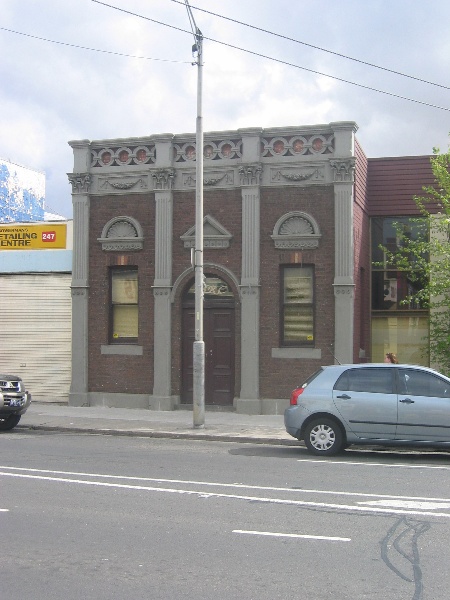 What is significant?
The Fidelity Tent No. 75 of the Independent Order of Rechabites commenced in 1868 and first met in the South Preston Wesleyan Chapel. This hall at 251-3 High Street, Preston was constructed c.1890 and remained the home of the Rechabites until the 1970s. It is now used by the Spectrum Migrant Resource Centre.

The building to the extent of the surviving c.1890 fabric is significant. This includes the facade and that part of the building between the street frontage and the modern rear addition.

Non-original alterations to c.1890 section and the modern rear addition are not significant.

How is it significant?
The former IOOR Hall at 251-3 High Street, Preston is of local historic and aesthetic significance to Darebin City.

Why is it significant?
Historically, the former IOOR Hall is significant as a now rare surviving example of a Rechabite Hall. It provides evidence of the Temperance movement, which was a powerful force in Victorian society and also reflects the strength of the Methodist faith in the Preston area. The Rechabites included many people who were prominent figures in the local community. The current use of the Hall by the Spectrum Migrant Resource Centre is also of interest as evidence of the influence of Immigration upon the cultural diversity of Darebin in the post-war era. (AHC criteria A.4, B.2, D.2, H.1)

Aesthetically, the former IOOR Hall is significant as a fine and externally intact example of a Victorian building with notable Classical detailing to the facade. (AHC criterion F.1)