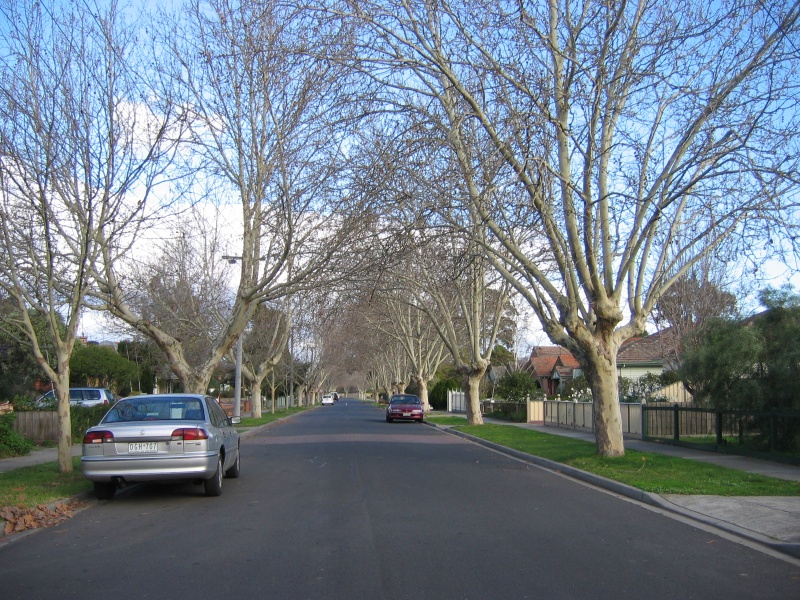 What is significant?
The Alphington (North) Precinct is a residential subdivision comprising housing and a small amount of commercial development dating from c.1915 to c.1945. The following elements contribute to the significance of the precinct:

- The contributory Edwardian and inter-war Bungalows and other inter-war houses of similar single-storey scale, form and siting that create cohesive streetscapes enriched by architectural features that are characteristic of this period such as the Arts and Crafts detailing, and sometimes complemented by original or early picket or woven wire front fences.
- The 'garden suburb' character created by created by the consistent siting of houses behind garden setbacks with low front fences, mature street trees that create a canopy of vegetation in many streets, and views to Pitcher Park at the centre of the precinct.
- The intactness of many streets to the original phases of development and the extent to which development in key phases from c.1915 to c.1945 is apparent.
- The groups of Inter-war shops in Wingrove Street.

Later alterations and additions to contributory houses and houses and buildings constructed after c.1950 are not significant.

How is it significant?
The Alphington Precinct is of local historic, architectural and aesthetic significance to Darebin City.

Why is it significant?
Historically, the Alphington Precinct is significant as evidence of important phases in the suburban development of Alphington particularly the rapid growth during the inter-war development boom that followed the electrification of railway to Heidelberg in 1921. Features such as the modest detached housing, a small shopping strip opposite the station, subdivision layout and public realm elements such as the mature street trees are characteristic of estates of the inter-war era. The former shops in Wingrove Street provide evidence of the practice where local shopping centres were established around railway stations. (AHC criteria A.4 &D.2)

The Alphington Precinct is architecturally and aesthetically significant as a fine example of an inter-war residential subdivision, which is notable for the consistent quality and scale of the built form, and the 'garden suburb' character which is enhanced by mature street trees and the central parkland. (AHC criteria D.2 & E.1)