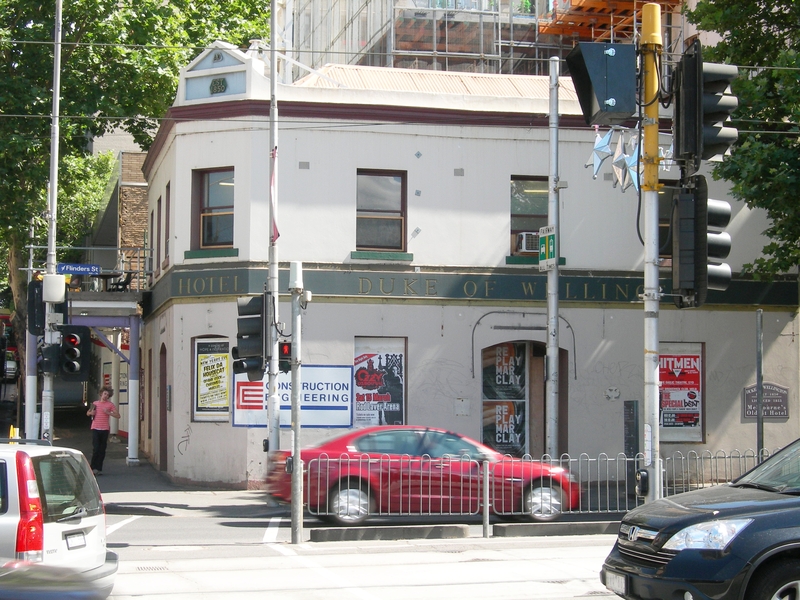 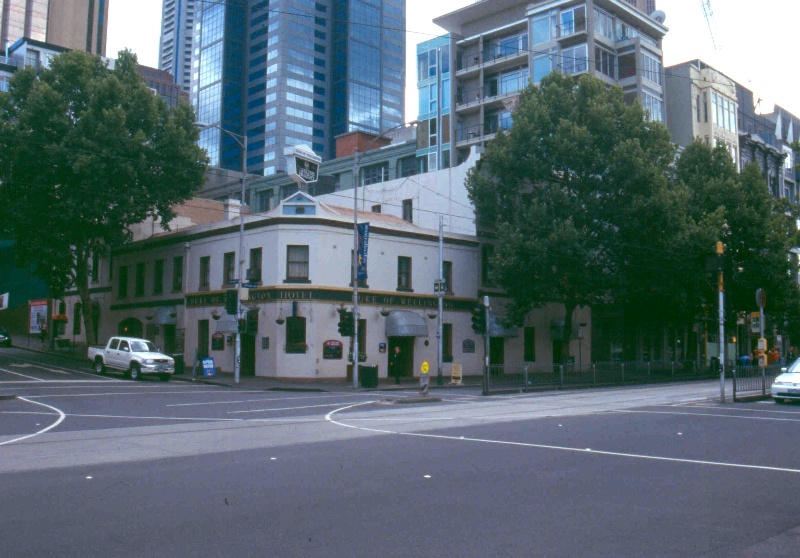 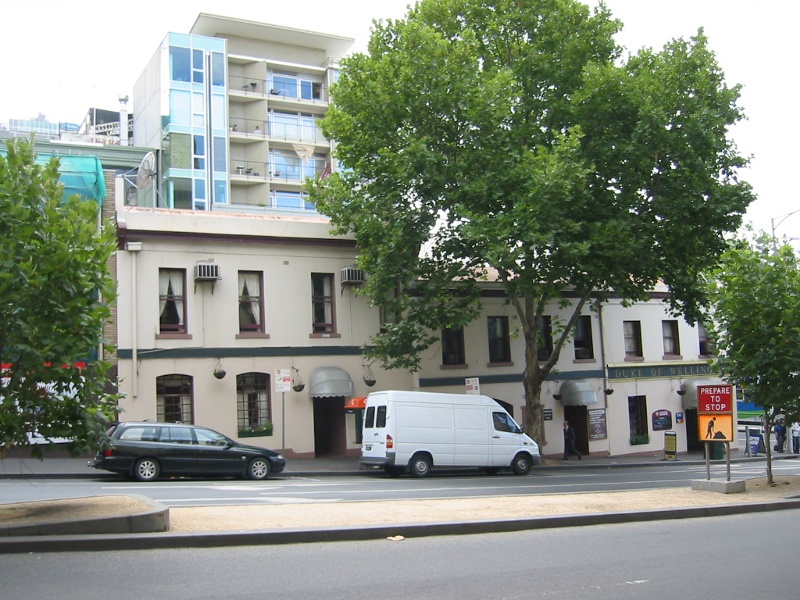 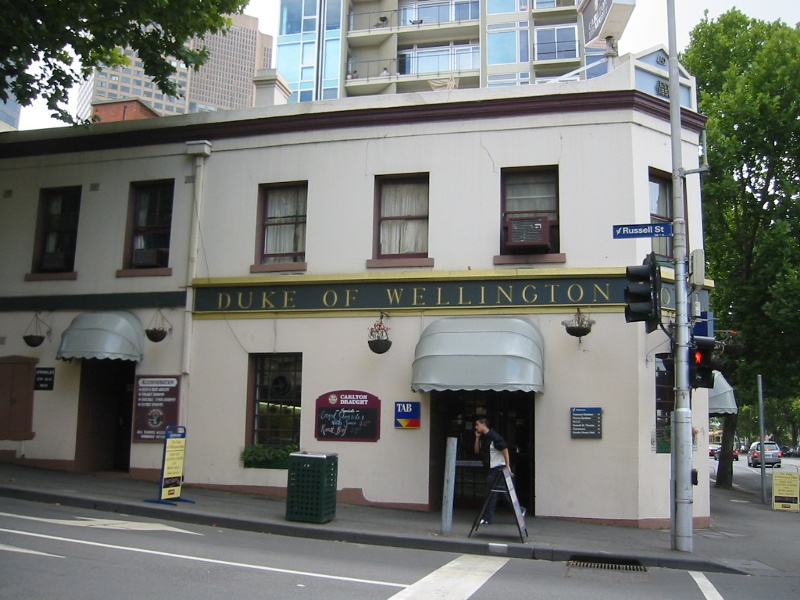 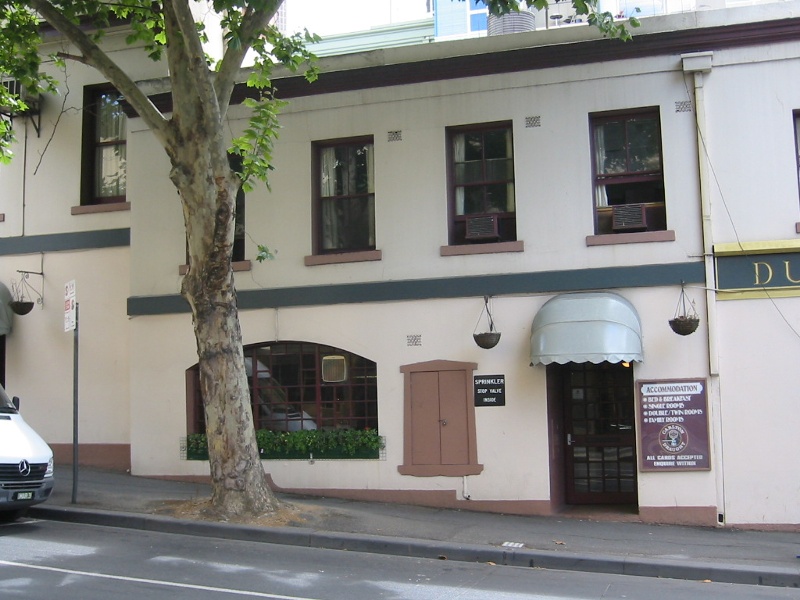 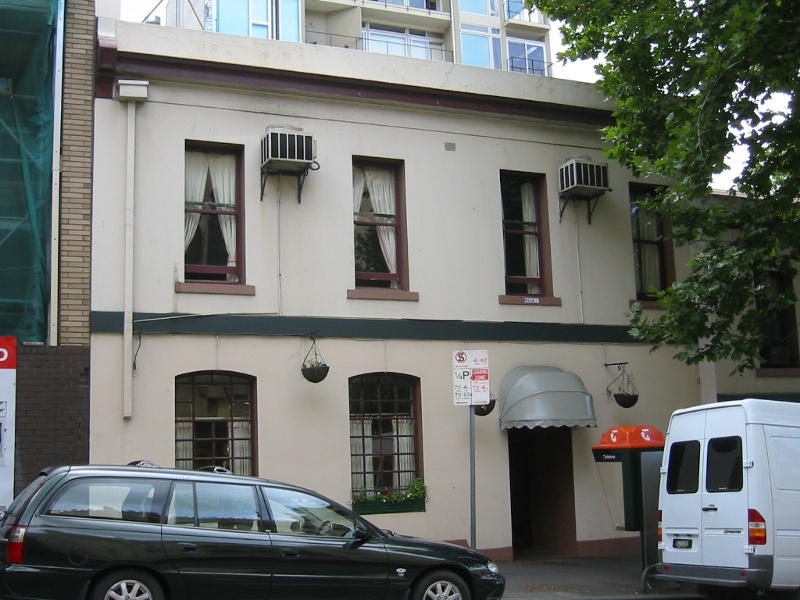 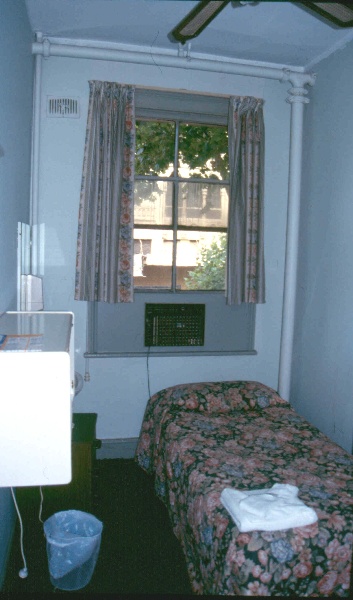 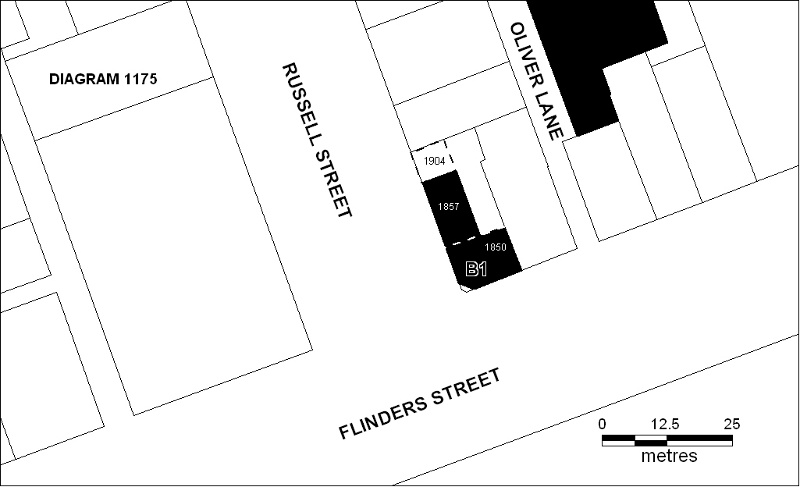 The Duke of Wellington Hotel on the corner of Russell and Flinders Streets, Melbourne is the product of the amalgamation of two buildings, a number of additions and numerous alterations. At its core is the initial two storey rendered stone corner building, built in 1850. This original building was added to in 1857 and again in 1904. The 1850 building had an articulated facade treatment of pilasters with rusticated banding and stepped recesses around the openings but this was all removed or rendered over in 1969. Despite these alterations the facade above the window sills at the first floor level, including the window openings appears unaltered.

While the building has undergone considerable change during its history and its external surface treatment and interior is far from being representative of a mid nineteenth century building, its scale and form is representative of its time and purpose. Corners were in great demand for hotel sites as they could address two street frontages. The Duke of Wellington is typical of the form employed for corner sites and this evident in the splayed corner which originally was the entrance.

The history of the building is unremarkable although William Kelly does mention sleeping there overnight in 1853 in his account of Victoria in the 1850s. The hotel has the honour of holding the longest running hotel licence in Melbourne. The Duke of Wellington appears to have been a working men's pub, presumably for warehousemen working in the Flinders Street warehouses and later for journalists from the Herald and Weekly Times .

The hotel operations also occupied part and finally all of the neighbouring building. Built in 1884 as a pair of three storeyed rendered brick warehouses, it was not to become part of the hotel until the early twentieth century when the upper floors became accommodation for the hotel. The ground floor housed two shops and they remained as such until 1960 when the rest of the building was finally incorporated into the hotel.

The 1904 and 1884 buildings are not considered to be of State-level significance, in contrast to the 1850 and 1857 buildings where the age of the fabric and the form, scale and siting of these buildings provide a relatively rare and representative example of an important pre and post-gold rush building type in Victoria.

The Duke of Wellington is of historical significance as a rare example of a pre gold rush hotel in Melbourne and for retaining its pre-1851 built fabric.

The building is also of architectural significance as being representative of an early hotel in form scale and siting.

The 1904 section was demolished with a permit, and the 1857 section demolished at the same time as it became unstable during the works in c2004.

Mac's Hotel in Franklin Street also opened in 1853, so unless the Duke got its licence a few months ahead, it may only be equal oldest licence holder in the City of Melbourne. Sometimes the Duke is claimed to have the been the longest continuously operating pub, but Mac's doesn't seem to have closed, while the Duke was closed between c2004 and 2013.