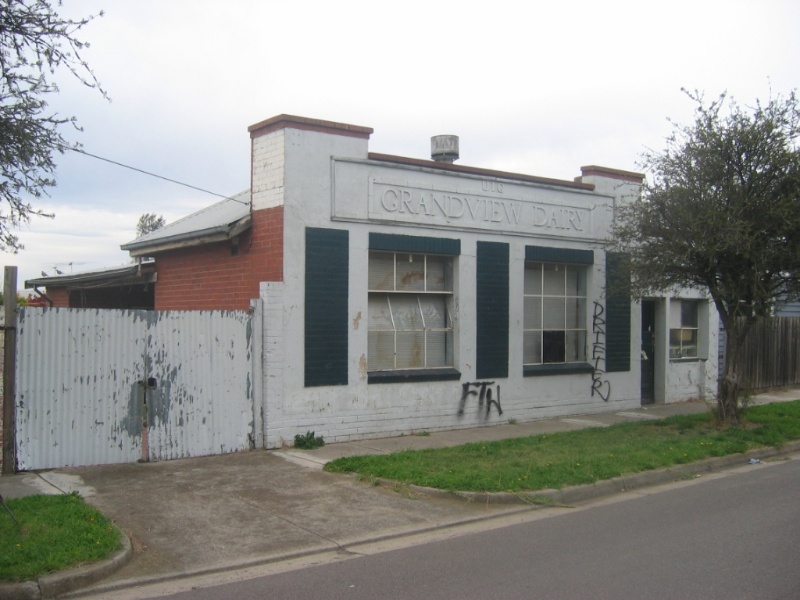 What is significant?
The former Grandview Dairy complex at 16 Young Street, Preston constructed c.1925 for George W. Brook is significant. The complex comprises an inter-war house facing Young Street with a dairy at the rear facing Harold Street. The house is a simple inter-war bungalow with gable roof facing the street and a smaller projecting gable forming a porch. The dairy is a rendered brick interwar building with the name 'Grandview Dairy' set into the render above the windows. It comprises a main symmetrically composed facade with a stepped parapet, which conceals the hip iron roof. There are two large metal framed windows divided into six frames. The entrance is via an adjacent section slightly setback and with a lower parapet with a doorway and a four-paned metal framed window. Behind the dairy, facing onto the driveway leading into the site can be seen a loading bay. There is a small brick and steel clad building at the corner of the site, which may be the building shown on the 1928 MMBW plan.

Later additions and/or alterations, including the front and side fences, are not significant.

How is it significant?
The former Grandview Dairy complex at 16 Young Street, Preston is of local historic significance to Darebin City.

Why is it significant?
Historically, it is significant as a now rare surviving example of the suburban distribution dairies established in Darebin and other Melbourne suburbs in the 1920s and '30s following the passing of the Milk Supply Act 1922, and in particular the 'model' dairies thatemerged after the establishment of the Milk Board in 1932. Such dairies were once common in residential areas of Melbourne but by the 1970s had disappeared or were converted to 'milk bars' as the production and distribution of milk was centralised into large factories. As a supplier of locally-produced milk the dairy is also significant for its association with the dairy farming industry in Preston, a practice that continued in the northern part of the area until the mid twentieth century. It also provides evidence of the development of essential services associated with an important phase of suburban development of Preston in the inter-war period. The house demonstrates how the early dairies were operated as family-run businesses by people who lived on the same site, a tradition that continued until the expansion of large centralised dairies in the post-war era. (RNE criteria A.4, B.2 & D.2)

The dairy is architecturally significant as a good example of a small inter-war neighbourhood dairy with Moderne detailing (RNE criteria D.2).