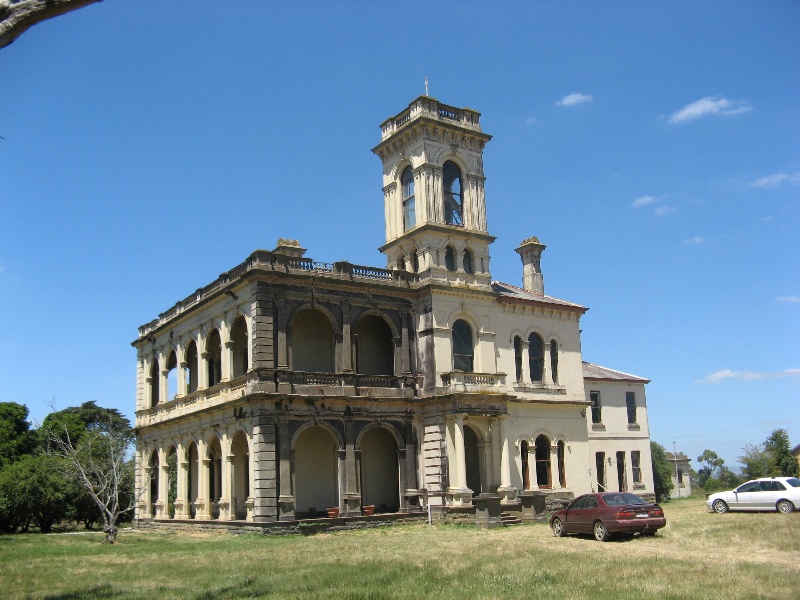 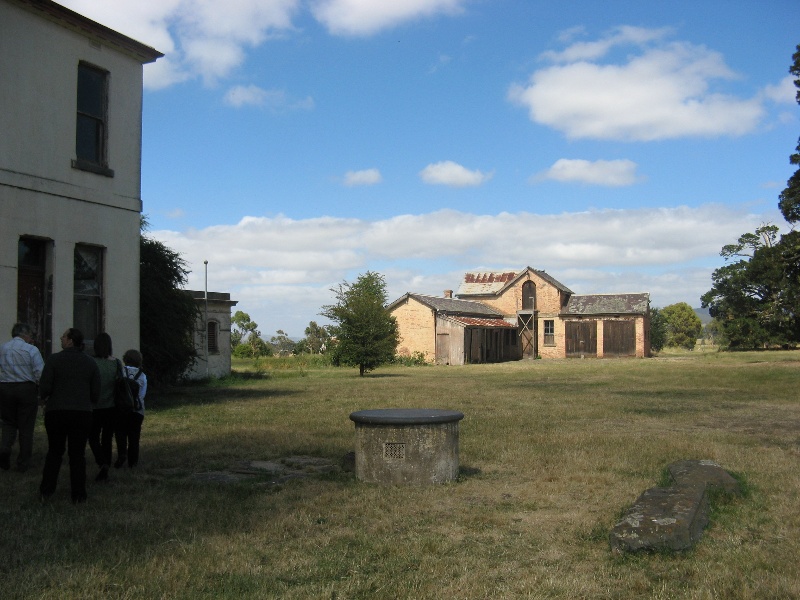 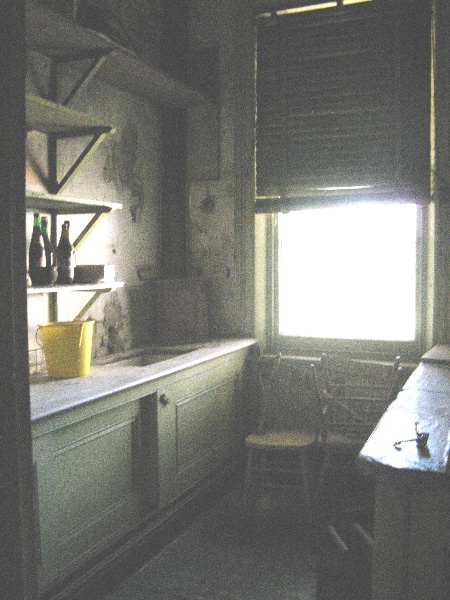 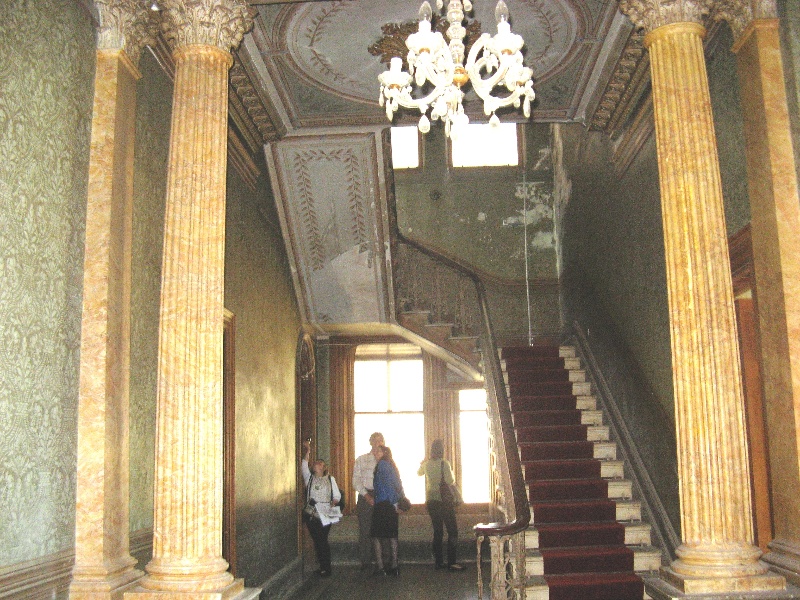 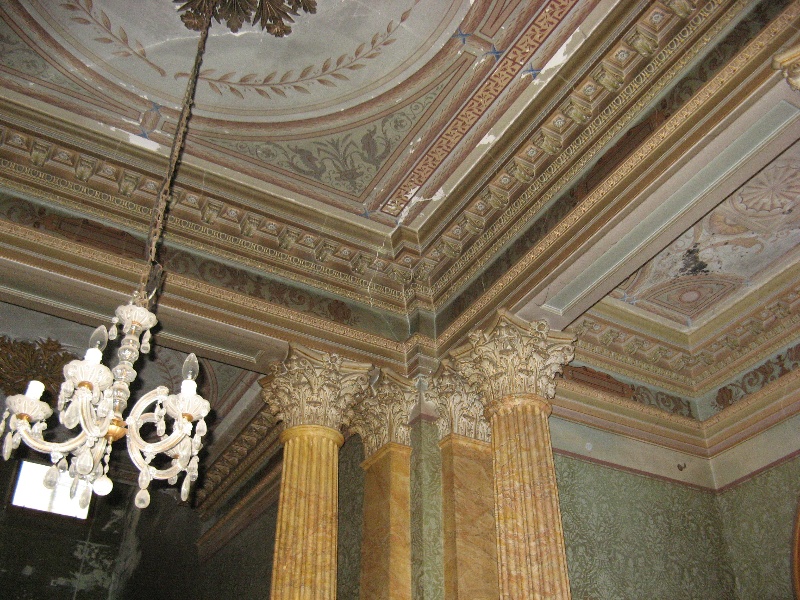 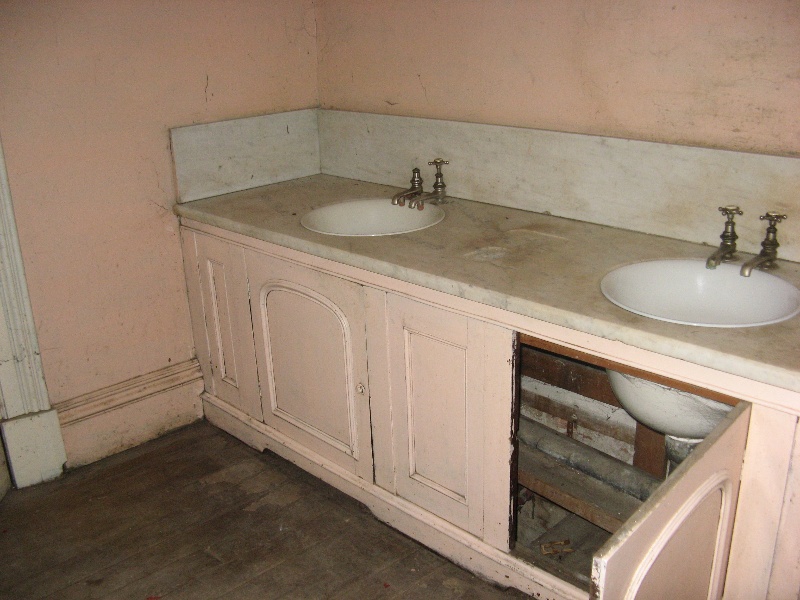 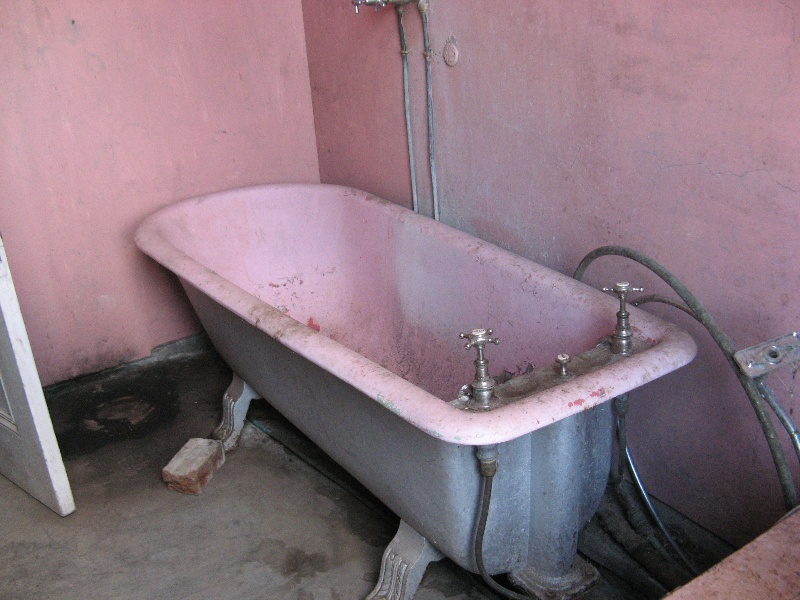 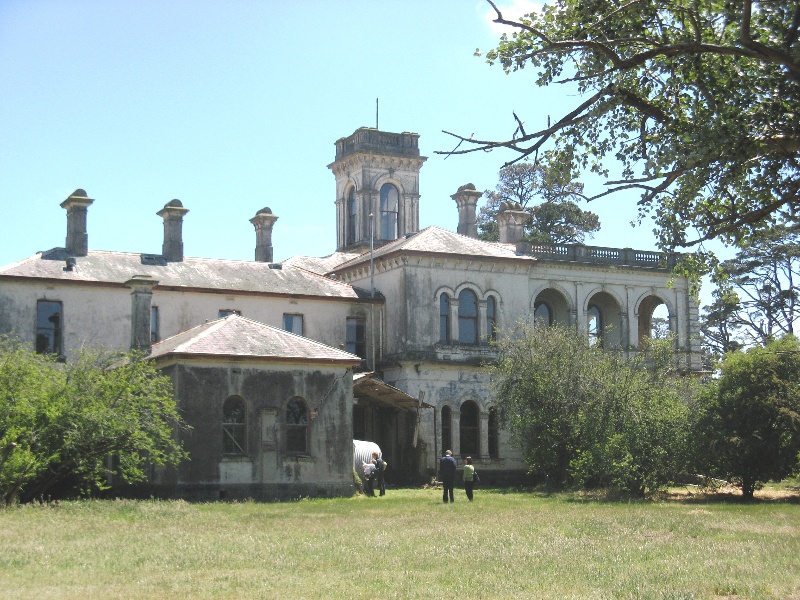 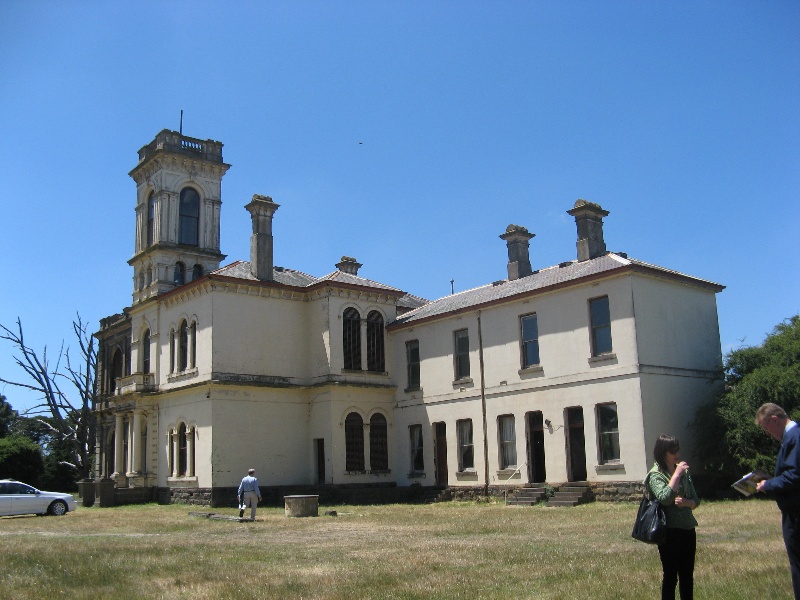 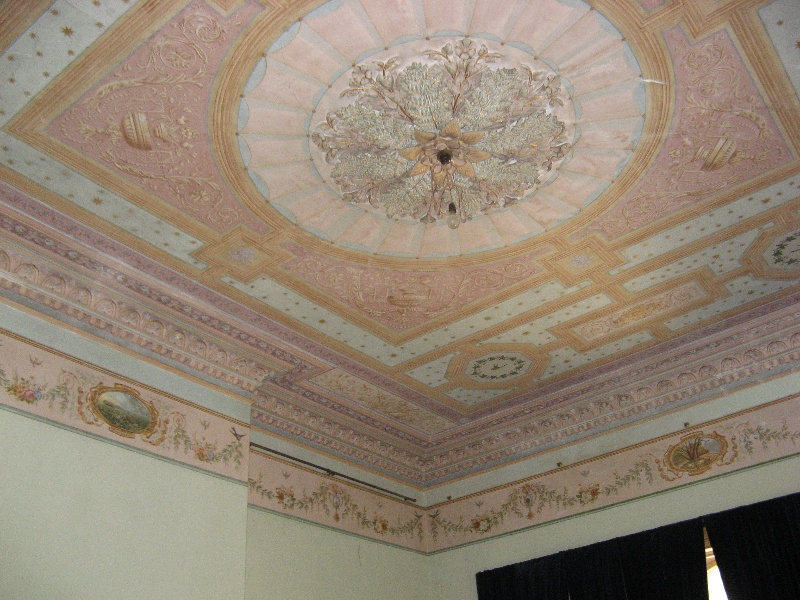 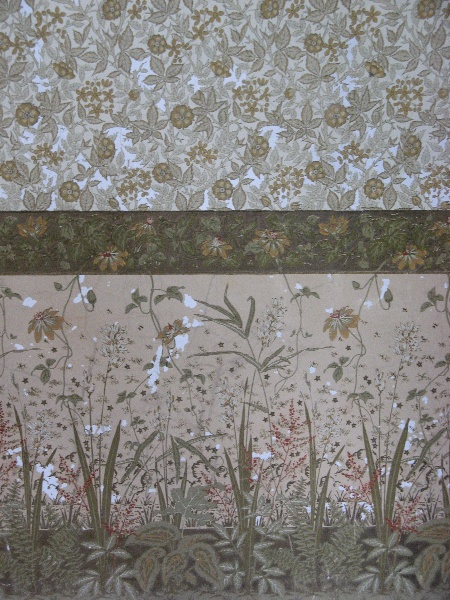 Mintaro is an 1881 Italianate mansion with associated outbuildings in a landscaped setting near Romsey, 58 km north of Melbourne.

The land on which Mintaro sits was part of a pastoral run taken up in 1844 by the Melbourne pioneer John Pascoe Fawkner. In 1860 the property was taken over by Captain Robert Gardiner, a Scotsman who had made a fortune in shipping, whaling, gold mining and grazing. In the late 1870s Gardiner commissioned the Melbourne architect James Gall to design a grand new house. In 1879 tenders were called for its construction and in April 1881 the Australasian Sketcher featured an engraving of the 'recently-completed' house, noting the contractors as 'Messrs Linacre, Parry, Bodkin, Adamson, Simpson, Hamilton and Hyde'. The interiors were designed by the distinguished German-born Melbourne decorative artist W Brettschneider. Following Gardiner's death in 1890 Mintaro was purchased by the Methodist Church and became the Mintaro Reformatory Home for Girls, where the girls were taught skills such as housework, cooking and laundry and dairy work. It was purchased in 1914 by Dr Crivelli as a family home. In 1934 the property was taken over by the Rea family, and after being used by the Army for barracks accommodation from 1941-46 remained in the Rea family until 2012.

The Mintaro homestead is a two storey rendered brick Italianate building with a two-storey loggia running across the front and a part way along two sides. The entrance porch on the north side has free-standing Doric columns and is surmounted by an impressive three storey tower with a belvedere. The two storey service wing to the west is lower and simpler in form. The elaborate and remarkably intact interiors are notable for their variety of surviving original finishes, including hand painted and printed wall and ceiling papers, painted stencilling and wood graining. Elaborate plaster mouldings and ceiling roses are present in many rooms as are marble fireplaces, light fittings, venetians, curtain rails and door and window furniture. All the plasterwork and joinery is marbled, wood-grained, gilded, stencilled or hand-painted and these are integral elements of the overall decorative schemes. All the different elements have been very creatively combined into interior schemes, with each room presenting a unified, richly decorative whole. The spectacular entrance hall features fluted Scagliola columns and Minton encaustic tiles. Opening off the entrance hall are the former drawing room, dining room, morning room and library, all with marble fireplaces and elaborate and largely intact decorative schemes. Three of the four large bedrooms upstairs retain their original wallpapers, with beautifully matched schemes with botanical and classical themes. Other notable intact areas are an original bathroom and a butler's pantry. Outbuildings comprise a small brick detached toilet, a brick stable and coachhouse, a woolshed and another shed which was once a working horse stable. The mansion is enclosed by a designed landscape providing a dense screen and windbreak on three sides. The original decorative gardens around the house have been largely lost, but the property retains a number of outstanding or rare species, including a very rare Ulmus 'Viminalis', Hesperocyparis benthamii, Hesparocyparis macnabiana, Pinus roxburghii, and six Juniperus virginiana, all only known in a few other locations.

Mintaro satisfies the following criterion for inclusion in the Victorian Heritage Register:

Mintaro is significant at the State level for the following reasons:

Mintaro is an outstanding and largely intact example of the mansions constructed in Victoria in the 1880s during the colony's Boom period. It reflects the prosperity of the colony at the time, and the money that wealthy individuals were prepared to spend to demonstrate their success. (Criterion A)

Mintaro is a rare and relatively intact surviving example of a Boom period mansion with an intact interior decorative scheme. Interiors at this time were extremely elaborate, but intact surviving examples are rare. Mintaro is one of the few houses where the original or early fabric of the decorative schemes for entire rooms survives and is still visible. Notable features include the variety of painted finishes such as stencilling, marbling and wood graining, intact wall and ceiling papers, original gas light fittings, door furniture, tiles and window dressings. The presence of intact cabinetry and decorative schemes for functional and servants' areas such as the bathroom and butler's panty is also rare. (Criterion B)

The Mintaro planting features several trees rarely cultivated in Victoria. The Ulmus 'Viminalis' which is unusually grafted at about 2m, is one of only four known examples in Victoria, the other three all being in the Benalla Botanical Gardens. The perimeter windbreak around the property includes the rarely grown Hesperocyparis benthamii, Hesparocyparis macnabiana, Pinus roxburghii, and six Juniperus virginiana, all only known in a few other locations. The large number of Juniperus is unknown in any other planting in Victoria. The variety, size and maturity of species of Quercus, Ulmus, Photinia, Morus, Crataegus, Laurus, Pinus, Cupressus and Hesperocyparis, Cedrus, Araucaria and Sequoiadendron are significant. (Criterion B)

Mintaro is an outstanding and intact example of a Boom period country mansion, and demonstrates the principal features of such houses, which were designed to demonstrate the status of their owners. They were typically were two-storeyed, in a Classical style, most often with a tower, had a picturesque form with asymmetric massing and planning, and elaborately decorated interiors. (Criterion D)

The intact decorative schemes are rare surviving and outstanding examples of the highest level of interior decoration available in Victoria in the 1880s. The designs, colour schemes and textures of the original materials and artwork provide a rare opportunity to experience the elaborate aesthetics of 1880s interiors. (Criterion E)

The Mintaro homestead complex sits within an outstanding designed landscape created from 1881 to the 1920s. The serpentine avenue of Monterey Pine along the driveway is entered through decorative gates and sweeps through an extensive parkland and dense perimeter planting. The perimeter planting is laid out to create an internal scalloped edge and includes a large variety of conifers and a few broadleaf and deciduous trees of contrasting foliage and colour. (Criterion E)

Mintaro is also significant for the following reasons, but not at the State level:

Mintaro is of local significance for its association with one of the prominent early landowners in the area, Captain Robert Gardiner, who owned Mintaro from 1860 until 1885 and with the architect James Gall. (Criterion H)