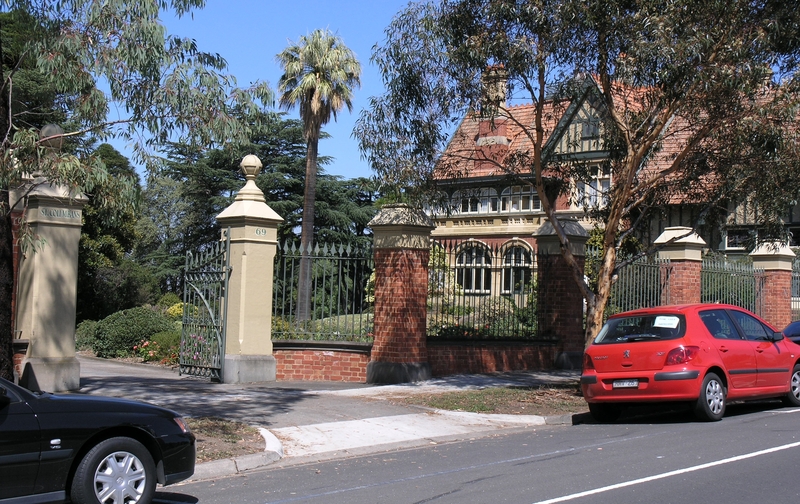 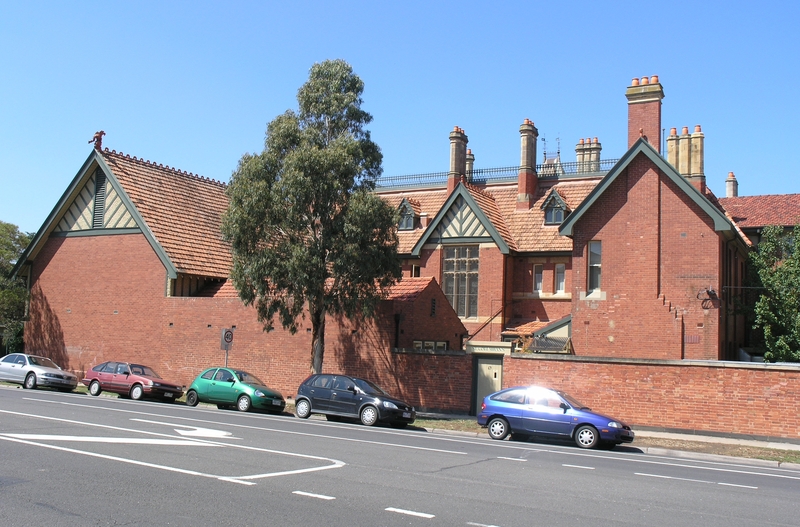 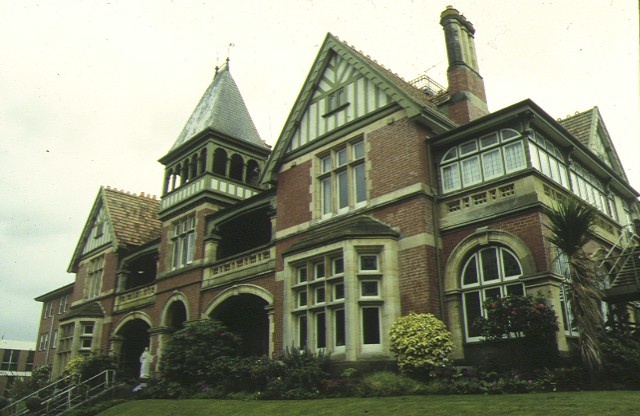 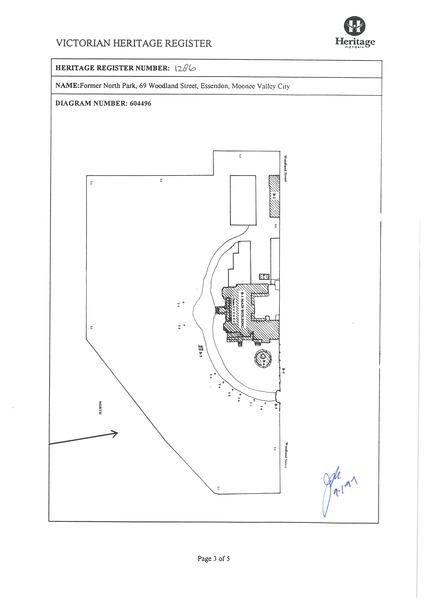 North Park, now known as the Australian Headquarters of the St Columban Mission, was the home of Alexander McCracken, renowned brewer and sportsman. The 42 roomed mansion was built in 1888 by builder D. Sinclair for the cost of £10,750 to the design of Henry Kemp of the prominent Victorian architectural firm of Oakden, Addison & Kemp. In the tradition of the baronial mansions of wealthy British industrialists, the residence was built to symbolise its owner's prosperity and achievements. The large, two storey, picturesque residence is set on the highest point of Essendon and anticipates the popular Queen Anne Revival style in its use of red brick for walls, half-timbering with roughcast in the gables, orange terracotta tiles, ornamental bargeboards, decorative finials and chimneys, and ornate glazing. Three ornately carved chairs survive from the furniture which was designed to complement the elaborate interior. A spacious ballroom was added to the ground floor in the early years of this century which now serves as a chapel. A new wing was added to the house in 1966, and a new office building replaced the original stables in 1968. The coach house was retained except for a small section on the south side. Alexander McCracken died in 1915 and in 1923 North Park became the Australian headquarters of the St Columban Mission.

The former North Park is of architectural, historic, and aesthetic importance to the state of Victoria.

The former North Park is architecturally important in demonstrating a high degree of creative achievement, being a pioneering example of the Queen Anne Revival domestic architecture in Australia. This style became the dominant expression in Australian domestic architecture in the decades immediately before and after 1900. The house is architecturally important for its use of imported Marseilles terracotta roof tiles in possibly their first application in Australia. Made by the French company, Guichard Carvin de Cie, St Andr, these unique tiles feature the firm's signature bee imprint. The interior is architecturally important for its rich decoration including multi-coloured pressed metal ceilings, plaster friezes, timber panelling, encaustic tiling and elaborate stained and coloured glass. Other important extant detail includes ornate door knobs and push plates, and gas light hardware. Three ornately carved chairs in the entrance hall dating from the McCracken ownership are important for their continued association with the house.

The former North Park is historically important for its association with renowned brewer and sportsman, Alexander McCracken (1856-1915) and its imposing massing and design reflect his position and achievement in Melbourne's industry and his standing in local society. Alexander McCracken is an important historic figure in the brewing industry but was also a founder, secretary and then president of the Essendon Football Club. He was also the first President of the Victorian Football League, and Chairman of the Royal Agricultural Society. North Park is of historical interest as the Australian Headquarters of Saint Columban's Mission since 1923.

The grounds of North Park are of aesthetic importance as an outstanding example of the gardenesque style and for the unusual three curved terraces, wide drive, garden path remains, and the evergreen trees and large conifers which contribute to the picturesque profile of the overall composition. The circular fish pond (disused) with its central figurine fountain and random rubble base is of unusual design and an important garden element now uncommon in Victoria. The location of this structure opposite the ballroom bay window is an important design feature. The cast iron gates, fence and hand gate supported by dressed bluestone are of an outstanding design, with particularly large spears and large scale iron members. The coach house and gardener's shed are important contributions to the interpretation of a late nineteenth century large house and garden.