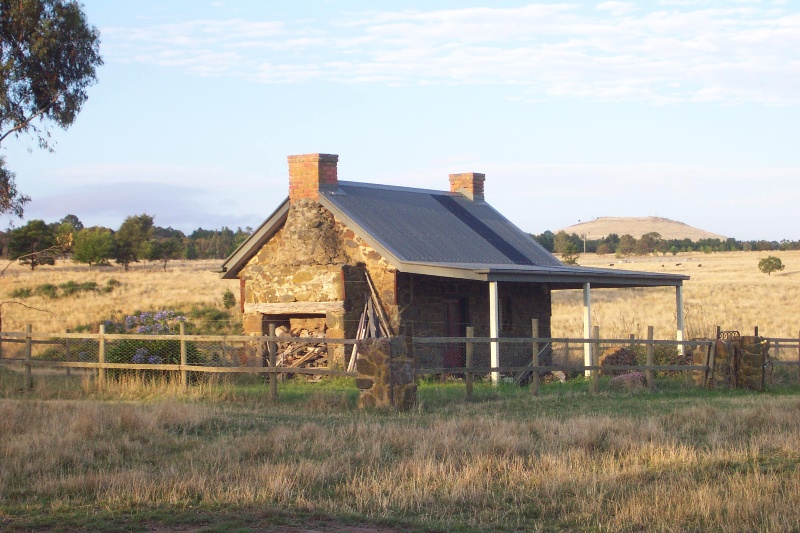 The Cottage at 189-193 Blackhill Road, Toolern Vale, is significant as an altered example of a Victorian vernacular style small cottage, one of few surviving buildings in the Shire associated with the Selection era, and possibly also a rare place associated with the earlier squatting era. The building dates from at least the 1860s, and may be as early as the 1840s.The Cottage at 189-193 Blackhill Road is of architectural interest. Although altered, the cottage still demonstrates some original design qualities of a Victorian vernacular style. These qualities include the simple gable roof form, random rubble wall construction, single storey height and the modest scale. Other intact or appropriate qualities include the random stone chimney breasts, single door and window openings and the location and form (if not the extent) of the front skillion verandah. The corrugated profile sheet metal roof cladding is also appropriate, although not original or early. The Cottage at 189-193 Blackhill Road is historically significant at a LOCAL level (AHC A4, B2, D2). It is a scarce example of a surviving building in Melton Shire associated with the Selection Acts, and a rare example of a reasonably intact stone dwelling from that period. There is some evidence that the building dates to the earlier period (1840s) of John Aitken's Mount Aitken squatting run. Aitken has been credited as being Victoria's first inland settler. He was the second settler (after John Batman) to bring sheep to Port Phillip, and was the colony's leading flockmaster in its early decades, revered for having improved merino sheep more than any other. The timber portion of the dwelling was destroyed in a fire c.1945, and the remaining stone portion is testament to the major role of bushfire in the Shire's history and heritage. An incomplete ring of stone walls that survives, in poor condition (some non-professionally repaired) around the crown of the hill to the south (on an adjacent property), associated with either the selection or pastoral eras, is contributory to the significance of the place. The Cottage at 189-193 Blackhill Road is socially significant at the local level (AHC G1). It was identified as a place of heritage significance to the local community in a community forum held as part of this heritage study, and was visited in an early Melton and District Historical Society excursion. Since c.1970 its heritage values have been recognised by successive owners, who have conducted various repairs to the place, and by photographers and artists. The Cottage at 189-193 Blackhill Road is scientifically significant at a LOCAL level (AHC C2). The cottage and dry stone walls may provide archaeological evidence of local historical significance regarding early pastoralism.

Overall, the Cottage at 189-193 Blackhill Road, Toolern Vale is of LOCAL significance.