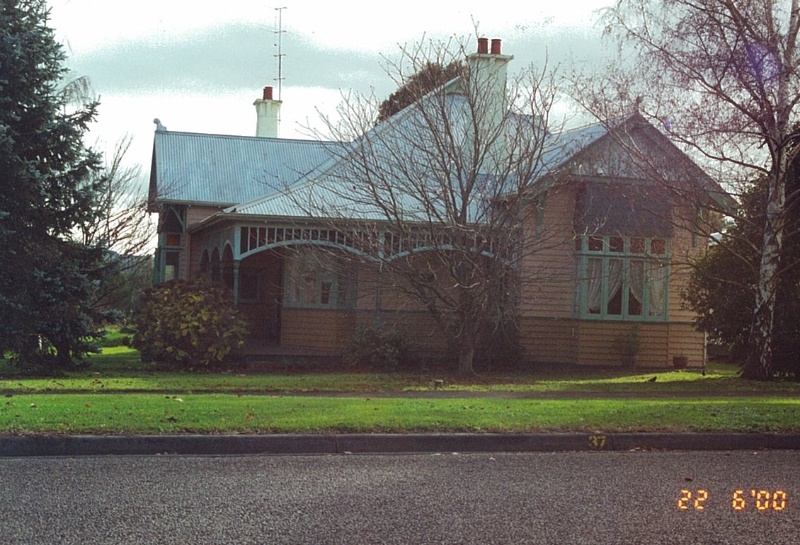 What is significant?
'Egerton', comprising the house and stables constructed c.1915 by F.W. Morris as his own residence and later occupied by James T. Knox, at 37 Jeffrey Street, Leongatha is significant. It is a characteristic Federation Queen Anne timber villa with a corrugated iron hip and gable roof, contiguous return verandah at a lesser pitch and weatherboard walls. Other notable elements include:

At the rear are early gabled timber stables, which have a small rectangular door in the west-facing gable and a smaller square door/window in the east gable.

Non-original alterations and additions to the house and stables and other buildings on the site are not significant.

How is it significant?
'Egerton' at 37 Jeffrey Street, Leongatha is of local historic and aesthetic significance to South Gippsland Shire.

Why is it significant?
Historically, it is associated with an important phase of development in Leongatha during the early twentieth century and is representative of the fine villas erected for local business people as the town prospered. It is also important for its associations with the noted engineer, Mr J.T. Knox, who developed Knox's Quarry and the Rockhill Farm at Nerrena. (Criterion A, D & H)

Aesthetically, it is a superior example of a Federation Queen Anne style house with fine and characteristic detailing, which is complemented by a rare example of an early stables. The significance of the house is enhanced by its high degree of integrity. (Criteria B & E)