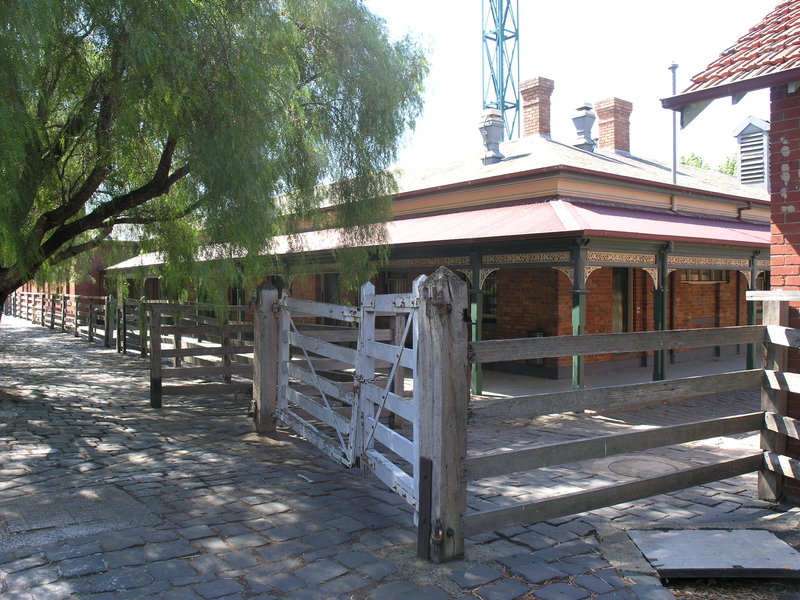 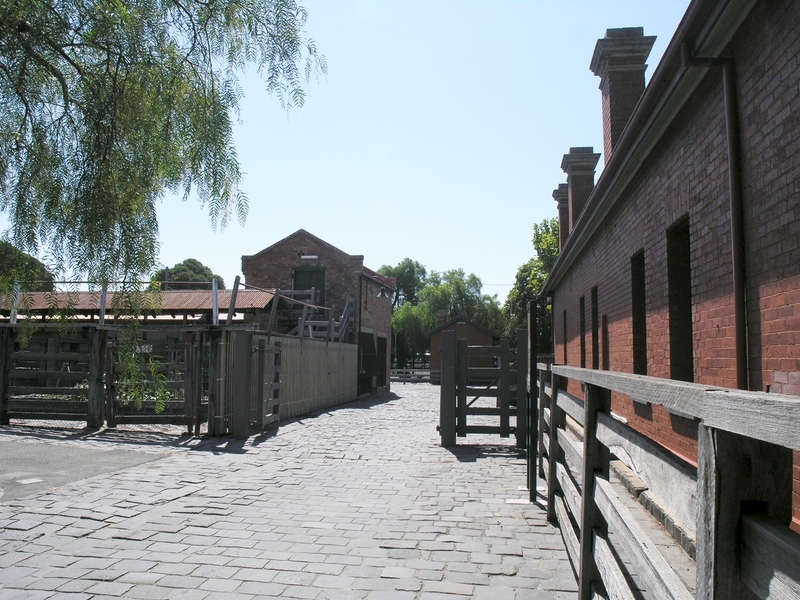 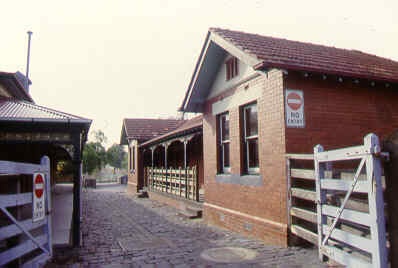 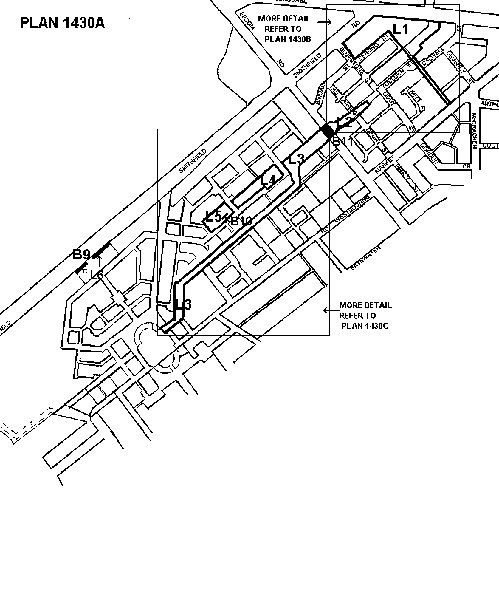 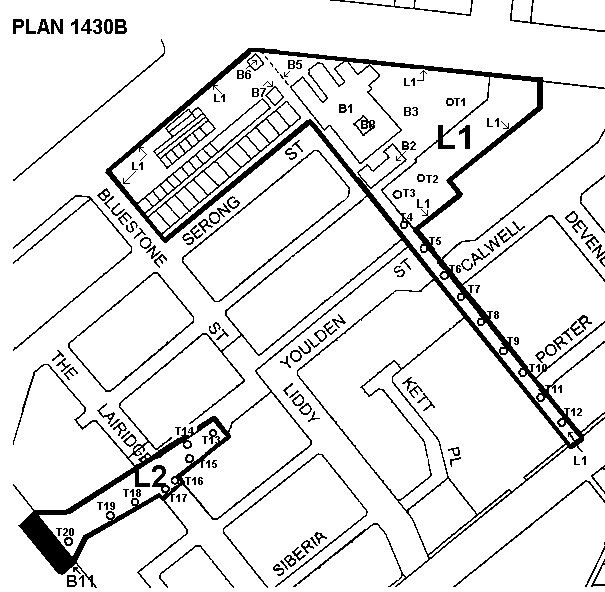 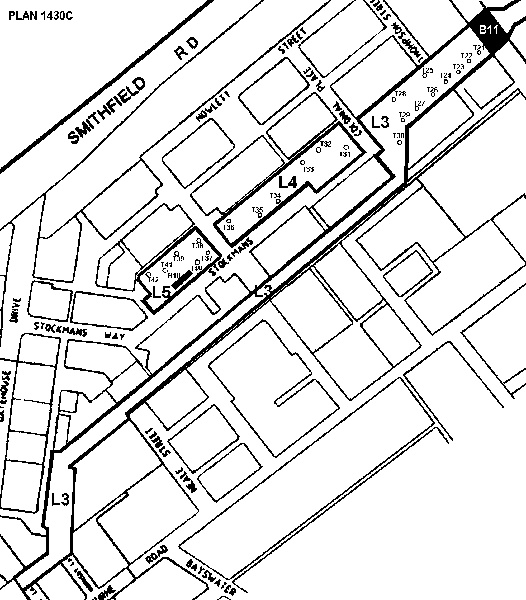 In the late 1850s, the Melbourne City Council decided to move its cattle yards from the corner of Elizabeth and Victoria Streets to a more distant location in the then semi rural district of Flemington. Land was granted in 1856 to the Newmarket saleyards and they were completed in 1858 with the first sales held in January 1859. Served by the extension and refurbishing of the Essendon to Melbourne Railway in the 1870s, by 1888 almost half a million animals passed annually through the markets and in the twentieth century it became the world?s biggest livestock auction market. Behind the markets, stretching to the Saltwater River, were the abattoirs; the building of which commenced in 1861. The former City Abattoirs were located on a site of 57 acres bounded by Smithfield, Epsom and Westbourne Roads and the Maribyrnong River, which was granted to the Melbourne City Council on 30 August 1856. The location of the Saleyards in proximity to the metropolitan area enabled both the local and the export trade to be supplied, and for a long time the sales were regarded as a barometer for process throughout the State. The Epsom Road Bridge and subway was constructed in 1911 and was designed by John Monash?s Company, the Reinforced Concrete and Monier Pipe Construction Co. It was constructed to cater for the increased livestock movement from the Saleyards to the Abattoirs, which was causing problems for residents and for traffic in the area. The Saleyards and Abattoirs were closed in 1985 and have subsequently been developed for medium density housing.

The early administration building constructed c.1874 survives on the saleyards site. It is a square planned red brick structure with a central courtyard. The slate roof is hipped and the buildings feature cast iron lacework. On the western side of this building is a series of extensions dating from c. 1911 and c. 1919. In the open courtyard stands a clock tower built c.1939. Most of the yards were demolished in 1987-88 but a small area of cattle pens and some fencing remain. The only building remaining from the abattoirs is the administrative, quarantine and workshop complex. Built c. 1903, it has central gates, which face Smithfield Rd. It is a red brick building, which displays neoclassical elements of the Edwardian period with pediments to the gables and pilasters and corbelled bands framing the windows. Sections of the bluestone paving and plantings along the stock route and former holding yards have been retained. The route is bluestone paved and tree lined before it runs under the road via the stock subway. From the underpass it proceeds into the Abattoirs site adjacent to the holding yards and then along the rear of this site down to Hobson?s Rd.

Newmarket Saleyards and Abattoirs are of historical, social and architectural importance to the State of Victoria.

The former Newmarket Saleyards and Abattoirs are of historical and social importance as they were the centre for livestock sales and related secondary industry in Melbourne until the 1980s, covering a span of over 130 years since their first establishment. By 1940 the saleyards were the biggest sheep and land market in the world and one of the three largest for cattle sales. The former abattoirs are of historical importance as they were the largest public abattoirs in Victoria and played a key role in developing and maintaining the local meat industry in the State. The Saleyards and Abattoirs are the most tangible link between the pastoral industry and the meat industry, which gave such impetus to Victoria?s economic development from its first settlement. They are significant for their contribution to the industrial history of Melbourne, as they were the lifeblood for the area and a major stimulus for development. The Abattoirs Bridge is historically significant as an important part of the former Newmarket Saleyards and Melbourne Abattoirs site, having been built as part of the improvements required for Australia?s growing meat export trade early in the twentieth century.

The former Newmarket Saleyards and Abattoirs are of architectural importance as the complex of offices and associated buildings represent a sequence of construction and expansion of the market in designs typical of their representative periods. The buildings along with the remaining sale pens and the stock route reflect the development and importance of the saleyards and abattoirs as a central focus for the livestock industry. The significance of these buildings lies in their architectural form and their references to the lost process buildings. They are a rare intact example of substantial buildings relating to saleyards and abattoirs. The significance of the stock route largely relates to the visual and conceptual link that it provides between a number of related sites. It encapsulates the process of movement of animals through the site to different parts of the handling process. The Epsom Road Bridge is significant as an intact representative example of the innovative work of John Monash and the Reinforced Concrete and Monier Pipe Construction Co. The bridge has some unique design features demonstrating its use as an underpass.