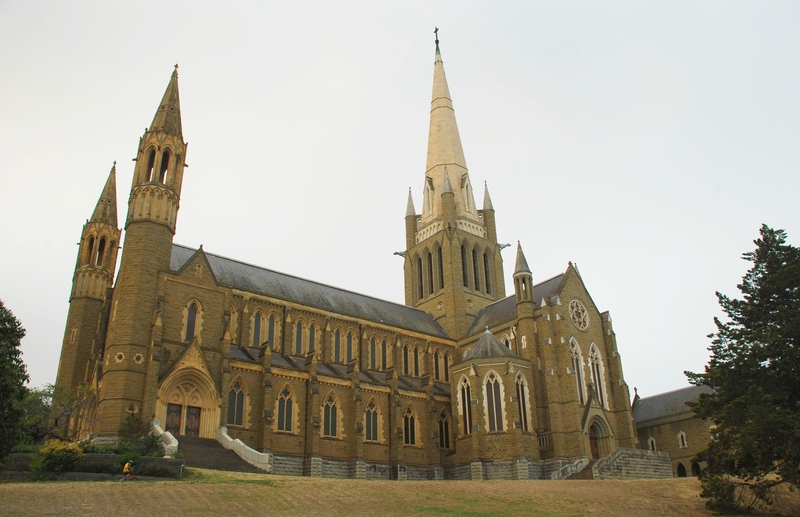 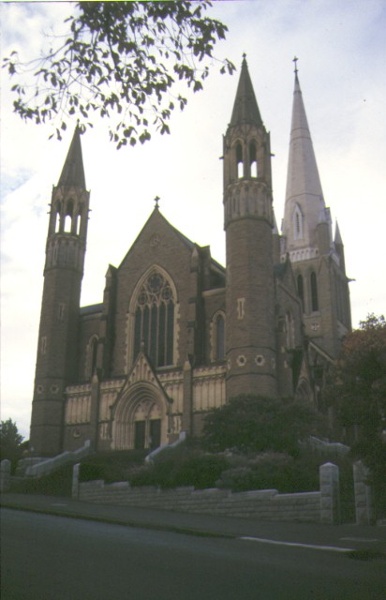 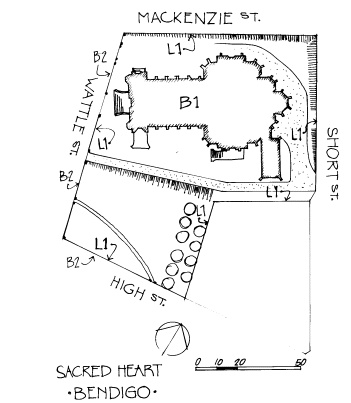 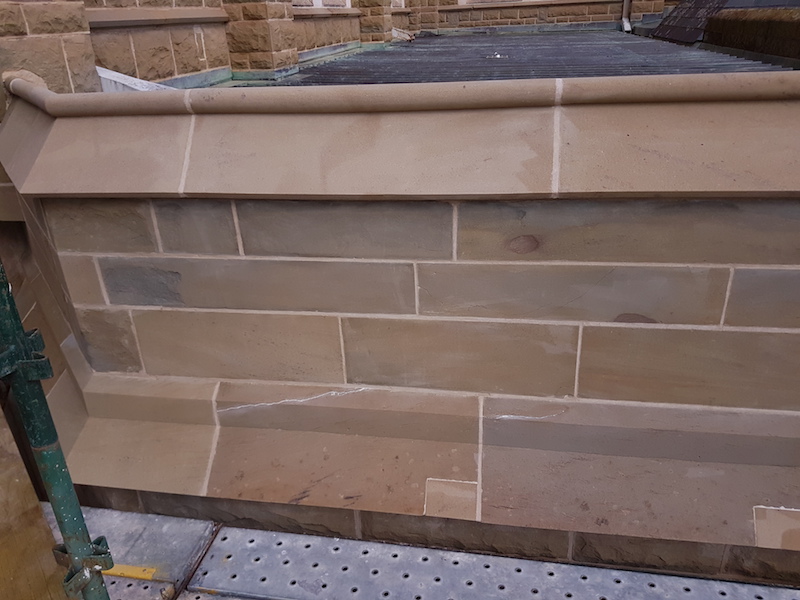 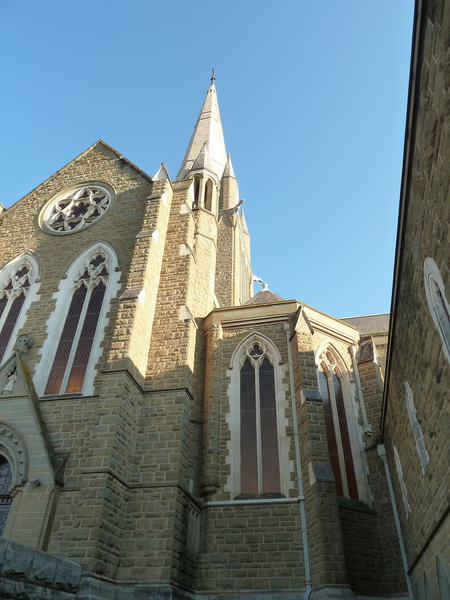 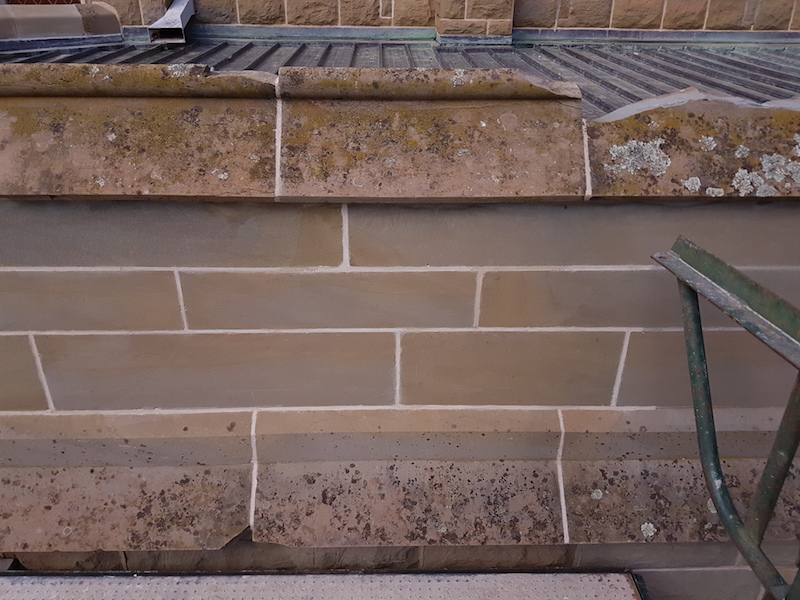 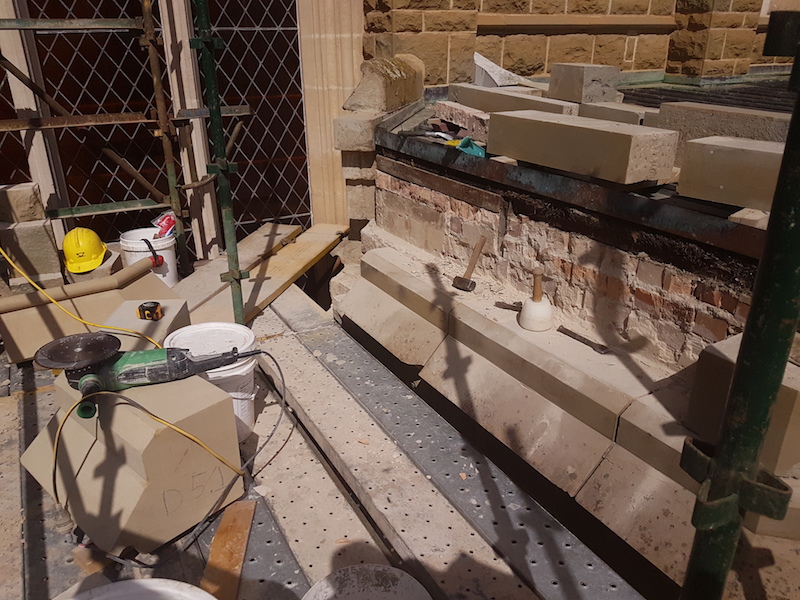 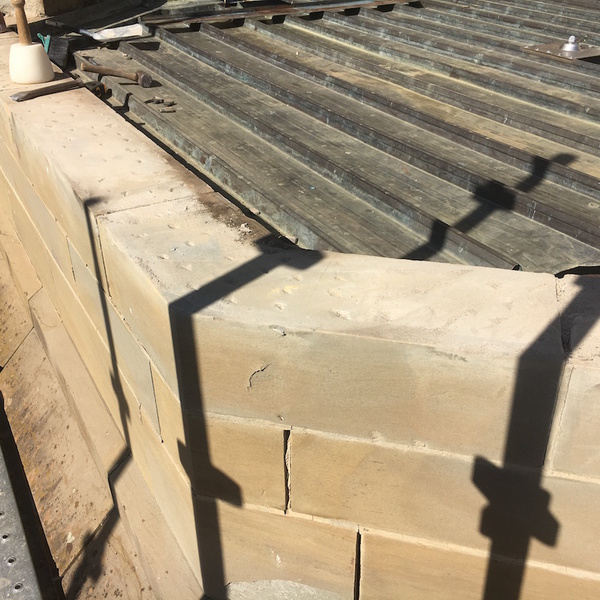 It was originally intended that a Roman Catholic cathedral would one day be built on the site occupied by St Kilian's Church in McCrae Street, Bendigo. However land on one of the highest points of the city became available in Wattle Street which was part of the extensive estate of Rev. Father Dr Henry Backhaus (1811-1882), pioneer clergyman of the Roman Catholic Church, Bendigo.

Designed by Reed, Smart and Tappin, construction of the Sacred Heart Cathedral, Bendigo commenced in 1896, with the foundations, and the aisle, the nave and lantern towers built by 1901. Work ceased for lack of funds in 1908, and it was not until 1954 that construction recommenced, with completion achieved in 1977. The church comprises a seven bay nave, narthex, crossing, apsidal sanctuary, three-bay transepts, and four octagonal chapels flanking the crossing. The exterior is dominated by a crossing tower and spire, and the west front with prominent flanking turrets. The interior features an oregon and kauri hammerbeam roof, west window by Hardman, and a divided organ built in 1904 by Bishop & Son, London. The floors, altars and font are crafted from a variety of marbles, and the pews are of blackwood. The twentieth century work was largely executed by sixteen craftsmen, most of whom were Italians brought to Australia expressly for the purpose.

The Sacred Heart Cathedral is of architectural, historic, and aesthetic importance to the State of Victoria.

The Sacred Heart Cathedral is architecturally important as Australia's largest provincial church. Constructed in sandstone and local granite in an authentic Decorated Gothic style, the church is significant as the only cathedral in the State to be completed in this style this century. It closely follows the original 1895 design of William Brittain Tappin (1854-1905) and the nave is an important legacy of some of the finest Victorian period ecclesiastical architecture in this country. The interior is architecturally important for its superb spatial proportions, fine hammerbeam roof, and monumental compound
piers and arched arcades.

The Cathedral is aesthetically important as a landmark building set high on a grassy knoll. The Cathedral and its setting dominates High Street.

The Cathedral is also aesthetically important for its internal and external decorative detail. Significant fixtures and fittings include carved stonework, stained glass particularly that in the west window, blackwood pews, timber panelling, and the organ. Notable external fixtures include the cast aluminium spire gargoyles, decorative cast iron balustrading and lamps, door strap-hinges, and the perimeter fence. Important movable objects include the Stations of the Cross painted by prominent nineteenth century Italian ecclesiastical artist A.F.D. Cavallaro which are framed in ornately carved
walnut timber, the eagle lectern a gift of Bendigo's quartz king, George Lansell, the Bishop's Chair with its associated chairs carved by Ferdinand Stuflesser from Austrian oak, and the McCormick baptismal font.

The Cathedral is historically important for its association with Rev Dr Henry Backhaus, pioneer clergyman of the Roman Catholic Church on the Bendigo goldfields, whose estate provided the land for the building. The Cathedral has further associations with Rev Martin Crane, first Bishop of Sandhurst from 1874-1901 who initiated the building of the cathedral and donated the west window; and with Bishops Stephen Reville (1901-1916), John McCarthy (1917-1950), and Bernard Stewart (1950-1979) who worked towards the completion of the building.