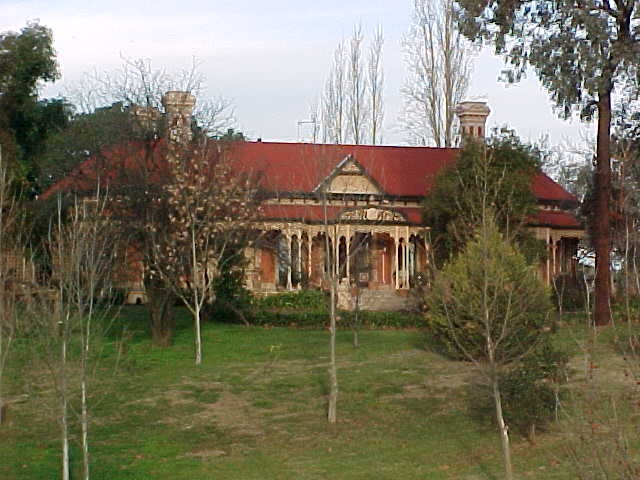 What is significant?
Cambourne homestead was built by 1903 for Rebecca S. Carkeek, who purchased the property in Wodonga in 1899. It remains in the ownership of the family, however on a reduced allotment due to the acquisition of land in 1972 by the Country Roads Board and in 2006 by Vic Roads for road works adjacent to the property.

Cambourne is situated on the original Wodonga run which was established in 1836. The township of Belvoir, renamed Wodonga in 1874, was surveyed in 1852, and in 1855 the pre-emptive right of 171 acres of the Wodonga run was granted and sold the following year. The property was subdivided and the allotments, upon which the five acre Cambourne property developed, were purchased in 1873 and 1876, coinciding with the opening of the railway from Melbourne. After a series of owners, the property was purchased by Rebecca Carkeek in June 1899, wife of William Carkeek, publican of Wodonga and shire councillor.

The prolific local architects Gordon and Gordon have been credited with the design of Cambourne. Although this has not been substantiated, architectural similarities and family information appear to confirm this conjecture. This firm designed a large number of public and private buildings in Wodonga and Albury, and Carkeek would have been familiar with their work.

A stable building and detached toilet appear to be contemporary with the house, while a flat was built adjoining the north verandah c1940 and the present laundry replaced the original laundry c1960.

How is it significant?
Cambourne, Wodonga is of architectural and historical significance to the State of Victoria.

Why is it significant?
Cambourne, Wodonga is of architectural significance as a largely intact late Victorian style house with elaborate decorative cast iron work and distinctive transverse plan. As a probable work of architects Gordon and Gordon, it is amongst their best preserved and one of their few surviving buildings in Victoria. Others include Fairfield, Browns Plains (VHR H0700) and the National Bank, Benalla (VHR H1056). The retention of the original stables and toilet building adds to the significance of the remaining estate.

Cambourne, Wodonga is of historical significance due to its links with the early settlement of the district and as an illustrative example of closer settlement which occurred in regional centres of the State.