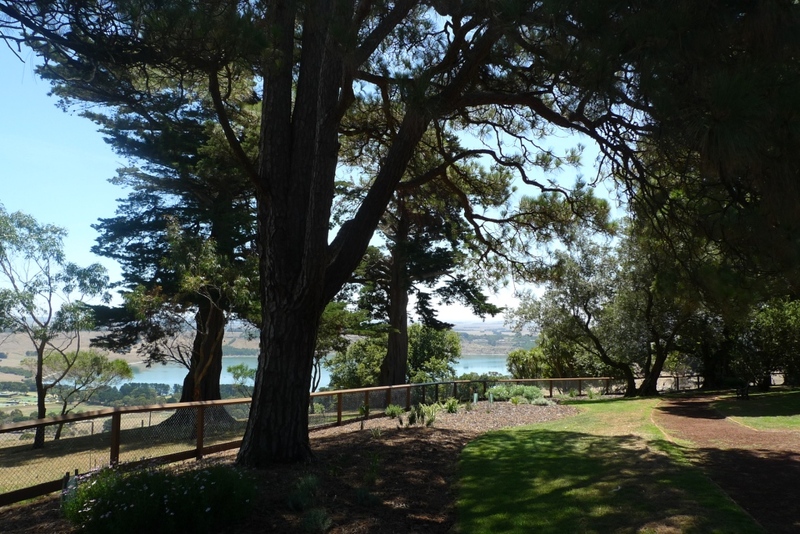 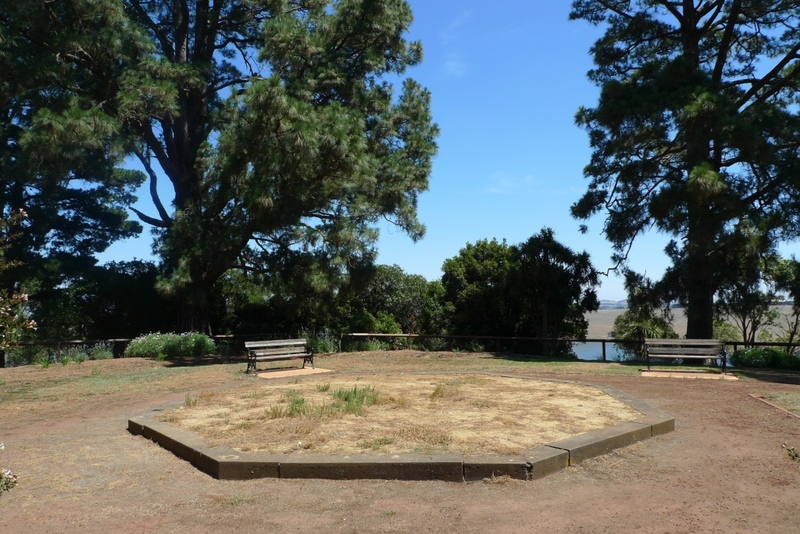 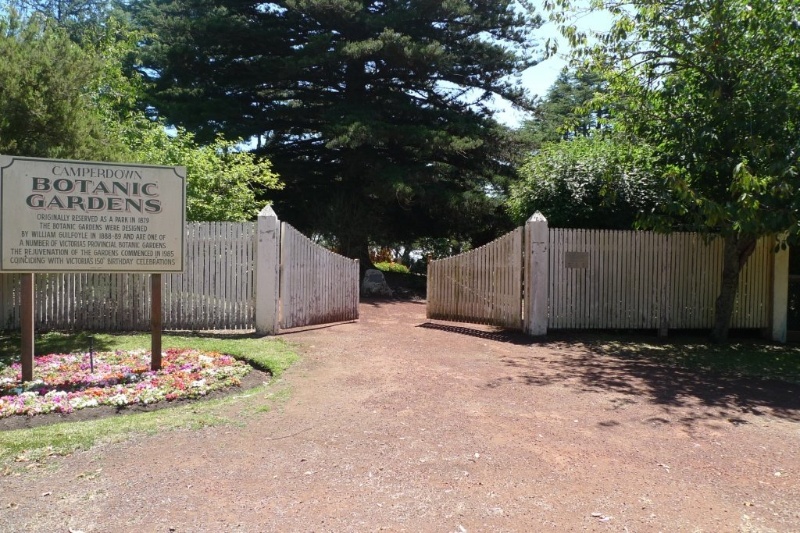 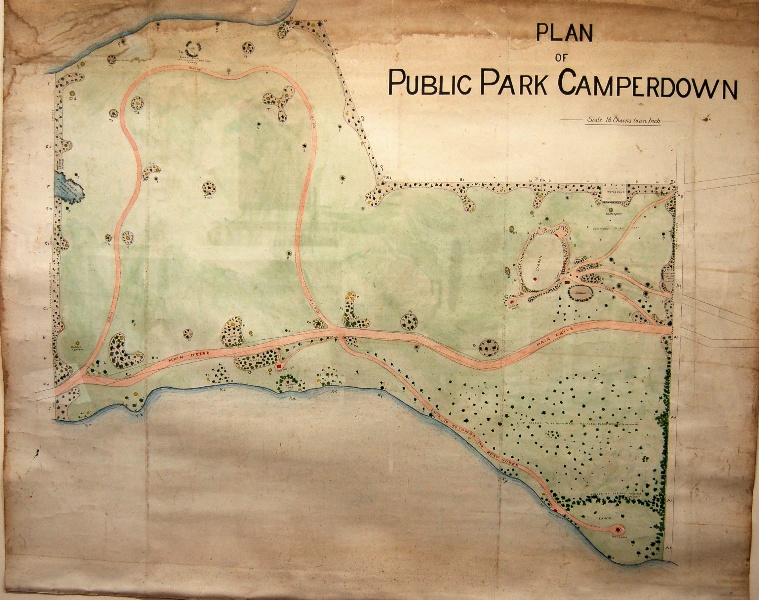 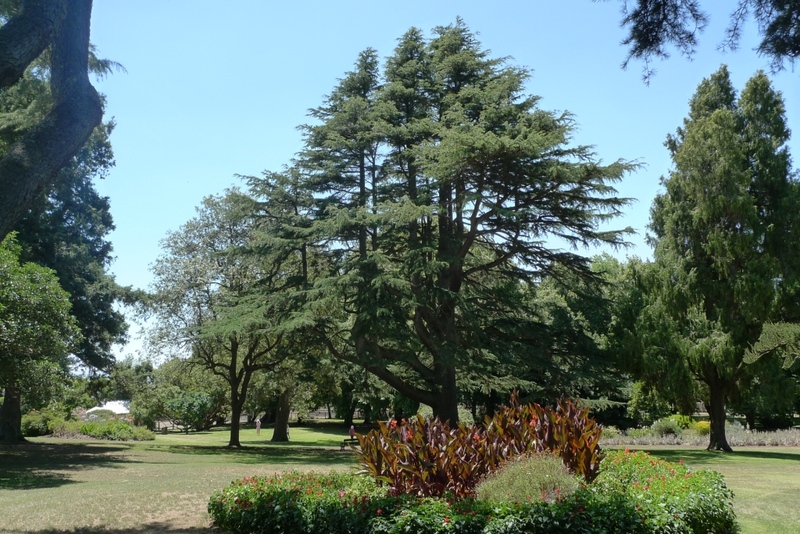 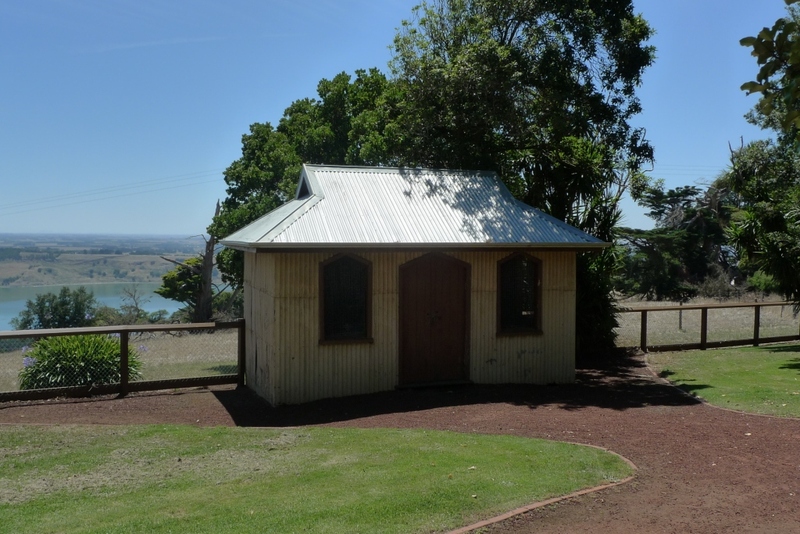 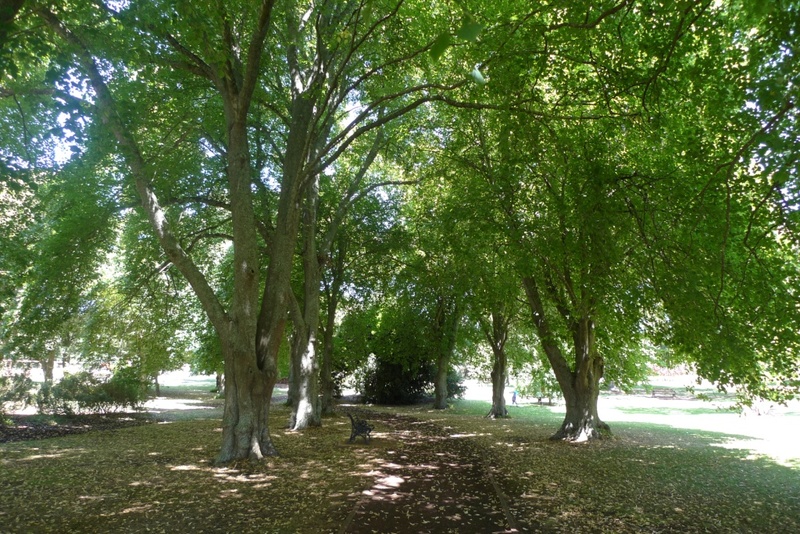 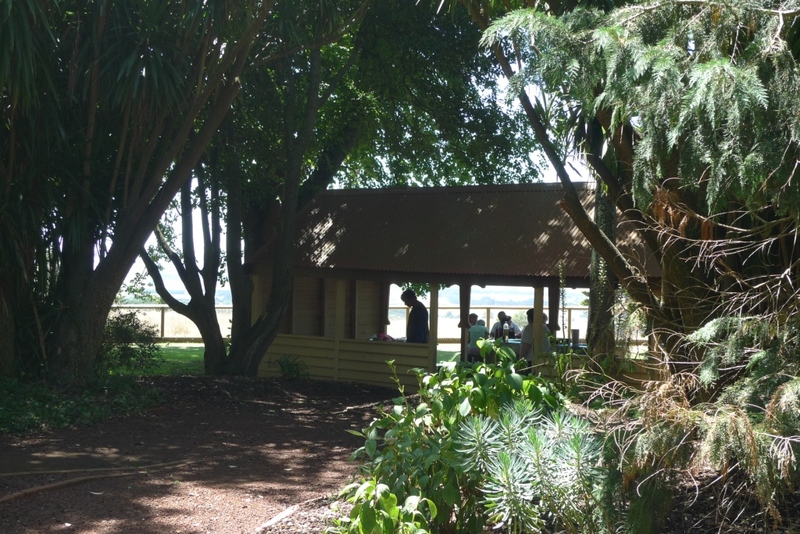 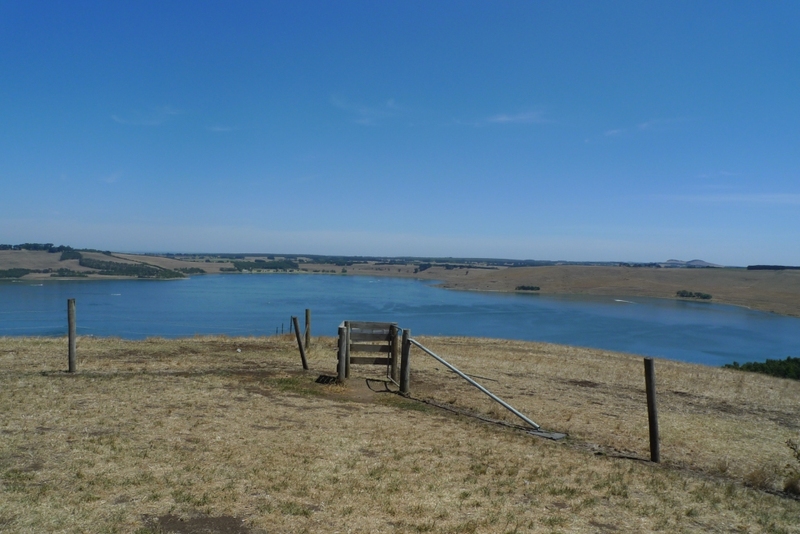 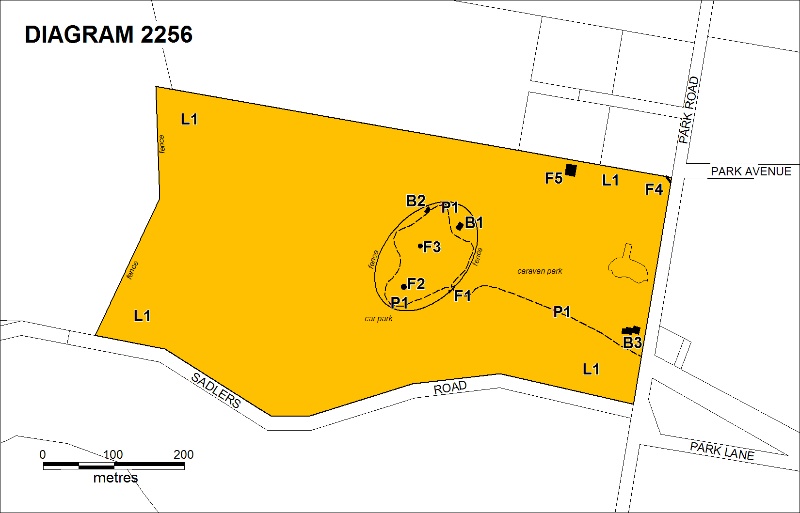 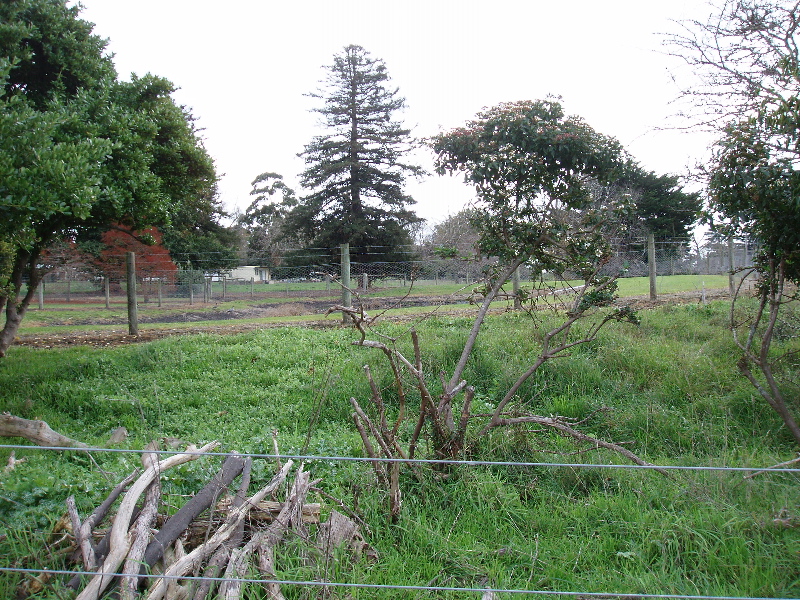 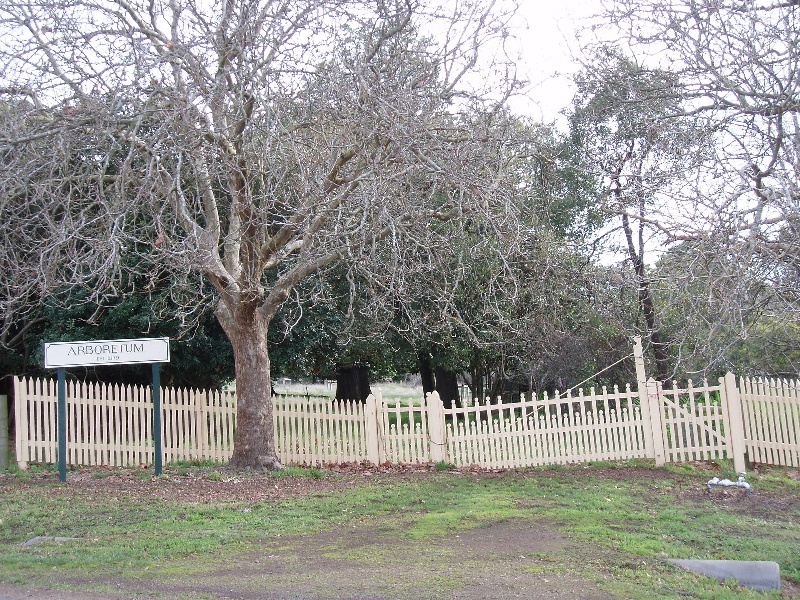 The Camperdown Botanic Gardens and Arboretum are situated high on a hill approximately 6 kilometres west of the township of Camperdown at the end of Park Road with commanding views over the twin volcanic crater lakes of Gnotuk and Bullen Merri.

The 1.2 hectare site of the Botanic Gardens and 6.9 hectare Arboretum are part of the 118 hectare allotment which was initially reserved in July 1869 as the Camperdown Public Park. Access to the Botanic Gardens is through a caravan park, established in 1960, which occupies land within the original Arboretum.

In late 1870 the initial layout of the serpentine plan was undertaken by Daniel Bunce, curator of the Geelong Botanic Gardens from 1858, with a road through the park approved in 1871. Further modifications were instigated by David Harboard, Shire of Hampden engineer including enclosing the site with a picket fence, forming paths and planting out the site. By June 1874, over 300 trees had been planted and a nursery established for raising plant materials for the gardens, with the area around the botanic reserve gradually cleared and grazing allowed. On 28 July 1879 the 292 acre site was permanently reserved by the Board of Land and Survey and by this time the botanic reserve was used regularly as an ornamental and recreational ground.

In November 1877 the Public Park Committee sought designs for an ornamental building resulting in the construction of a picturesque, iron observation rotunda in September 1879, which was removed in 1960. The gate lodge designed by James Daskein, Shire of Hampden engineer, was constructed by Evans and Son in 1880 with a verandah added by Mc Crae and Fullarton in 1887. This is now used as caretaker's office for the caravan park.

From 1888 - 1890 William Guilfoyle, Director of the Melbourne Botanic Gardens, recommended improvements to the amenity and layout of the Camperdown Botanic Gardens which included removal of some inner paths and surplus trees as well as the metalling of the access road. Guilfoyle prepared a further plan and planting list for additional improvements in1910 which both survive. Further improvements were made between 1905-10 including the construction of new entrance gates, picnic shelters, reservoirs and a watering system. Later additions included a fish pond, aviary (c1930) and a glass house which have all been removed.

The Camperdown Botanic Gardens and Arboretum include a number of mature significant trees including a rare example of an avenue of nine Tilia x europaea (Linden), two rare Quercus leucotrichophora (Himalayan Oak) and an endangered Elaeodendron croceum (African Holly). Other important trees in the Arboretum include the Quercus pubescens (Downy Oak), Quercus petraea (Sessile Oak) Acer opalus subsp. obtusatum (Italian Maple) as well as other uncommon species of deciduous trees and conifers that survive from the 1870s plantings. In March 1996 a Pinus montezuma (Montezuma Pine) was planted by James Guilfoyle, grandson of William Guilfoyle.

This site is on the land of the traditional owners.

The Camperdown Botanic Gardens and Arboretum are of historic, aesthetic and scientific (botanical) significance to the state of Victoria.

The Camperdown Botanic Gardens and Arboretum are of historic significance for their association with William Guilfoyle with the gardenesque design being one of the last known examples of his public work before his death in 1912. Guilfoyle is regarded as one of Australia's greatest garden designers and his rare, extant plan and accompanying planting notes of 1910 are held in the collection at the Camperdown Historical Society.

The Camperdown Botanic Gardens and Arboretum are of aesthetic significance as one of the largest public park reserves in Victoria enhanced by the dramatic site location on a hill rising between the picturesque twin volcanic crater lakes of Gnotuk and Bullen Merri. The location provides outstanding views from within the gardens over the lakes and the basalt plains of the western district. The only other hilltop botanic garden is at Daylesford, while Ballarat Botanic Gardens and Colac Botanic Gardens sit beside large lakes.

The Camperdown Botanic Gardens and Arboretum are of scientific (botanical) significance as the mature gardens include two rare specimens of Quercus leucotrichophora (Himalayan Oak), an Elaeodendron croceum (African Holly) which is an endangered species and an avenue of nine Lindens (Tilia x europaea) which is the only known occurrence of the species used in this way. Other important trees in the Arboretum include the Quercus pubescens (Downy Oak), Quercus petraea (Sessile Oak), Acer opalus subsp. obtusatum (Italian Maple) as well as other uncommon species of deciduous trees and conifers which survive from the 1870s plantings.