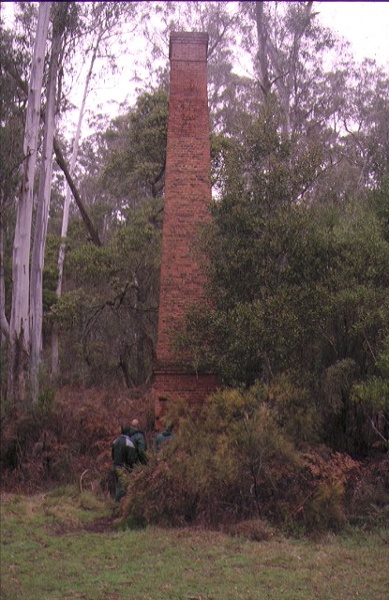 The Howqua United Gold Treatment Works consists of the remains of pyritic roasting furnace with an intact brick chimney stack. Near the roasting furnace is a battery site which was powered by a waterwheel (which, at 63ft diameter, was reputedly the third-largest ever to operate in Victoria. A 1.0km long inclined tramway connects the battery site to the mine workings (a small glory hole or open stope.

The Howqua United Gold Treatment Works is of historical, scientific and archaeological importance to the State of Victoria.

The Howqua United Gold Treatment Works is historically and scientifically important as a characteristic and well preserved example of an important form of gold mining. When the greater part of the gold in some ores is contained in its pyritical contents, the gold is very difficult to extract. From the nineteenth century miners experimented with various metallurgical (or heat treatment) processes to unlock gold from heavily mineralised ore. Evidence of these metallurgical processes, such as the one carried out by the Howqua United Company during the late 1890s, are extremely rare in the State of Victoria.

The Howqua United Gold Treatment Works is archaeologically important for its potential to yield artefacts and evidence which will be able to provide significant information about the technological history of gold mining.