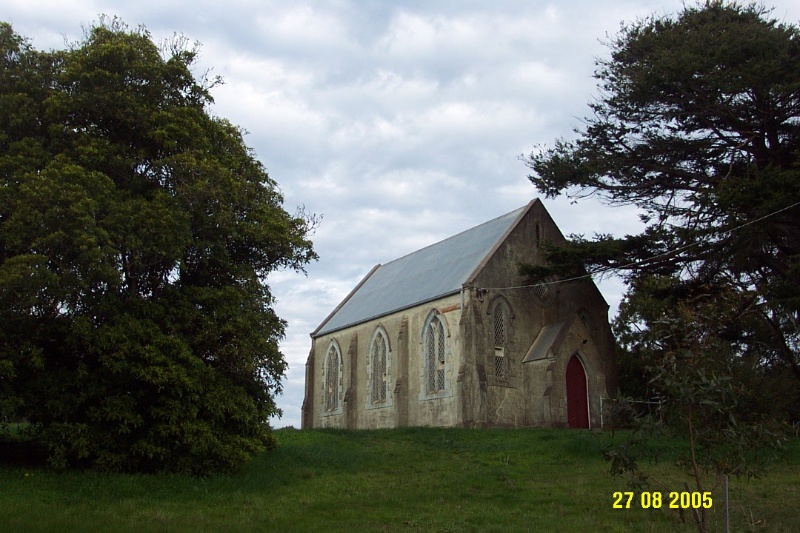 What is Significant?
St Andrew's Presbyterian Church is located on the south east corner of Hare and Levy Streets, Merino, overlooking the township of Merino. The church is a simple primarily symmetrical building with a small porch attached to the facade, and a small timber vestry added at the rear in the later twentieth century. Constructed of local bricks, with a simple white/grey render, the church was built in 1868 by builders Messers. Northcott and Diwell, who also built the Merino Free Library and Mechanic's Institute. The roof is a steeply pitched gable clad with short sheets of corrugated iron. Three impressive dipartite windows decorate the east and west elevations of the church. Merino township and district had many Scottish emigrants take up allotments and early pastoral leases. From as early as 1842, Presbyterian services were held in private homes and at the 'Farmer's Arms' Inn at Merino until the church was built. In 1861, some of the most influential landowners in the district formed a charge for the area, resulting in churches being built at Merino, Digby, Casterton and Coleraine. The Scot's Presbyterian Church opened in August 1869. The church is generally in very good condition, although there is some evidence of movement beneath the windows. No architect has been proven to be associated with the church but it was possibly James Fox of Hamilton, who designed several other local Presbyterian churches in a similar style.

How is it significant?
St. Andrew's Presbyterian Church is of architectural, historical and social significance to the Glenelg Shire.

Why is it Significant?
St Andrew's Presbyterian Church is of architectural significance for its distinctly Gothic style and use of local materials, particularly locally made bricks from the clay creek beds to the south of the township of Merino. Of further significance are sophisticated bipartite gothic diaper windows, which are unusually ornate for a Presbyterian church of this period.

The church has historical significance for its early associations with important Scottish emigrants who became extremely successful pastoralists and members of the congregation. Donations of money, time and gifts are reflected in the grandeurs of the fittings of the small church interior and its windows. Historically, its location is also significant, being located highest on the hill overlooking the town of Merino. St. Andrew's Presbyterian Church is of social significance for its continuous use as a place of worship in the township of Merino for over 130 years.