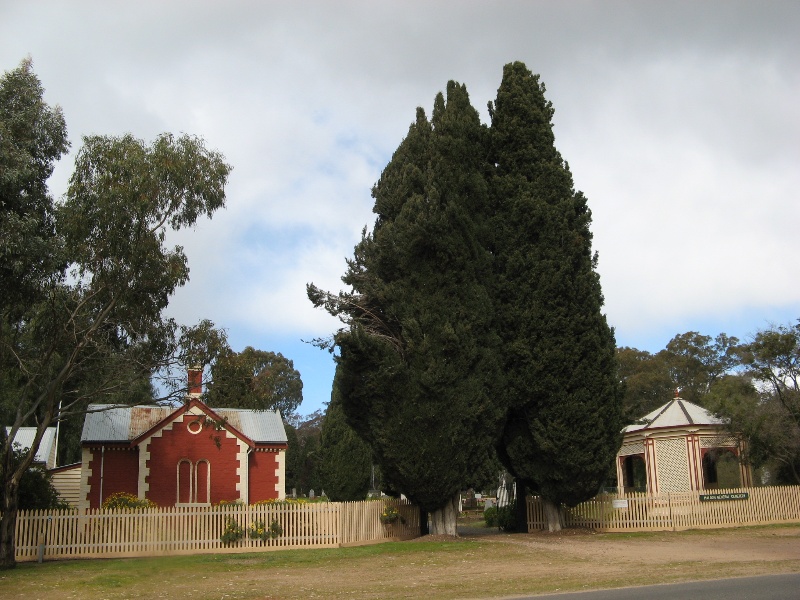 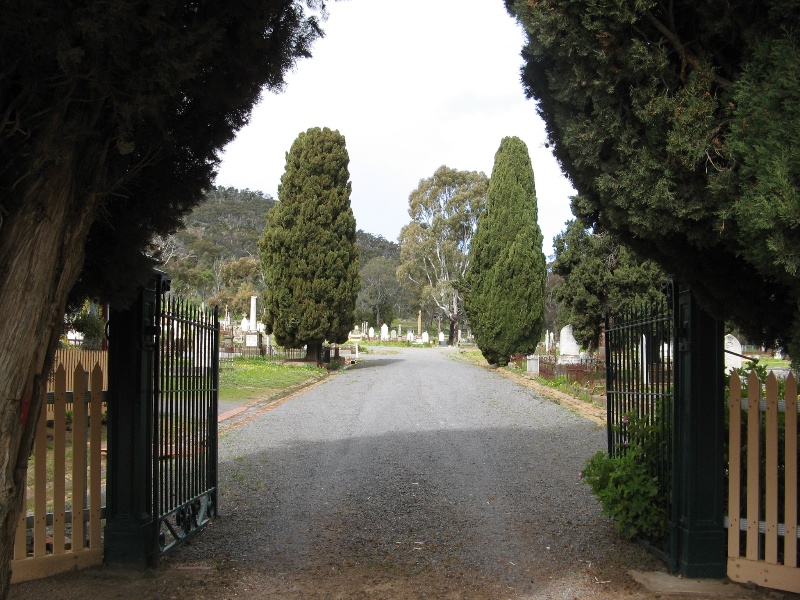 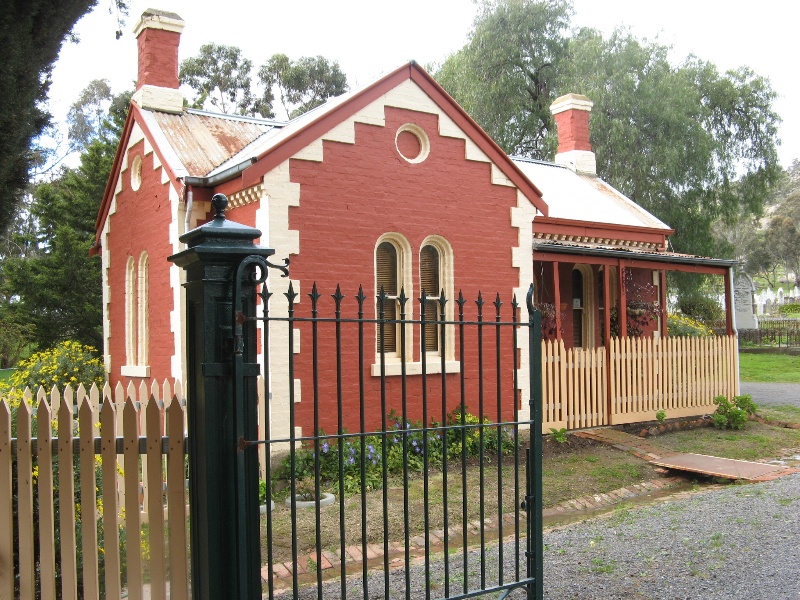 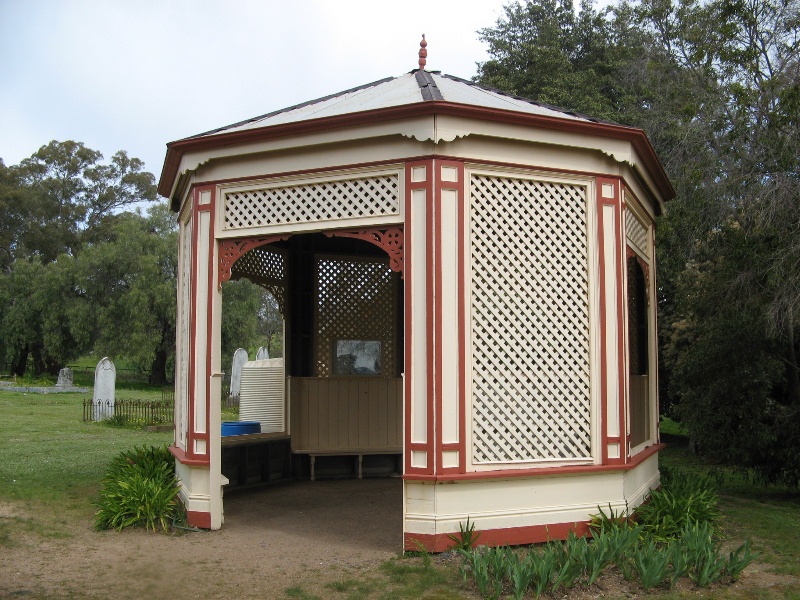 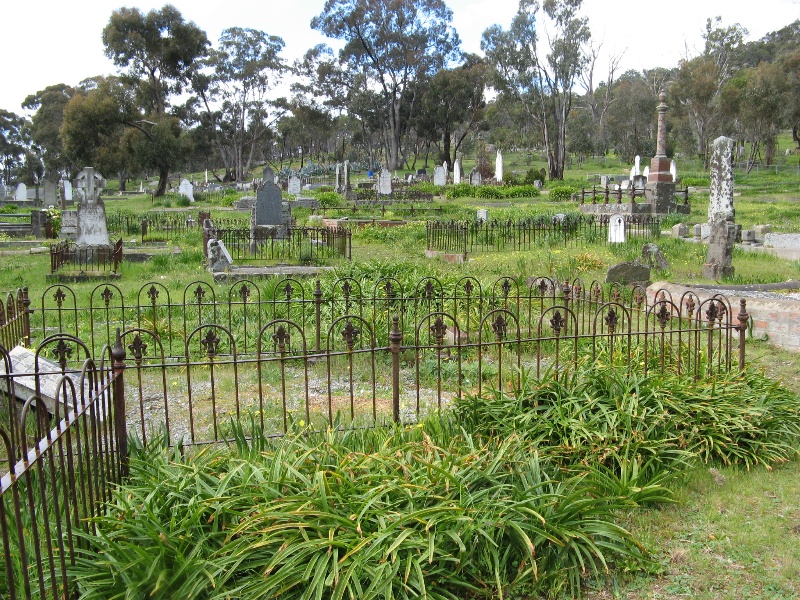 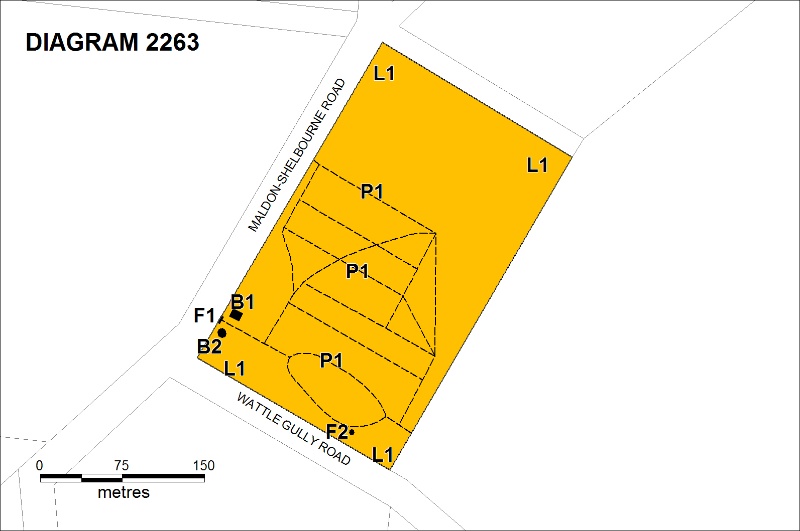 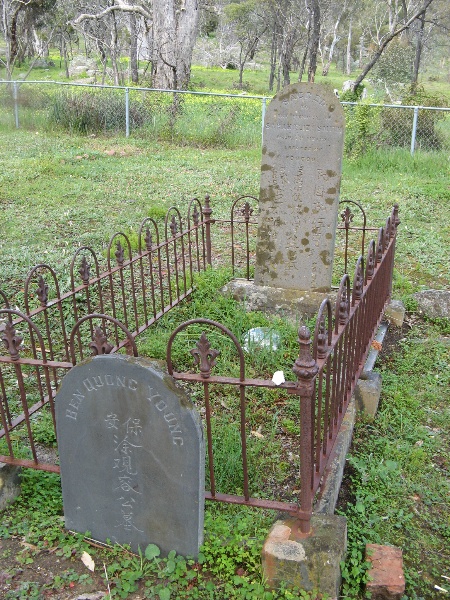 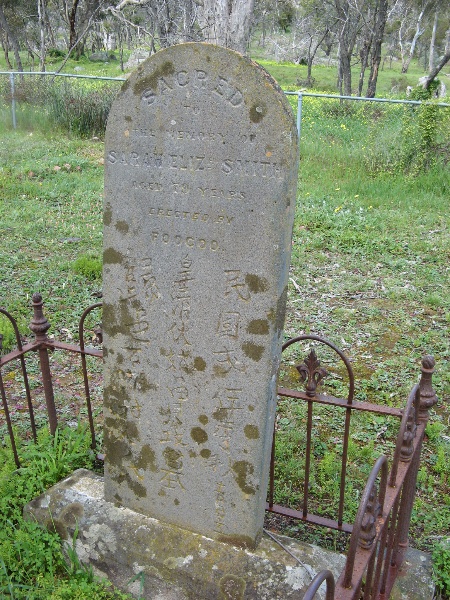 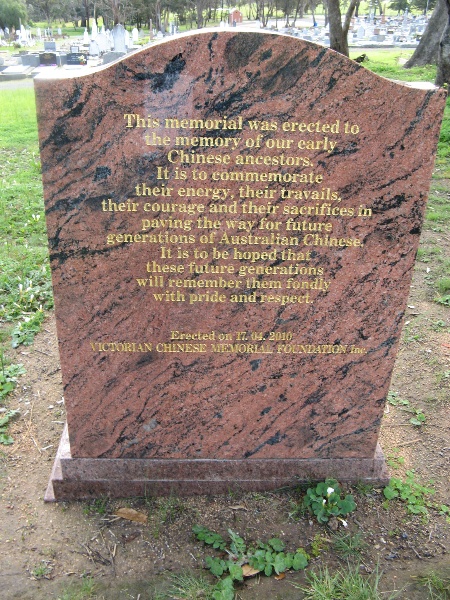 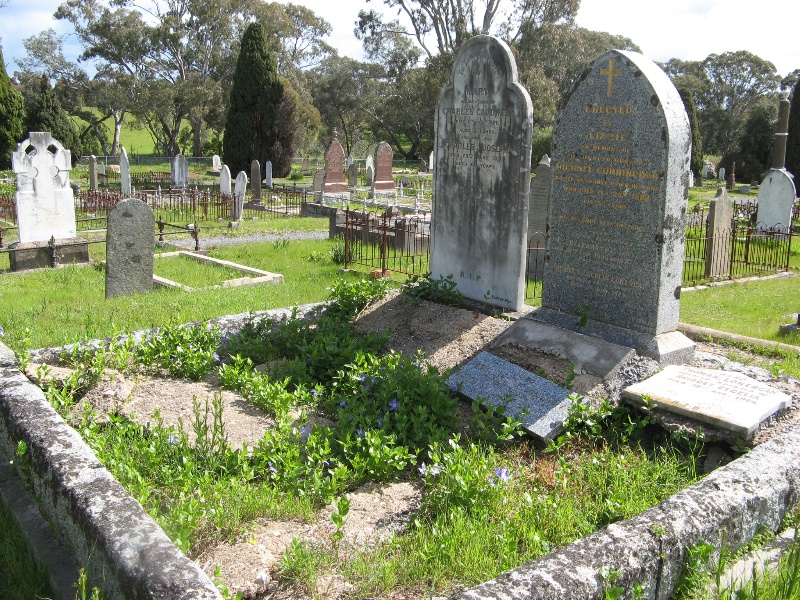 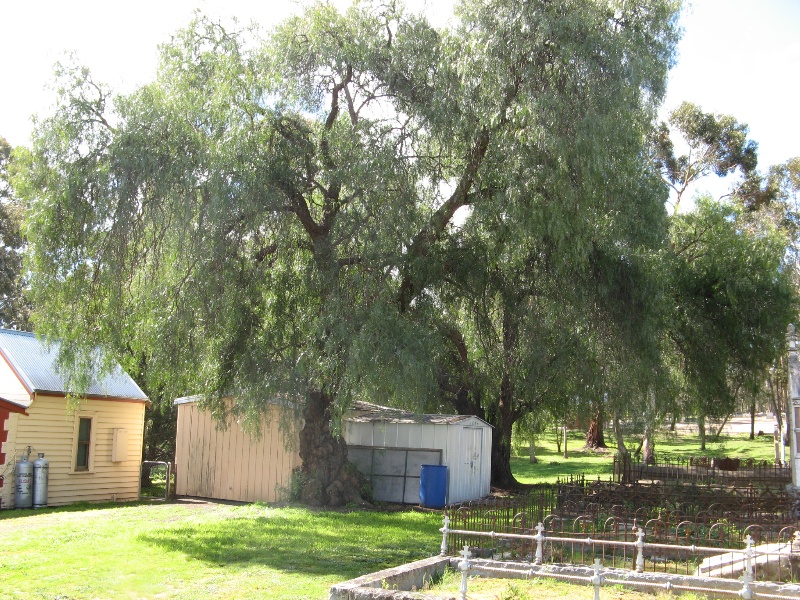 The Maldon Cemetery was reserved in 1861 and the 6.9 ha (16 acres) grant was gazetted in 1878. The first burials in the town of Maldon, established following the discovery of gold at the nearby Tarrangower diggings in 1853, were near the Methodist Chapel, but after 1861 the remains were transferred to the new cemetery. The cemetery was laid out to a design by William Fella Smith, the acting Shire Secretary and one of the Trustees of the Maldon Cemetery Trust, who was commissioned to design a garden setting with drives, pathways and a rest area. The present layout is the same as that shown on a surviving early plan drawn by W. H. Waller in 1872 (held by the Cemetery Trust). The cemetery is unusual for its lack of division by religious denomination. The old section of the cemetery includes a number of Chinese burials and mining memorials, and has a brick Chinese funerary tower dating from about 1865. The cemetery entrance, which lies between two large cypress trees, is flanked by a sexton's lodge built in 1866 and an octagonal rotunda, thought to have been built in about 1900. The brick gutters lining the paths were begun in about 1866. There have been over eight thousand burials in the cemetery including 121 Chinese, and some of the monuments were designed by the well-known Bendigo architectural firm W. Beebe & Son.

The Maldon Cemetery reserve is about 3.2 kms north of the township of Maldon in a spectacular setting at the base of Mt Nuggetty. Only about two-thirds of the rectangular reserve is used for burials, while the northern portion is still heavily timbered with Eucalyptus microcarpa (Grey Box) and is unfenced. The original layout is intact, with a large, slightly skewed central oval linked to the main entrance by a straight drive. The section to the north has a wide drive which sweeps off the straight drive and curves around to the north and back along the contour of the hillside. A series of straight paths then intersect the curved main drive. The paths, whose original granitic sand toppings have been replaced with crushed bluestone, are lined with brick gutters and granite culverts. Important features of the cemetery are the collection of buildings and structures, the Italian cypresses and the ornamental plantings. A rare Carpentaria californica shrub once near the entrance has died and been removed.

The Maldon Cemetery is of historical, architectural, aesthetic and scientific (botanical) significance to the State of Victoria.

The Maldon Cemetery, established in 1861, is of historical significance as a substantially intact example of a mid-nineteenth century goldfields cemetery, which is still in use. The cemetery has strong associations with the early history of Maldon and with the Chinese who migrated there during the gold rush era. The Chinese funerary tower is a tangible reminder of the Chinese religious customs and building traditions practised in the colony, and is a fine example of a rare type. The cemetery is unusual for its lack of separate denominational compartments, the normal arrangement in nineteenth century cemeteries. The various features of the cemetery, the buildings, structures, graves and memorials, are important for the information they provide about burial customs and patterns of death in Victoria.

Maldon Cemetery is architecturally significant for its sexton's cottage, an uncommon building type, and for the decorative rotunda.

Maldon Cemetery has aesthetic significance for its unusual and intact layout, with an irregular arrangement of straight and curved paths, and for its spectacular setting. The cemetery memorials, tombstones and other funerary art are collectively important for their design characteristics and craftsmanship. The cemetery is significant for its impressive collection of bulbs and extensive ground covers, which form an outstanding display in the spring, and its shrubs and trees, notably the specimens of Italian Cypress. The vistas and views of these features both within the cemetery and against the granite and bush backdrop of Mt Nuggetty distinguish the spectacular setting of this precinct.