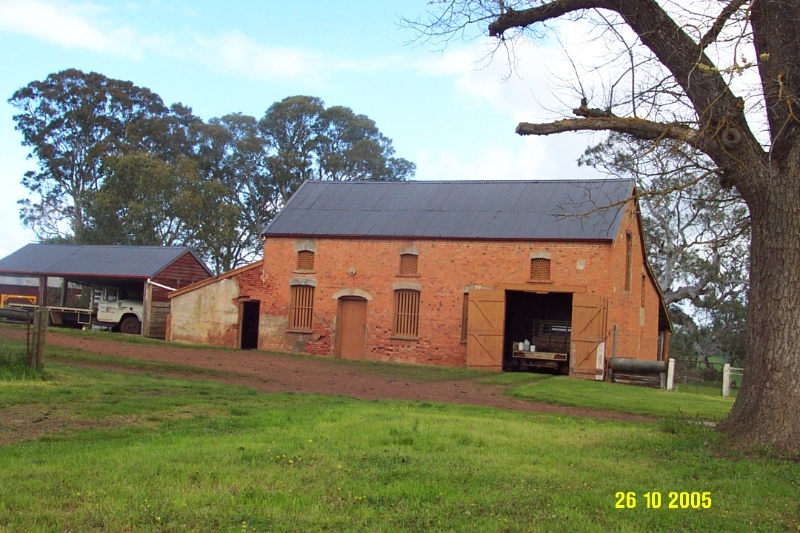 What is Significant?
The Merino Downs squatting run, along with Muntham and Sandford, was one of the first three established in the Port Phillip district of New South Wales following the encounter between the explorer, Major Thomas Mitchell, Surveyor General of NSW and the Henty family who were occupying land at what would become Portland. The Hentys proceeded as quickly as possible northwards to occupy the excellent grazing country described by Mitchell as 'Australia Felix': Edward H Sandford (but only until 1847), and Francis Henty (1815-1889), the youngest, at . The brothers also squatted in the Cape Bridgewater area to the west of Portland and had farming, ship-building, and sealing and whaling interests at the Convincing Grounds to the west. Over many years the various brothers came to occupy many other important squatting runs in the Western District of the colony of Victoria after separation from NSW in 1851. Merino Downs and Muntham remained the most important and Merino Downs is the only one still occupied by the family.

Merino Downs Homestead Complex is located on Henty Creek, approximately 80kms north of Portland and 12.5kms south-east of Casterton on the east side of the Portland Casterton Road, Henty. The complex comprises: the new entrance and tree-lined drive; the former homestead site with its extensive garden and mature exotic plantings; the coach house, stables and blacksmith's shop; the woolshed, and the overseer's cottage, as well as the new homestead, various outbuildings and other structures. Other works, specifically for irrigation, are said to survive on the west side of the Portland Casterton Road.

John Henty was put in charge of Merino Downs at first but, because of his mismanagement, was moved to Sandford and Francis soon took over. He was a generous friend and master who adopted a simple lifestyle and was devoted to his property. His small book, 'History of the First Merino Sheep Imported into Australia', told of his family's pioneering role in the development of the Victorian sheep industry. As early as 1837, Francis brought a number of fine-woolled pedigree sheep from the Henty flock in England to the Portland district. The homestead block was granted to Francis Henty in 1848. This land was linked to Francis Henty's 640 acre Pre-Emptive Right property on the opposite side of Henty Creek, secured in 1856. Francis married Mary Ann Lawrence (1819-1881), daughter of William Lawrence of Tasmania. They had four children, one son, Lawrence Shum (1845-1877), and three daughters, Louisa (1847-1924), Caroline ( 1849-1914) and Alice (1852-1932). Lawrence who was born at Merino Downs, died there and is buried in the Merino Cemetery. Francis Henty ran the Merino Downs property until his death in 1889 when there was a major subdivision of the estate. Then his daughter, Louisa Henty, ran it until her own death in 1924 when it still comprised nearly 5,000 acres. The new drive dates from about this time.

The original timber homestead was begun in 1843, replacing a sod hut and possibly triggered by Francis' marriage to Mary Ann. Presumably there was some sort of subsistence garden begun about the same time. The house was altered and extended over the years along with the increasingly formal garden. Merino Downs, during the occupation of Francis and Mary Ann Henty was renowned for its hospitality. The homestead was demolished in the 1940s and replaced by a new house beyond the original garden's perimeter. The slab woolshed which incorporates much 'bush timber' carpentry must also substantially pre-date the early 1850s, being re-roofed with corrugated iron about 1854. It has been altered and extended but remains a working shed complete with yards and shade trees with a high degree of integrity and in good condition. The stables and coach house probably dates from the 1860s. Substantially intact although badly affected by rising damp, it can be compared directly with buildings at Muntham and Murndal. There are important individual remnant and exotic trees about the complex, perhaps the most important being the remnant Eucalyptus camaldulensis and exotic Populus nigra beside the woolshed. As well as the former homestead site, there are many other sites of substantial archaeological potential within the property.

How is it Significant?
The Merino Downs Homestead Complex is of historical, social and architectural significance to the State of Victoria.

Why is it Significant?
The Merino Downs Homestead Complex is of historical significance for its associations from the late 1830s with the Henty family, pastoral pioneers of the Port Phillip district. Along with their runs Muntham and Sandford (now razed), it was the spearhead of their advance into Major Mitchell's 'Australia Felix'. The Hentys played a major role in the early development of Victoria's sheep and wool industries, as well as early European settlement in the Western District. The site of the Merino Downs complex of farm buildings has particular historical significance as a portion of 60 acres of land on the west side of Henty Creek, and on the south side of the Wannon River, granted to Francis Henty in 1848. This land was linked to Francis Henty's 640 acre Pre-Emptive Right property on the opposite side of Henty Creek, secured in 1856.

The Merino Downs Complex is of social significance for demonstrating the highly respected position in society held by the Henty family. Francis Henty, who ran the Merino Downs property from the 1840s until his death in 1889, and his daughter, Louisa Henty, who owned the property from that time until her own death in 1924, were prominent and popular district residents. Descendants of the Henty family have retained an interest in the property, and it is the only remaining one of the original three properties.

The surviving nineteenth century elements of the Complex are of architectural significance. Although the original homestead no longer survives, its garden does and the whole of that section of the Complex has a high archaeological potential. The woolshed, which adopts a traditional vernacular form and plan, includes the original section which almost certainly dates from the earliest period. It also demonstrates through its sequence of development a continuous use from the earliest period of wool production to the present day. It is directly comparable to many of the earliest woolsheds in the Western District. The brick coach house, stables and blacksmith's shop are also traditional in their form and plan and can be compared with the brick barn at Muntham, another Henty property, and the coach house and stables at Murndal.