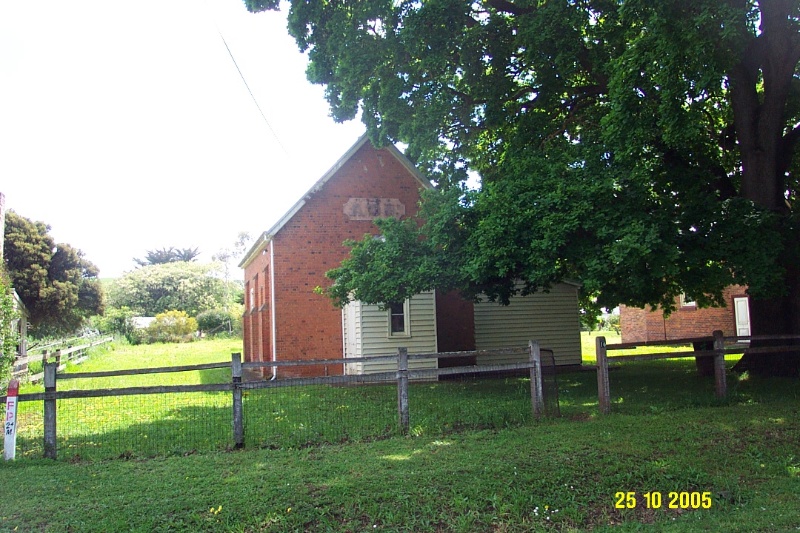 What is Significant?
The Foresters Hall, located at 16 Burke Road in Sandford was originally built as a Rechabite Hall in 1874. The hall sites adjacent to a Mechanics Institute, built in the late 1880s. Both buildings are located on land reserved for the Mechanics Institute in 1888. The Mechanics Institute and the Forester's Hall are divided by a simple post and wire fence which surrounds each building, breaking the original reserve in two. The hall is a simple single storey red brick building, rectangular in plan. The walls, which are set on a rough stone plinth, are red brick laid in alternating header and stretcher bond on all sides. The south wall has three fine stepped buttresses with windows in the two central bays. The facade has a cement render plaque at the centre of the gable with the letters "A.O.F." still slightly discernable. There is a weatherboard entrance porch at the front centre of the hall with a single rectangular window of two panes and a door on the south side. At the rear there is a rectangular brick section with a gabled roof and a double hung sash window. The rear walls of the hall and this section have been rendered. There is a weatherboard addition with a skillion corrugated iron roof on the north side of the hall. The interiors of the building are simple, with a timber stage at one end, and local hardwood floors.

William Layley, a local shoemaker laid the foundation stone of the Rechabite Hall. John Stewart Anderson, a local saddler planted the Oak tree (Quercus robur) in front of the hall to commemorate the 50th Jubilee of the late Queen Victoria. This tree is dealt with in a separate datasheet as a separate heritage place. Anderson was also a member of the Board of Advice for the South Riding to the Shire of Glenelg, the Sandford Common Committee, the Rifle Club, the Sandford Cemetery Trust, and a foundation member of the Ancient Order of Foresters. He established 'penny readings' and the money raised formed the nucleus of the library later housed in the reading room at the rear of the Mechanics Hall. As secretary of the Institute he called for tenders and James McCormack was the successful tenderer. The building remains in very good condition and retains an excellent degree of integrity.

How is it Significant?
The Foresters Hall is of historical, social and architectural significance to the Glenelg Shire.