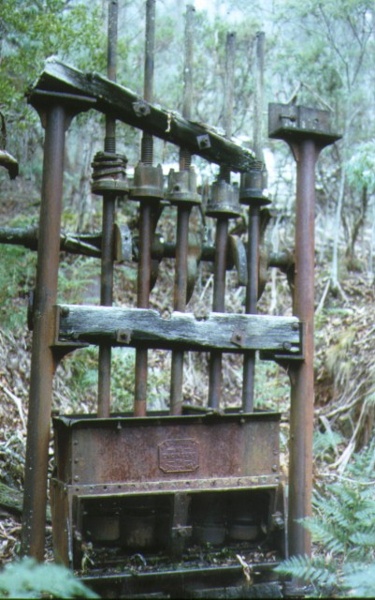 The Pioneer Battery Site consists of the remains of one 5-head stamping battery, hut site, cyanide works and mine workings. The Pioneer lease on the Bonang River was noted as early as 1898 and in the early years of the 20th century, the Bonanza, South Bonanza, and Rising Sun mines were also worked in the vicinity with fair success. In 1904, the Bonanza mine (owned by an English company) was said to have a 'good treatment mill'. The manufacturer's mark on the Pioneer Battery, 'P.N. Russell & Co Sydney Engineers 1868', bears out the historically strong connection between the Bendoc-Bonang goldfield and Sydney, rather than Melbourne. Its early date (pre-dating this goldfield) suggests that the battery had previously been in use elsewhere-probably in NSW, possibly Kiandra-Cooma, or even at the nearby Rising Sun mine, where NSW owners installed steam plant as early as 1871. Although being very close to Delegate River, the machinery has not been significantly scavenged.

The Pioneer Battery Site is of historical, archaeological and scientific importance to the State of Victoria.

Gold mining sites are of crucial importance for the pivotal role they have played since 1851 in the development of Victoria. As well as being a significant producer of Victoria's nineteenth century wealth, with its intensive use of machinery, played an important role in the development of Victorian manufacturing industry. The abandoned mining machinery at the Pioneer battery site is historically important for its evocation of the adventurousness, hardship, and isolation that was part of mining life in the high country areas of the State.

The Pioneer Battery Site is archaeologically important for its potential to yield artefacts and evidence which will be able to provide significant information about the technological history of gold mining. Its relatively good level of integrity due to lack of scavenging adds to the archaeological significance of the site.