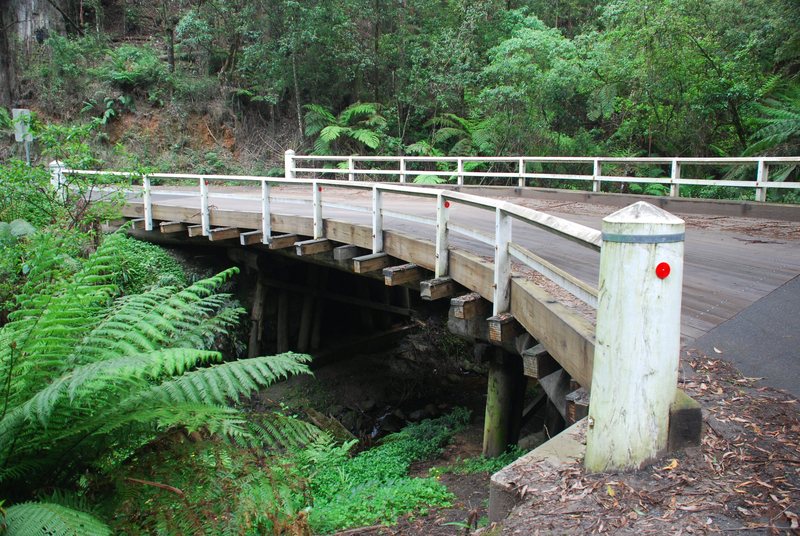 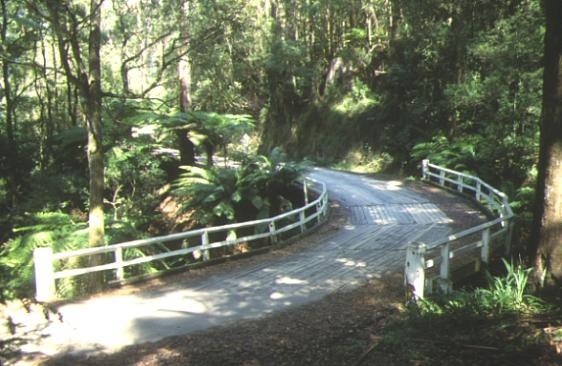 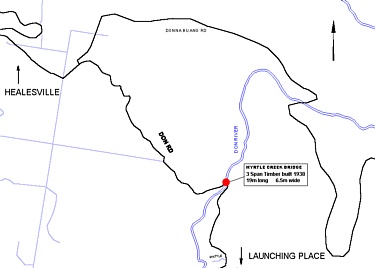 What is significant?
Myrtle Creek Bridge, originally constructed to Country Roads Board approved plans, is a three-span timber-beam road bridge on the Don Road crossing of the Myrtle Creek, 8 kilometres north of Launching Place. It is a standard CRB longitudinal-timber motor-deck type bridge. It has a curved ground-plan and deck, involving two changes of direction in the decking. The present bridge is thought to have been built c1930; it probably replaced an earlier First World War era bridge. The longitudinal timber deck would have been added later, presumably in the years after the Second World War. The bridge is set on a tight curve on a quiet mountain road, at an unusually beautiful creek crossing amidst surroundings of tree ferns and eucalypts. It is currently maintained for motor traffic by VicRoads.

How is it Significant?
Myrtle Creek Bridge is of architectural , historical, and scientific (technical) significance to Victoria.

Why is it Significant?
It is of architectural significance as a compact all-timber road bridge, with a beautifully curving timber deck enhanced by its longitudinal-timber planks. Its design is complementary to its fern gully setting .

It is of historical significance as a good example of an increasingly rare remaining ‘Development Road’ timber bridge. This was an historic epoch in Victoria, wherein a determined fresh effort to open new land for farming, by widespread investment of government loan funds in rural road-and-bridge systems, was achieved through the agency of the newly established Country Roads Board. The County Roads Board members had a particular interest in the fertile well-watered hill country within easy reach of Melbourne, and in the 1920s the main mountainous section of Don Road was officially designated a CRB Developmental Road, with the aim of encouraging development of adjacent forest reserves and rich potential farmland. The present Myrtle Creek Bridge is a relic of this early government Developmental Road scheme.

It is of scientific (technical) significance as a good remaining example of a fast-dwindling standard CRB longitudinal-timber motor deck. This type of deck, developed in Victoria by the CRB in 1931, dramatically improved durability and maintenance, making timber bridge construction economical and viable in an era when reinforced concrete rural bridges were becoming standard. In addition, its curved ground-plan and deck, involving two changes of direction in the decking, is a good example of an extremely rare bridge type in Victoria. The bridge’s neatly curving timber frame is enhanced by its compact three-span design. At 9.3 metres, its main timber-beam span is of notable length for an all-timber longitudinal deck structure (defined as anything over 8.5 metres for this type), and, with the two shorter minor spans at either end, contributes to its distinctive symmetrical form. The modified longitudinal-timber motor deck of the post-1931 pattern clearly distinguishes the Myrtle Creek Bridge from its equally remarkable contemporary, the Bete Bolong Creek Bridge on the Buchan-Orbost Road in East Gippsland.