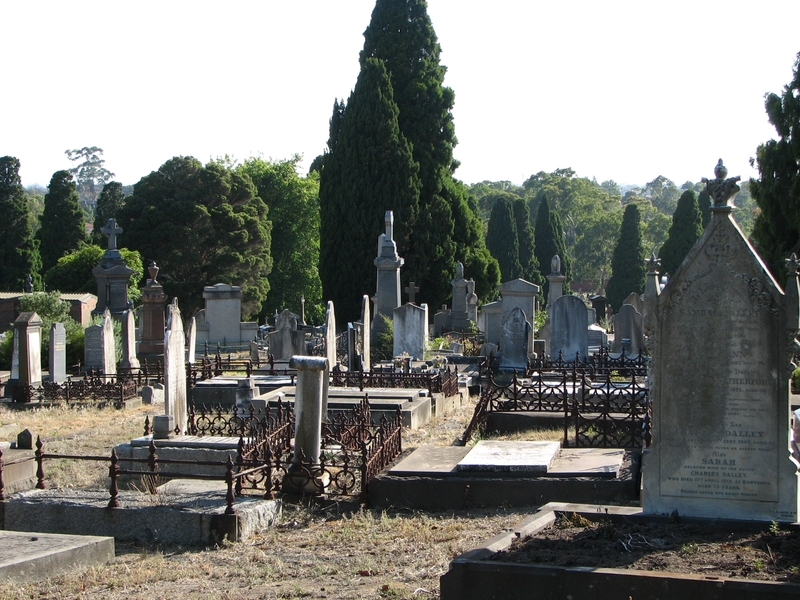 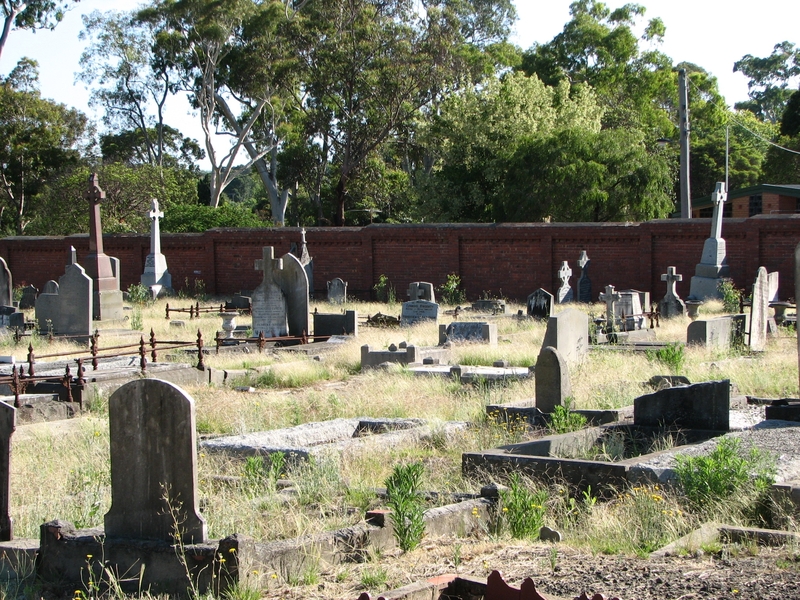 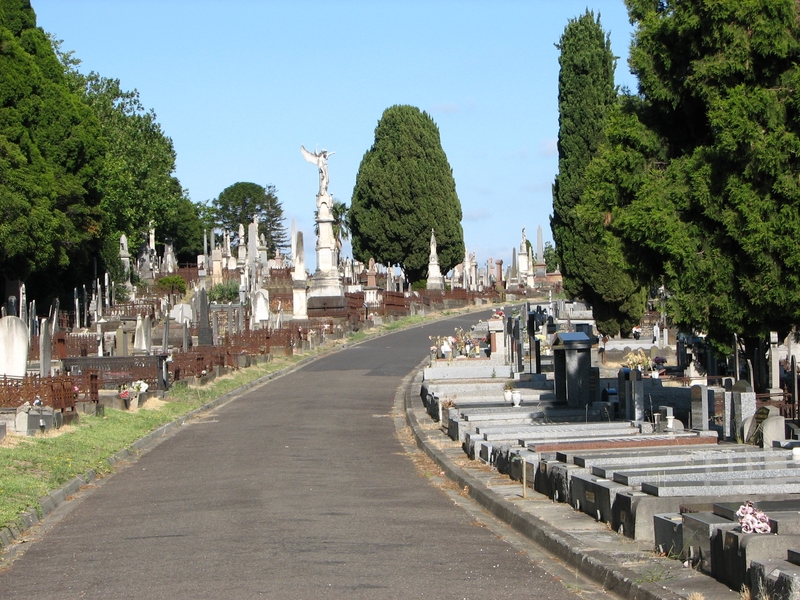 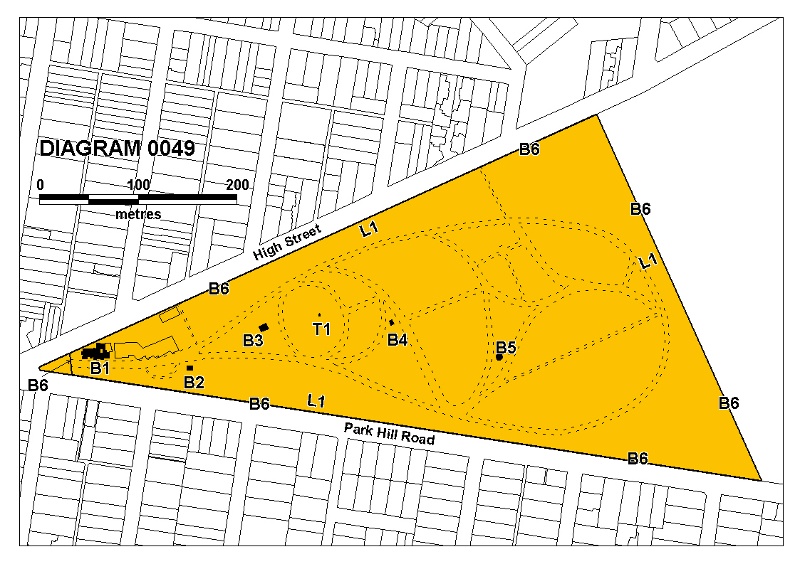 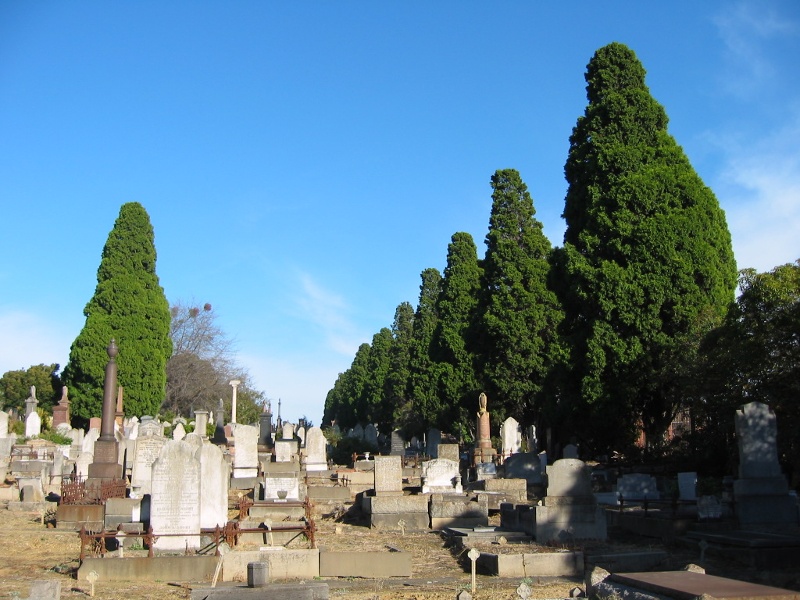 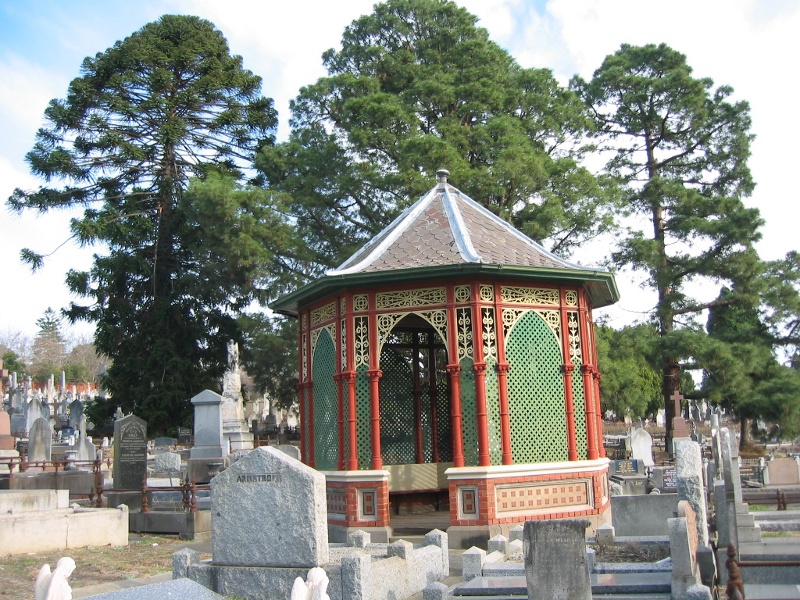 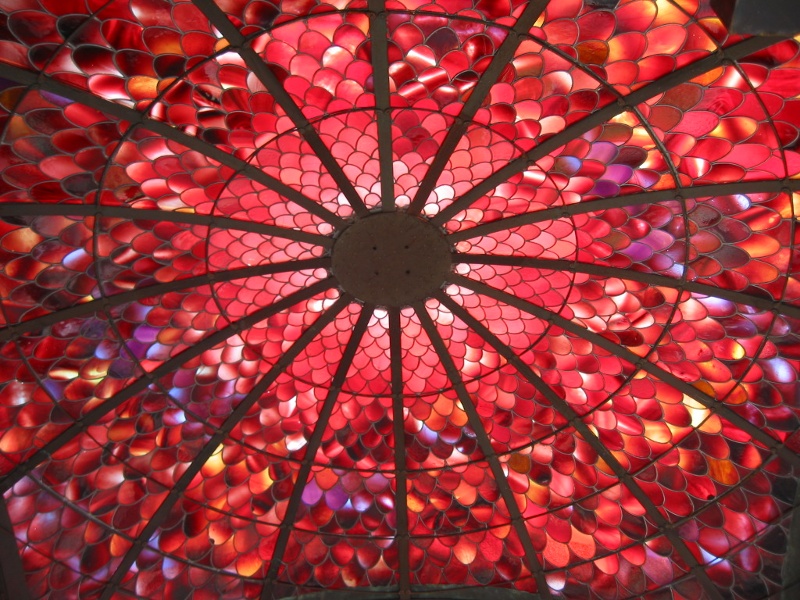 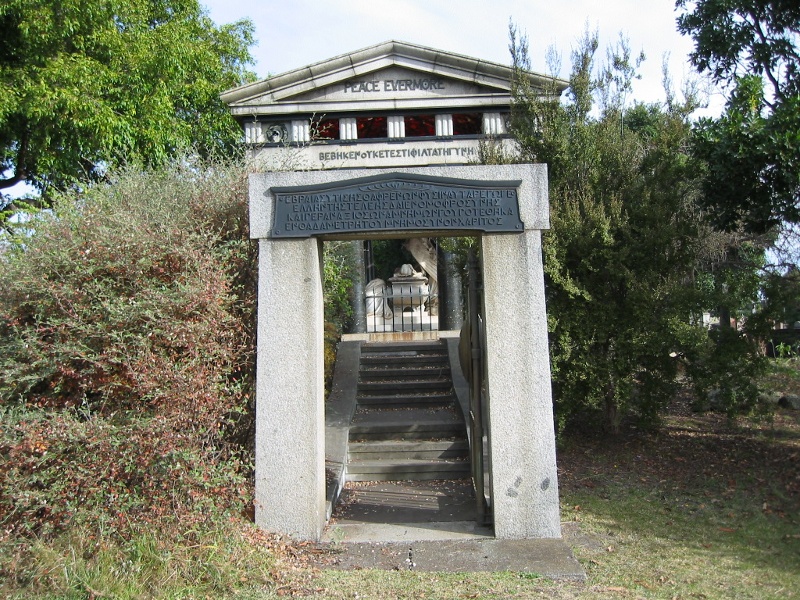 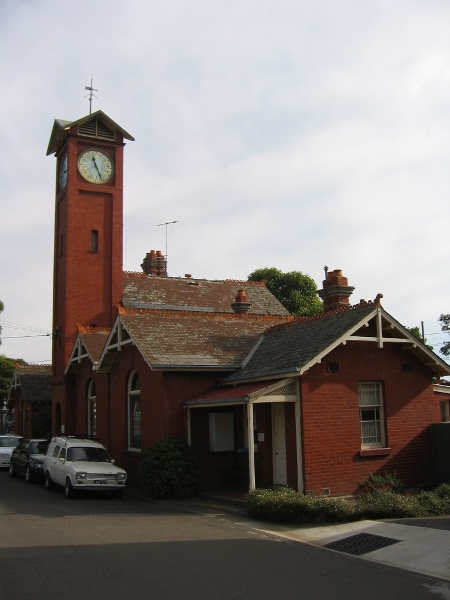 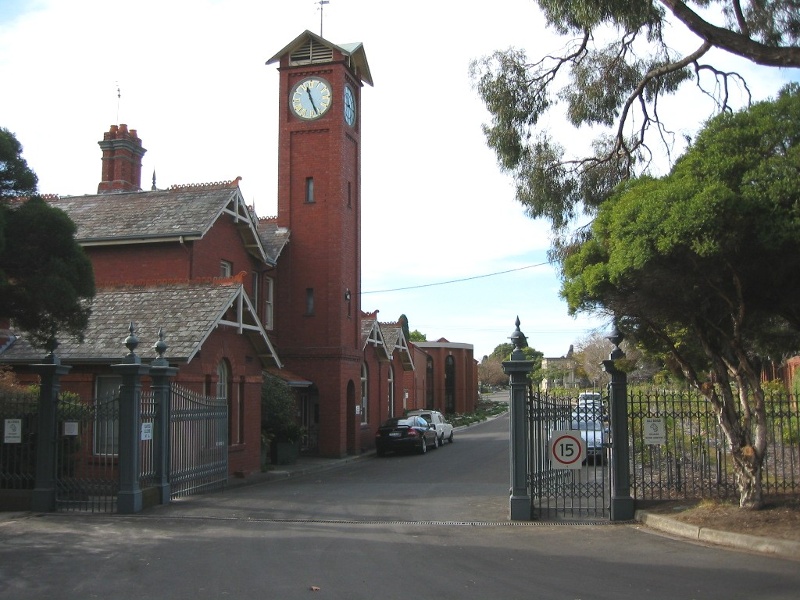 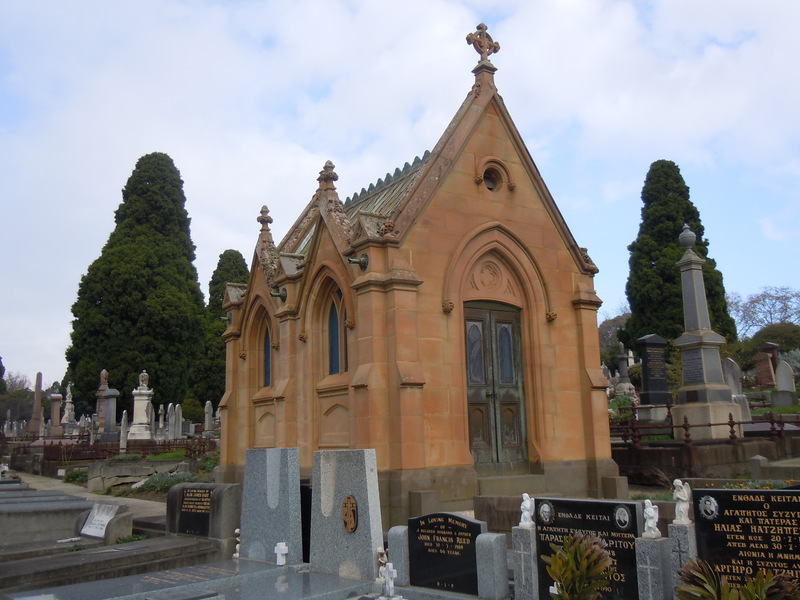 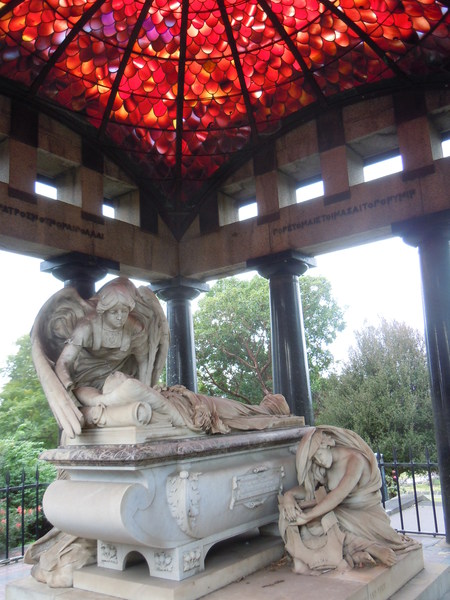 Boroondara Cemetery, established in 1858, is within an unusual triangular reserve bounded by High Street, Park Hill Road and Victoria Park, Kew. The caretaker's lodge and administrative office (1860 designed by Charles Vickers, additions, 1866-1899 by Albert Purchas) form a picturesque two-storey brick structure with a slate roof and clock tower. A rotunda or shelter (1890, Albert Purchas) is located in the centre of the cemetery: this has an octagonal hipped roof with fish scale slates and a decorative brick base with a tessellated floor and timber seating. The cemetery is surrounded by a 2.7 metre high ornamental red brick wall (1895-96, Albert Purchas) with some sections of vertical iron palisades between brick pillars. Albert Purchas was a prominent Melbourne architect who was the Secretary of the Melbourne General Cemetery from 1852 to 1907 and Chairman of the Boroondara Cemetery Board of Trustees from 1867 to 1909. He made a significant contribution to the design of the Boroondara Cemetery

Boroondara Cemetery is an outstanding example of the Victorian Garden Cemetery movement in Victoria, retaining key elements of the style, despite overdevelopment which has obscured some of the paths and driveways. Elements of the style represented at Boroondara include an ornamental boundary fence, a system of curving paths which are kerbed and follow the site's natural contours, defined views, recreational facilities such as the rotunda, a landscaped park like setting, sectarian divisions for burials, impressive monuments, wrought and cast iron grave surrounds and exotic symbolic plantings. In the 1850s cemeteries were located on the periphery of populated areas because of concerns about diseases like cholera. They were designed to be attractive places for mourners and visitors to walk and contemplate. Typically cemeteries were arranged to keep religions separated and this tended to maintain links to places of origin, reflecting a migrant society.

Other developments included cast iron entrance gates, built in 1889 to a design by Albert Purchas; a cemetery shelter or rotunda, built in 1890, which is a replica of one constructed in the Melbourne General Cemetery in the same year; an ornamental brick fence erected in 1896-99(?); the construction and operation of a terminus for a horse tram at the cemetery gates during 1887-1915; and the Springthorpe Memorial built between 1897 and 1907. A brick cremation wall and a memorial rose garden were constructed near the entrance in the mid- twentieth century(c.1955-57) and a mausoleum completed in 2001.The maintenance shed/depot close to High Street was constructed in 1987. The original entrance was altered in 2000 and the original cast iron gates moved to the eastern entrance of the Mausoleum.

The Springthorpe Memorial (VHR 522) set at the entrance to the burial ground commemorates Annie Springthorpe, and was erected between 1897 and 1907 by her husband Dr John Springthorpe. It was the work of the sculptor Bertram Mackennal, architect Harold Desbrowe Annear, landscape designer and Director of the Melbourne Bortanic Gardens, W.R. Guilfoyle, with considerable input from Dr Springthorpe The memorial is in the form of a small temple in a primitive Doric style. It was designed by Harold Desbrowe Annear and includes Bertram Mackennal sculptures in Carrara marble. Twelve columns of deep green granite from Scotland support a Harcourt granite superstructure. The roof by Brooks Robinson is a coloured glass dome, which sits within the rectangular form and behind the pediments. The sculptural group raised on a dais, consists of the deceased woman lying on a sarcophagus with an attending angel and mourner. The figure of Grief crouches at the foot of the bier and an angel places a wreath over Annie's head, symbolising the triumph of immortal life over death. The body of the deceased was placed in a vault below. The bronze work is by Marriots of Melbourne. Professor Tucker of the University of Melbourne composed appropriate inscriptions in English and archaic Greek lettering.. The floor is a geometric mosaic and the glass dome roof is of Tiffany style lead lighting in hues of reds and pinks in a radiating pattern. The memorial originally stood in a landscape triangular garden of about one acre near the entrance to the cemetery. However, after Dr Springthorpe's death in 1933 it was found that transactions for the land had not been fully completed so most of it was regained by the cemetery. A sundial and seat remain. The building is almost completely intact. The only alteration has been the removal of a glass canopy over the statuary and missing chains between posts. The Argus (26 March 1933) considered the memorial to be the most beautiful work of its kind in Australia. No comparable buildings are known.

The Syme Memorial (1908) is a memorial to David Syme, political economist and publisher of the Melbourne Age newspaper. The Egyptian memorial designed by architect Walter Richmond Butler is one of the most finely designed and executed pieces of monumental design in Melbourne. It has a temple like form with each column having a different capital detail. These support a cornice that curves both inwards and outwards. The tomb also has balustradings set between granite piers which create porch spaces leading to the entrance ways. Two variegated Port Jackson Figs are planted at either end.

The Cussen Memorial (VHR 2036) was constructed in 1912-13 by Sir Leo Cussen in memory of his young son Hubert. Sir Leo Finn Bernard Cussen (1859-1933), judge and member of the Victorian Supreme Court in 1906. was buried here. The family memorial is one of the larger and more impressive memorials in the cemetery and is an interesting example of the 1930s Gothic Revival style architecture. It takes the form of a small chapel with carvings, diamond shaped roof tiles and decorated ridge embellishing the exterior.

By the 1890s, the Boroondara Cemetery was a popular destination for visitors and locals admiring the beauty of the grounds and the splendid monuments. The edge of suburban settlement had reached the cemetery in the previous decade. Its Victorian garden design with sweeping curved drives, hill top views and high maintenance made it attractive. In its Victorian Garden Cemetery design, Boroondara was following an international trend. The picturesque Romanticism of the Pere la Chaise garden cemetery established in Paris in 1804 provided a prototype for great metropolitan cemeteries such as Kensal Green (1883) and Highgate (1839) in London and the Glasgow Necropolis (1831). Boroondara Cemetery was important in establishing this trend in Australia.

The cemetery's beauty peaked with the progressive completion of the spectacular Springthorpe Memorial between 1899 and 1907. From about the turn of the century, the trustees encroached on the original design, having repeatedly failed in attempts to gain more land. The wide plantations around road boundaries, grassy verges around clusters of graves in each denomination, and most of the landscaped surround to the Springthorpe memorial are now gone. Some of the original road and path space were resumed for burial purposes. The post war period saw an increased use of the Cemetery by newer migrant groups. The mid- to late- twentieth century monuments were often placed on the grassed edges of the various sections and encroached on the roadways as the cemetery had reached the potential foreseen by its design. These were well tended in comparison with Victorian monuments which have generally been left to fall into a state of neglect.

The Boroondara Cemetery features many plants, mostly conifers and shrubs of funerary symbolism, which line the boundaries, road and pathways, and frame the cemetery monuments or are planted on graves. The major plantings include an impressive row of Bhutan Cypress (Cupressus torulosa), interplanted with Sweet Pittosporum (Pittosporum undulatum), and a few Pittosporum crassifolium, along the High Street and Parkhill Street, where the planting is dominated by Sweet Pittosporum.

Planting within the cemetery includes rows and specimen trees of Bhutan Cypress and Italian Cypress (Cupressus sempervirens), including a row with alternate plantings of both species. The planting includes an unusual "squat" form of an Italian Cypress. More of these trees probably lined the cemetery roads and paths. Also dominating the cemetery landscape near the Rotunda is a stand of 3 Canary Island Pines (Pinus canariensis), a Bunya Bunya Pine (Araucaria bidwillii) and a Weeping Elm (Ulmus glabra 'Camperdownii')

The Cemetery records, including historical plans of the cemetery from 1859, are held by the administration and their retention enhances the historical significance of the Cemetery.

How is it significant?
Boroondara Cemetery is of aesthetic, architectural, scientific (botanical) and historical significance to the State of Victoria.

Why is it significant?
The Boroondara Cemetery is of historical and aesthetic significance as an outstanding example of a Victorian garden cemetery.

The Boroondara Cemetery is of historical significance as a record of Victorian life from the 1850s, and the early settlement of Kew. It is also significant for its ability to demonstrate, through the design and location of the cemetery, attitudes towards burial, health concerns and the importance placed on religion, at the time of its establishment.

The Boroondara Cemetery is of architectural significance for the design of the gatehouse or sexton's lodge and cemetery office (built in stages from 1860 to 1899), the ornamental brick perimeter fence and elegant cemetery shelter to the design of prominent Melbourne architects, Charles Vickers (for the original 1860 cottage) and Albert Purchas, cemetery architect and secretary from 1864 to his death in 1907.

The Boroondara Cemetery has considerable aesthetic significance which is principally derived from its tranquil, picturesque setting; its impressive memorials and monuments; its landmark features such as the prominent clocktower of the sexton's lodge and office, the mature exotic plantings, the decorative brick fence and the entrance gates; its defined views; and its curving paths. The Springthorpe Memorial (VHR 522), the Syme Memorial and the Cussen Memorial (VHR 2036), all contained within the Boroondara Cemetery, are of aesthetic and architectural significance for their creative and artistic achievement.

The Boroondara Cemetery is of scientific (botanical) significance for its collection of rare mature exotic plantings. The Golden Funeral Cypress, (Chamaecyparis funebris 'Aurea') is the only known example in Victoria.

The Boroondara Cemetery is of historical significance for the graves, monuments and epitaphs of a number of individuals whose activities have played a major part in Australia's history. They include the Henty family, artists Louis Buvelot and Charles Nuttall, businessmen John Halfey and publisher David Syme, artist and diarist Georgiana McCrae, actress Nellie Stewart and architect and designer of the Boroondara and Melbourne General Cemeteries, Albert Purchas.