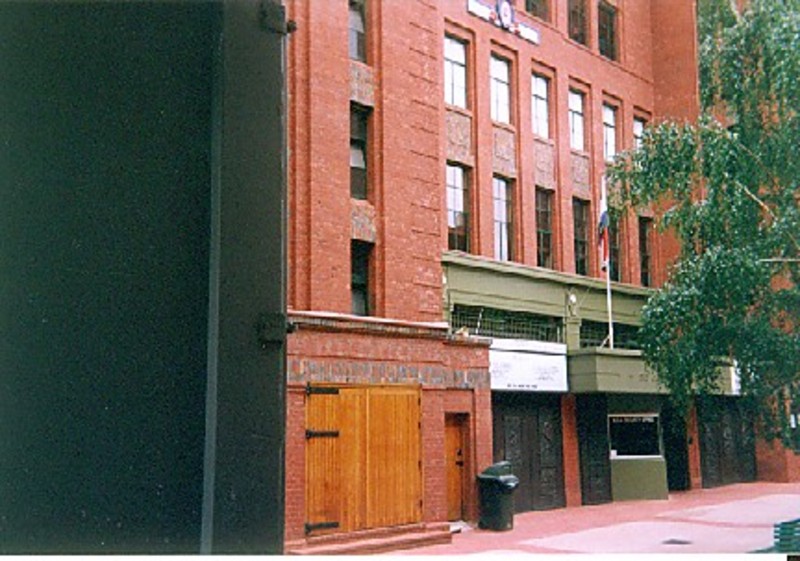 Melbourne Cricket Ground - A colosseum that displays the Melbournian enthusiasm for the two great games which divide the city's year: cricket matches having been played on the site since 1853, and Australian Rules football having its beginnings there in 1858. The present stadium includes buildings dating from 1927 to 1968 and has been the scene of many great occasions including the XIV Olympic Games.
Classified: 19/04/1984
Revised: 03/08/1998
The Member's Pavilion. Statement of Significance. Designed by architects Stephenson and Meldrum, and completed in 1928, the pavilion is significant for social/historical and architectural and technical reasons at the State level.
The Members Pavilion is socially and historically important as the oldest and most distinctive stand in the MCG, Australia's most important sporting arena. As the home of the Melbourne Cricket Club, an early Melbourne institution, the Members Pavilion provides a sense of history and continuity to the ground. It is also a focus for the MCG, which has a unique character as a massive stadium, composed of a number of stands built at different times. The Pavilion has a particular interest as a large historic 'club' building with commensurate facilities and decor, but it is a club which virtually anyone can join, which thousands of Victorians have, some over generations, and many more are on the famous waiting list. The Long Room, with its traditional decor and rules, and leather couches with a view of the ground, has a special ambience. The images of club presidents, great sporting personalities, and other memorabilia lining the walls evokes a sense of tradition and the excitement of past triumphs.
As the oldest stand at the MCG, it has associations with all the important events and personalities involved with the ground since 1928. These include all the celebrated Test Matches and Grand Finals, and sporting heroes of the day. The Pavilion was specifically the site for billeting of American troops in 1942 and Australian troops between 1943 and 1945 during WWII, the Queen's visit in 1954, and the 1956 Olympic Games.
The building is architecturally significant as the 'grandest' grandstand from the interwar period. It is constructed at a large scale with a wide range of facilities provided for the comfort of members, and the seats are covered by the largest roof of the period, where a complex structure has reduced the number of posts to the minimum. The public rooms, particularly the lobby, stair, and long room and adjoining former dining room, despite numerous minor alterations over the years, include architectural elaboration in a traditional, broadly classical style, providing a suitably 'club-like' environment. The facade features strong massing, notably the squat stair towers, and an extent of finely executed decorative brickwork unusual for the period, which provides a distinctive image. This extent of elaboration and image making is itself unusual for a grandstand, which before WWII were more typically executed as a plain rear wall.
There is also some significance for its association with one of the most celebrated architects in Australia, Arthur Stephenson, who revolutionised and dominated hospital design in Australia from the 1930s and was eventually knighted and received the Gold Medal from both the Royal Australian Institute of Architects and the Royal British Institute of Architects.
Classified: 19/04/1984
Revised: 05/03/2001
The pavilion was demolished in 2004.
2006 National Trust Victorian Heritage Icon Award
Show more
Show less
All information on this page is maintained by National Trust. Click below for their website and contact details.