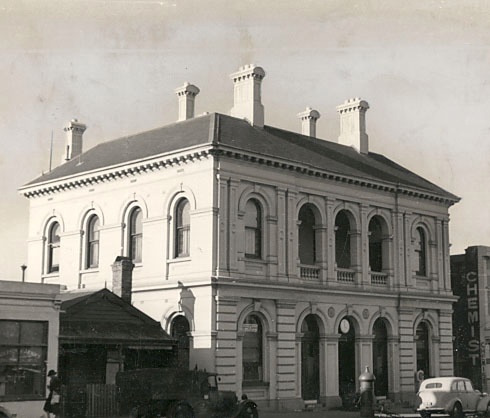 The Carlton Post Office was erected in 1883 by James Kennedy for the Public Works Department. The design of the building can be attributed to J H Marsden, then an assistant architect who executed the working drawings. The two storey brick structure has rendered facades. The street facade is composed of a three bay two tier arcade flanked by slightly projecting solid wings. Both floors are articulated by a pier and arch system and superimposed trabeation.
This is a fine example of the palazzo type post office. Its transition, classical style between conservative and boom classicism, is evidenced by the use of superimposed rusticated piers on the ground floor. The notable composition with arcades on both floors creates a solid and void effect. The superimposed trabeated systems and two tier arcades are unusual features in this building and design type. The free standing quality of the building is also notable. It is a dominant and essential feature of the neighbouring area.
The original ground floor arcade has been enclosed and now forms part of the main postal chamber. The surviving chimneys should not be removed.
Classified: 25/12/1970