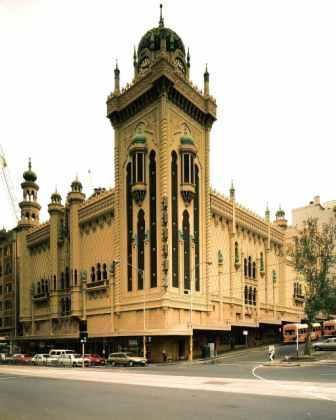 The former State Theatre (opened in Febuary 1929) was the largest and most exotic cinema in Australia. Built to designs by the American cinema architect, John Eberson in association with the prominent Melbourne architects Bohringer, Taylor and Johnson, the former State is of National Significance as one of only three extant examples in the country of an "atmospheric" cinema interior. It's subdivision in 1962 into the Forum and Rapallo cinemas retained most of the unique decoration and is important as the first example of "twinning" in Australia's cinema history. The exterior is also a notably exotic design.
Built at the climax of the boom years in Cinema construction, the former State Theatre was opened and operated by Union Theatres (the forerunner of the Greater Union Organisation) in direct competition to the Regent Theatre, the flagship of the "Regent" cinema chain. It has the largest capacity of any cinema in the country with 3371 seats (the Regent had 3265) and was one of the four major picture palaces built in Melbourne in the 20s (the other two being the Capitol and Palais). John Eberson pioneered the "atmospheric" cinema in the United States and in Australia the only other surviving cinemas in this style are the Capitol in Sydney (which is in fact an almost exact reproduction, though mirrored, of the former State theatre) and a cinema in Paddingon, Brisbane. Unlike the generally "Versailles/Palace" auditorium of most picture palaces, this form of cinema design attempted to create the illusion of an exotic walled garden in the auditorium, complete with appropriate statuary, a blue ceiling, twinkling stars and projected clouds.
The interior incorporates elements of Italian medieval, Renaissance Baroque and Spanish Mission styles combined with bold classical Roman and Renaissance architectural forms to create a lush, impossibly exotic "atmosphere". The exterior of the Forum Cinema is also notable as the most exotic and ornate of all such picture palaces in Australia (perhaps, of any city building), an eclectic combination of Moorish, Moghul and Alhambresque elements.
The enclosure of the Balcony section to create two separate cinemas, the Forum and the Rapallo in 1962, is important as the first example of such 'twinning' in Australia (and possibly the world) as well as signifying the economic decline of the cinematic industry in post-war Australia. The modification of the cinema by Cowper, Murphy & Appleford, was sympathetically handled with the retention and reinstatement of most of the original 'atmospheric' decoration.
Classified: 01/08/1994