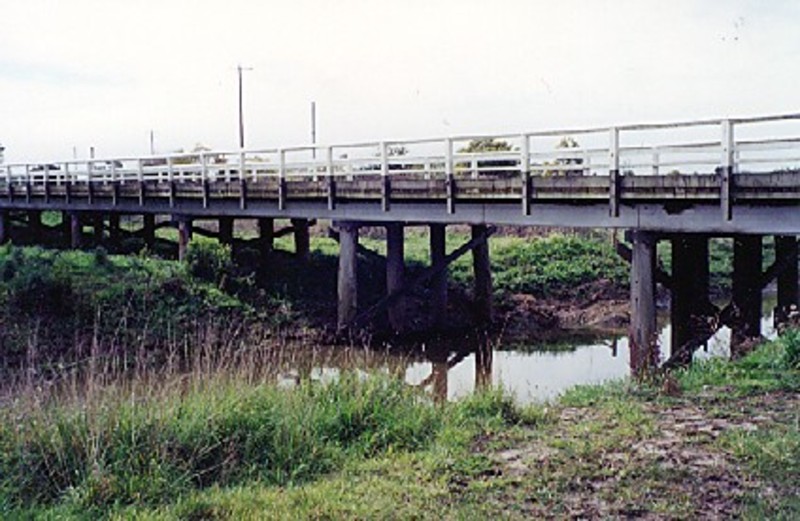 The 'twin' timber-and-steel bridges popularly known as 'Bayles Bridge', built in 1950, are of scientific, historical, social and aesthetic significance at State level.
At seven and eight spans respectively, each of these contiguous 'twin' bridges ranks in size among the top 10% of timber road bridges in Victoria. They are the largest surviving swamp road bridges in Victoria, and the most impressive of the once-numerous series of Koo-wee-rup Swamp timber and steel road bridges. Their main design features are representative of bridges built across the adjacent swampland drainage systems in the years immediately after World War 2, but now rapidly disappearing. The State Rivers and Water Supply Commission and Victoria's Country Roads Board co-operated in creating suitable bridges at major main-drain crossings. Timber piers were preferred to concrete because they performed better in unstable swamp subsoils, but in such perpetually-damp contexts steel joists and crossheads ensured a longer working life for heavy-duty timber decks. Such substantial swamp bridges constructed largely of timber, with steel girders topped by dual layers of timber decking (transverse and longitudinal), are becoming rare in Victoria today.
The Koo-Wee-Rup Swamp has long been the site for the most important of Victoria's State-instigated swampland reclamation projects, and these largest and most impressive of the swamp's traditional timber-and-steel bridges were built by State authorities and have a State significance. These bridges constitute a reminder of the vital contribution made by an efficient road and bridge infrastructure through the old swamplands, serving market gardens that fed Victoria's rapidly-growing metropolitan population in the era of post-war reconstruction immediately after World War 2.
Socially, the importance of these representative swamp bridges is considerable. Without such big swamp drains and their essential bridge crossings, little swampland settlements like Bayles could never have been created and local farming communities could not flourish. These particular bridges have enhanced social value because of their close proximity to a fauna reserve for swampland wild-life.
Aesthetically, these very practical human artifacts created largely from natural materials specifically for a major swampland context, fit in very well with their low-lying rural physical environment. The once-broad wetlands have generally been transformed into fertile green agricultural land, but along the big drains with their fauna reserve for water birds something of the strange beauty of the original Koo-Wee-Rup wetlands is preserved. Replacement of these largely-timber structures in concrete would substantially detract from the rustic charm of this swampland setting.
Classified: 05/06/2000