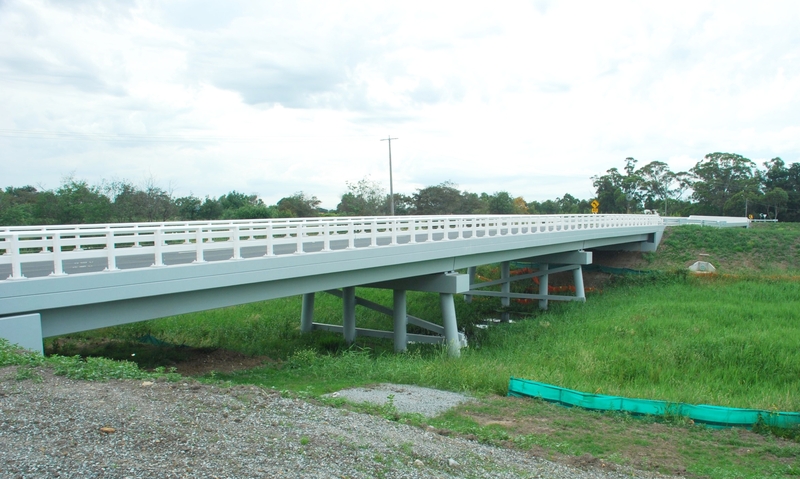 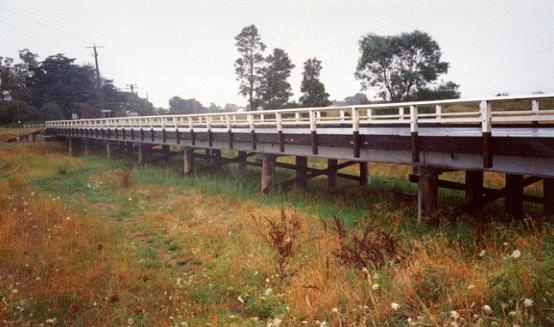 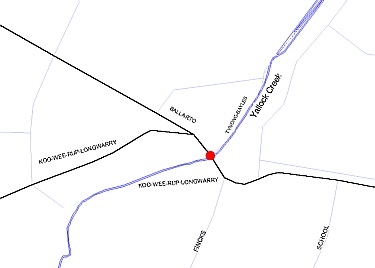 What is significant?
The ‘twin’ timber-and-steel bridges popularly known as Bayles Bridge, built in 1950, consists of two adjacent bridges over Yallock Creek and No.4 Yallock Drain, on the Koo-Wee-Rup to Longwarry Road. The bridges cross two major drainage channels of a complex drainage network in typical Koo-Wee-Rup Swamp terrain. They are situated adjacent to a proclaimed fauna reserve for swamp wildlife, just outside the little township of Bayles. The bridges are constructed of rolled-steel joists on timber piers, with standard CRB longitudinal-timber decks and side rails. The bridges are of seven spans (64.6 metres long) and eight spans (74 metres long), with individual steel joist spans of just over 9 metres. They have several increasingly uncommon structural features, being the steel crossheads on the timber piles, and the rare dual layers of timber decking, transverse below and longitudinal above.

How is it significant?
The Bayles Bridges are of historical and scientific (technical) significance to the State of Victoria.

Why is it significant?
They are of historical significance as the largest and most impressive bridges associated with Victoria’s most important swamp reclamation project. The bridges were a State, rather than a municipal project, carried out by the Country Roads Board in conjunction with the State Rivers and Water Supply Commission. The farming land reclaimed from the Koo-Wee-Rup supplied much of Victoria’s rapidly-growing metropolitan population with dairy and market garden produce by the mid twentieth century. The bridges were part of the infrastructure works carried out on the swamp during the period of post-war reconstruction.

They are of scientific (technical) significance as bridges designed by the CRB, in co-operation with the SR&WSC, specifically for swamp conditions. Timber piers were preferred to concrete because they performed better in unstable swamp subsoils, but in such perpetually-damp contexts steel joists and crossheads ensured a longer working life for heavy-duty timber decks. Such substantial swamp bridges constructed largely of timber, with steel girders topped by dual layers of timber decking (transverse and longitudinal), are becoming rare in Victoria. They are also amongst the last major timber bridges to be constructed in Victoria, with prefabricated concrete structures predominating thereafter. The bridges are also amongst the largest timber bridge in Victoria. Each of the bridges ranks in size among the top 10% of timber road bridges of their type in Victoria. Combined, their number of spans, and total length, are exceptional. They are the largest and most impressive of the timber bridges built on the Koo-Wee-Rup Swamp.