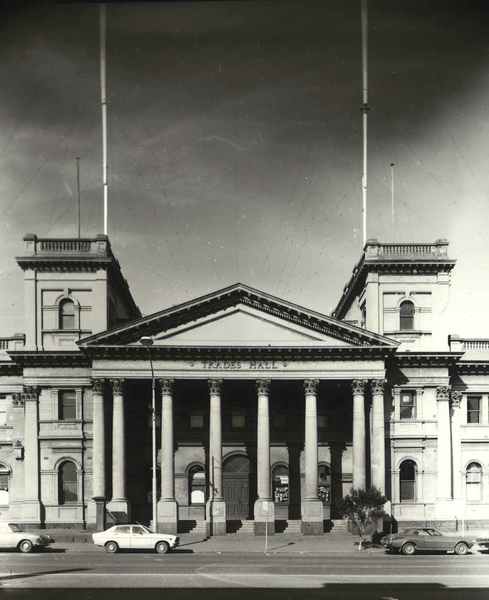 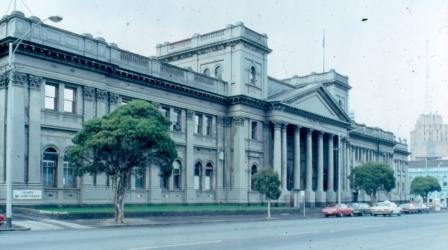 Melbourne Trades Hall is one of Melbourne's grand nineteenth century institutional buildings and is a particularly notable example of the work of Reed and Barnes and its later derivatives. Its long facades incorporating the main porticoed entrance flanked by low towers is well composed and this fine composition is particularly notable when it is considered that the building is sparingly detailed and the interior is most auster and these aspects somewhat detract from its architectural quality. However this austerity is well preserved as the building has been subjected to few external and internal alterations.
The Trades Hall Building, was erected in stages from 1873 onwards. The earliest portion comprised a two-storey rectangular building set well back from Lygon and Victoria Streets. Its rendered facades articulate the arched windows at both levels with impost and extrados mouldings and each storey is expressed by stylized doric pilasters. This building is the nucleus of the present structure and contains a wide central corridor at both levels. The architects were Reed and Barnes, the contractor was John Jude. The firm Reed and Barnes and its later derivatives Reed, Smart and Tappin; Bates Peebles and Smart, etc. remained as architects for the building until as late as 1926.
In 1882 a long building was added to the north of the original wing and included a grand stone staircase connecting ground and first floors. It appears that the facades of this building were originally decorated to match the earlier wing.
The next additions date from 1888 and comprised a two-storey wing fronting on to Lygon Street. It appears that this time the design for the grand Lygon Street facade with its giant corinthian order were prepared. The 1888 addition included a large first floor hall (known now as the old ballroom) and probably involved the refacing of part of the 1882 additions.
The Lygon Street facade was completed in later additions in 1907 and 1922. In the meantime in 1890 a large Council Chamber was added to the rear of the complex. The chamber, which was burnt out in 1962 and subsequently rebuilt, is located on the first floor and is elevated on the original six metre iron columns. An extensive wing fronting on to Victoria Street which fully obscured the south elevation of the original building and which matched the Lygon Street facade was added in 1922-26. There have been substantial rear additions in recent years. As headquarters of the trade union movement and until 1972 of the Victorian branch of the Australian Labour Party, the building has many important historical associations.
The Classified sections of this building comprise the original wing erected in 1873 (section 1 on the plan and the subsequent wings erected in 1882 Section 2), 1888 (section 3), 1890, 1907 (section 5), 1907-1922 (section 7), and 1922-1926 (section 9) plus the portico (section 6) and the flanking towers (not numbered).
Classified:13/11/1980
Revised: 03/08/1998