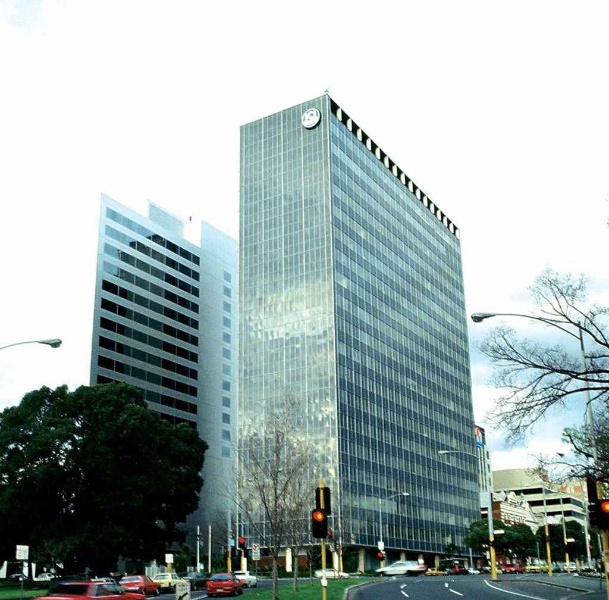 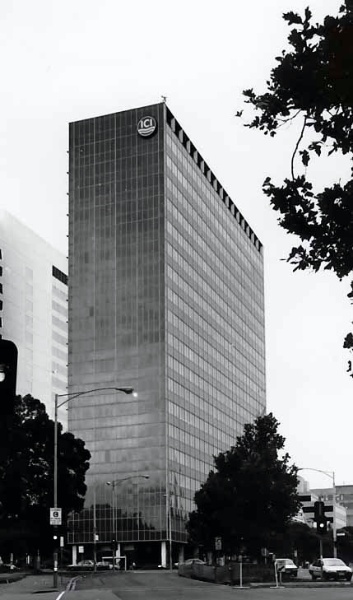 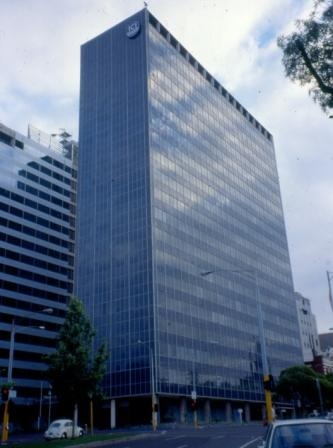 Statement of Signficance: ICI House, with its concrete encased steel frame and sheer glazed curtain walls, was completed in November 1958, and was hailed as a new symbol of its time. Set on an open landscape site on the eastern hill edge of the central business district, the office block appears as a soaring tower terminating the axis of Lonsdale Street. This setting of a prismatic form of unprecedented height enhanced the architectural expression of a corporate image. In the context of the post-war years, of population and migration expansion, economic recovery and growth, and the resumption of building materials production and capital works, new and sophisticated corporate arrangements were demonstrated by the construction of large architect-designed factory complexes in the suburban outskirts and tall office blocks in the city.
ICI House was the tallest building in Australia until 1961. The 70 metre (230 foot) high office block and the service block of 84 metres (275 feet) exceeded the 132 foot (40 metre) height restriction previously enforced in Victoria. The special grant to I.C.I. House design proposals in July 1955, awarded by provision of the Uniform Buildings Regulations, led to the general abandonment of the old limit and the eventual redefinition of the central Melbourne skyline. The greater height was permitted because the site coverage was a percentage of the total site area. Plot ratio determinations for city sites were evolved following this grant.
International aesthetic preferences and local developments in construction techniques of the 1950s were imaginatively amalgamated in the design of I.C.I. House. The inspiration for such curtain-walled prismatic forms was Lever House, New York, 1952, by Skidmore Owings & Merrill. The glazed curtain-wall was evolved from a series of buildings and projects in Europe, 1911-25 by Walter Gropius and Ludwing Mies van der Rohe, in contrast to expression of the structural frame and its fire-proof cladding in office tower buildings in Chicago and Melbourne of the 1880s and 1890s. Unlike Lever House, the ICI House has an articulated capping to the office block, and the structural members stand freely under its ground floor undercroft, giving a sensation of continuous and open space, being the formal principles of roof-garden and piloti advocated by Le Corbusier in the 1920s. The glazed office block with a discrete solidly clad service tower in the I.C.I. design pre-dates the same division of elements found in the Crown Zellerback building in San Francisco, 1959, by Skidmore Owings and Merrill.
Curtain-walling appeared in new facades in Collins Street from 1956, but the seventeen floors of air-conditioned offices in the ICI tower are clad all around in elegantly proportioned fixed panes in aluminium frames, including the shorter east and west walls that consist of reinforced concrete panels underneath the glazing. Innovative pre-cast reinforced concrete units were used for steel beam encasings and for spandrels. Blue glass in the curtain-walling covers the spandrels. The precast concrete floor units were finished in an 80mm continuous in situ reinforced concrete slab acting as a brace for wind loads. False ceilings of metal pans, treated for acoustic absorption, have air-conditioning, lighting, sprinkler, and fire detector outlets, and contain the air-ducting, electricity and plumbing supply lines, the pans readily moved aside for access to the lines. Originally a demountable partition system was installed with timber panels and usually clear plate glass, occasionally translucent glass, fitted between steel tube mullions, subsequently removed in renovations. The service tower cladding has a polished finish to granite aggregate precast concrete wall panels.
Osborn McCutcheon was the architect, in charge of a team of architects and structural engineers from within the firm of Bates Smart & McCutcheon, together with the electrical engineers Julius, Poole & Gibson and W.E. Bassett & Associates, mechanical engineers, and Rider Hunt & Partners, quantity surveyors. The builder was E.A. Watts. The building was known for the initial failure of glass panes on the west facade, which C.S.I.R.O. research found to be shattering because of nickel salt impurities in the Belgian glass.
The Classification does not include the logo now fixed to the western facade.
Classified: 16/10/1986

Statement of Significance: The fountain at the ICI Building is of both aesthetic and historical importance.
Aesthetically it is Gerald Lewer's most ambitious and most successful fountain and his only piece of public sculpture in Melbourne. Lewers also designed the gardens on the Nicholson and Albert Street frontages of the ICI building, but with subsequent changes it is now difficult to ascertain how much of his original planting remains. Of the many fountains this artist designed and installed, this is the largest and the only one in Victoria- the remainder are in New South Wales.
Originally the entrance to the building was in Nicholson Street and one walked up a long path passing the fountain before reaching the main door to the foyer. As the building was extremely high (and possibly intimidating) the fountain softened the impact, established human scale and introduced the gentle sound of running water.
The allocation of space beside the building and the employment of an artist to design and install a fountain and garden was most unusual for the period.
Classified: 12/11/2001