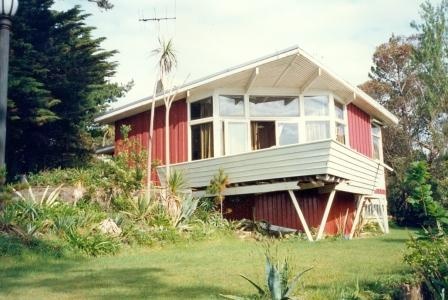 The house Blue Peter, was in almost original condition and was a major contributor to the historically significant Gulls way residential precinct, developed in the 1950s through the division of the Yamala estate. Designed by the architect Rae Edwin Featherstone for client/owners Mr & Mrs George Raymond, and built in 1956, the house gained national recognition in the publication 'Best Australian Houses' in 1961. The architectural firm Chancellor and Patrick designed a sympathetic addition to the East end of the building for the same client in 1962. Blue Peter typifies the modern, more exclusive, beach house of the 1950s, with its open planning for indoor/ outdoor living and raised balcony area over-looking Davey's bay and the broader vista of Port Phillip.
It also draws on the regional work and traditions of the Mornington Peninsula - particularly the 1950s work of Chancellor and Patrick - as well as the Bay Region work on the West Coast of America, through the use of vertical board and batten, horizontal lapped boarding, the use of stone for retaining wall and interior flagging, and the expression of the post and beam structure internally and externally. It also has links with Sydney regional work of the early1950s. At the same time the design is aligned with the then current international interest in geometry and structure, particularly the notion of suspension, in the play of the square core of the plan against the raised triangular balcony area. These interests were central to the group of architects generally discussed as the "Melbourne school". Blue Peter is one of only a few extant Melbourne buildings in original condition that explore the notion of suspension through triancular planning.
Demolished: November/1991 prior to Trust Council's formal Classification.