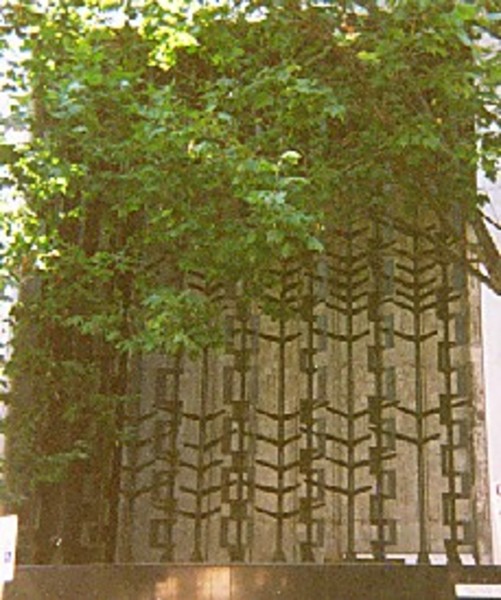 With only one or two exceptions, the vast majority of Lenton Parr's work is not only three dimensional, but is also free standing. An earlier work in relief is The Tree of Man, executed in concrete on an external wall of the Chemistry Building at ANU, Canberra in 1962-63. The bronze Customs House screen was installed in 1967. In 1968 Lenton Parr exhibited a model for a fabricated aluminium screen, as part of the Comalco Invitation Award for Sculpture in Aluminium, shown at the National Gallery of Victoria.
The Customs House work is therefore a rare example of a sculptural screen by this major Australian sculptor.
As the screen was specifically designed to hide an electricity sub-station (while allowing a free flow of air) it is also unique as an aesthetic solution to a practical design problem.
Originally located at Customs House, 1 William Street, Melbourne, relocated to the McClelland Gallery, McClelland Drive, Langwarrin in 1967.
Classified: 01/04/1996