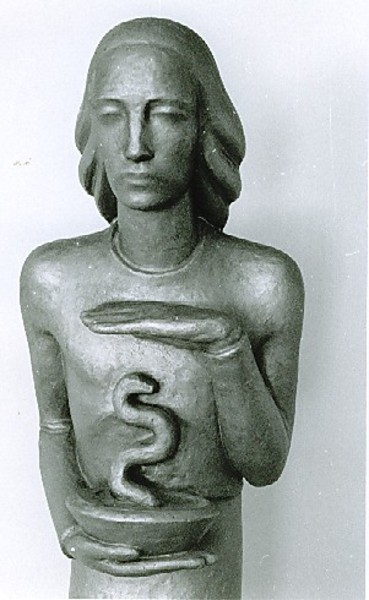 "Aesculapius" is significant at the Regional level as a rare example of the artist's work in Victoria. Dr Arthur Fleischmann trained in Europe, travelled in Europe, South Africa, USA, South America and Indonesia. When he arrived in Australia from Bali in 1939, he brought a breadth of cultural experience and a knowledge of both traditional and modern sculpture, which was unusual in Australia at the time.
He produced a number of academic works, such as portrait heads and bronze doors for the State Library, Sydney, but was also one of the earliest sculptors in Australia to practise the "truth to material" philosophy, which was an essential element in much modernist work.
The work for Prince Henry's Hospital is the only known commission he carried out in Melbourne and is therefore of considerable interest. It is a typical early modernist work - using the human figure in a stylised manner, with a degree of simplification and abstraction. Modelled in clay, the figure was cast in a metal alloy, using an electrolytic casting process - which illustrates Fleishmann's interest in working in a variety of materials and using new processes and new materials.
Classified: 18/05/1994
File Note: Sculpture moved to Monash Medical Centre.
See also B5600 Prince Henry's Hospital.