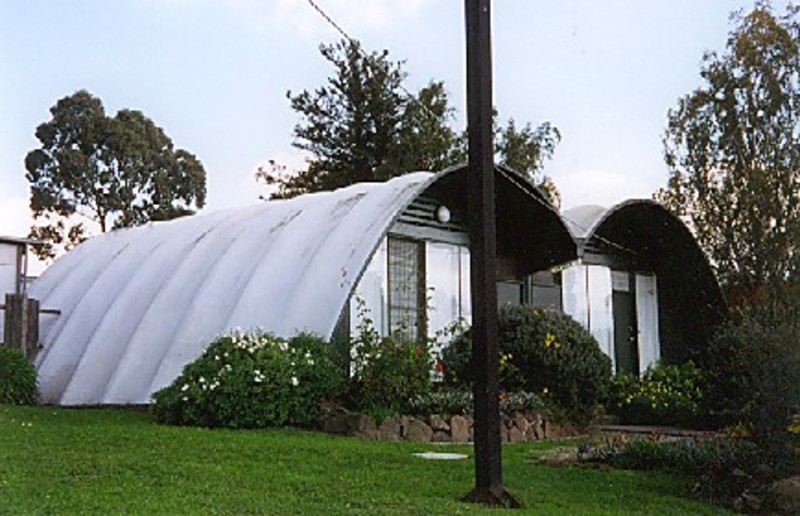 The former supermarket and adjacent W Wood House are architecturally of national significance as a rare example of the novel Ctesiphon concrete construction system, and as one of a number of important structurally experimental works by Robin Boyd, Australia's most prominent architectural critic and writer of the 1950s and 1960swho was one of its foremost architects. Designed in 1952 and completed in 1954, the shop and house are located at an important suburban intersection and form a minor urban precinct. The sculptural arched forms of the two buildings recall similar contemporary designs by Brazilian architects Oscar Nie meyer and Affonso Reidy whose exuberant concrete expressions were to herald a new period of form-making for International Modernism in the 1950s.
The Wood House and supermarket were Boyd's only experiment in this structural system but reflect his broad interest in experimenting with new ideas, be they structural, aesthetic or material. The supermarket and house (separate buildings) are each contained within twin Ctesiphon arches, a concrete construction system patented by local builders McDougall and Ireland . The arches were constructed by forming timber arches at four feet centres with hessian suspended in between and three inches of concrete over. The arches therefore became corrugated in the lateral direction providing structural stability across the surface of the roof. Thus a single structural element was able to act as both roof and walls. The Jordanville Supermarket and Horner together with the Rice House, Eltham, 1953 by Kevin Borland are the earliest known examples of this construction technique in Victoria.
Despite minor cracking and painted commercial signage, the residence and supermarket, now a liquor store, remain in good physical condition.
Classified: 02/10/1995