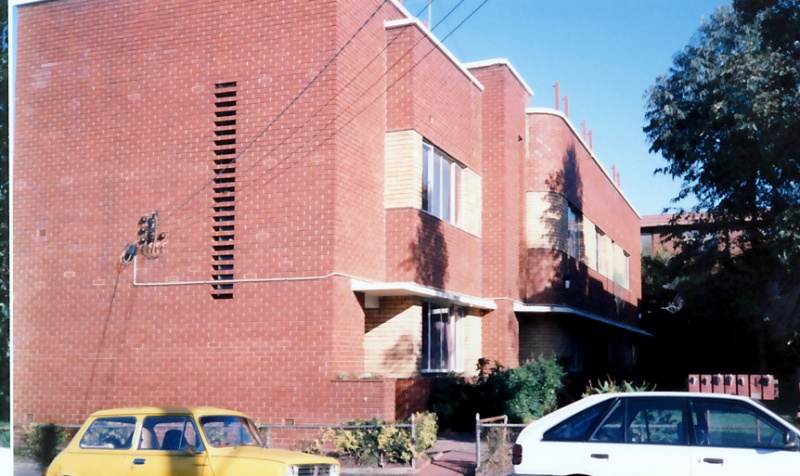 The Brunswick Fire Station and Flats are architecturally significant at a state level as a fine example of the innovative work in the 1930s by the architects Seabrook and Fildes, who are acknowledged as having brought modern European architecture to Victoria in the form of Norman Seabrook's 1934 design for the MacPherson Robertson's Girls' High School. Designed in 1937, the bold horizontality of the glazing and brick patterning counterpointed by vertical elements such as the flagpole and vertical slit wondows, and the simply modelled prismatic forms of the fire station complex continue this firm's experiments with the cream and red brick vocabulary of Dutch modernist Willem Dudock. One of the twelve metropolitan fire stations designed by this firm of architects, the Brunswick complex differs from their other significant stations, Brighton (1939) and Windsor (1939-40), in that the two linear blocks of flats at the rear of the the station to Blyth Street are detached rather than integral with the main building allowing garden courtyard spaces between and northern orientation for the flat interiors. The massing of the three buildings at Brunswick is also of note as possessing an entirely appropriate scale to its mixed use. This layout refers to advanced block and precinct planning then employed in Europe.
The use of large areas of cream brick, a typical feature of modern buildings in Melbourne in the 1930s, also has a special meaning in Brunswick as the cream brick was first developed by Brunswick brickmaker John Glew some eighty years earlier and was used as a design feature of several notable buildings in the locality from as early as the 1860s.
Classified: 15/04/1992