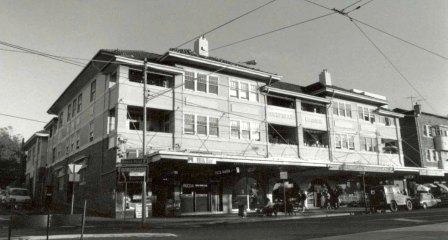 Summerland Mansions, designed by Christopher Cowper and completed in 1920, is of State architectural and historical significance.
Summerland Mansions is architecturally significant for its highly distinctive design which is a sophisticated mix of Inter-War Stripped Classical, Inter-War Mediterranean and Arts and Crafts styles. This sets it apart from the Queen Anne/Edwardian style for which the architect, Christopher Cowper, was known. The block facing Fitzroy Street has a strong street presence with a dominating gridded frontage, which is given a more domestic character by the use of a hipped tiled roof with projecting eaves, and a pair of higher bays, deepset balconies, and multi-paned windows. The interior has stair halls with gridded timber panelling and matching gridded glazed walls to the flats, displaying a Japanese influence. Other noteworthy features include the maids and service rooms, accessed by a 'tradesmen's entrance' rear stair, glazed sleep-outs, a large communal roof-top area on the Acland Street block and the restaurant centrally located on Fitzroy Street, originally a common dining room for residents. The flats are also relatively original, retaining their leadlight windows, hall cupboards, built-in dressers between kitchens and dining rooms, milk and bread hatches, serveries, tiled fireplaces, letter boxes and door mats emblazoned with the name, Summerland Mansions.
Summerland Mansions is historically significant as a rare combination of mansion flats built to the street edge with shops at the ground level in the European manner. This is an extremely rare type in Melbourne, generally only found in St. Kilda. The flats are also important for their association with St Kilda, a suburb that is the most strongly associated with a high density of flat development since World War 1 in Melbourne. The spacious mansion flats, originally aimed at a wealthy clientele, represent the heyday of apartment living in St Kilda.
Classified: 04/10/1999
Show more
Show less
All information on this page is maintained by National Trust. Click below for their website and contact details.