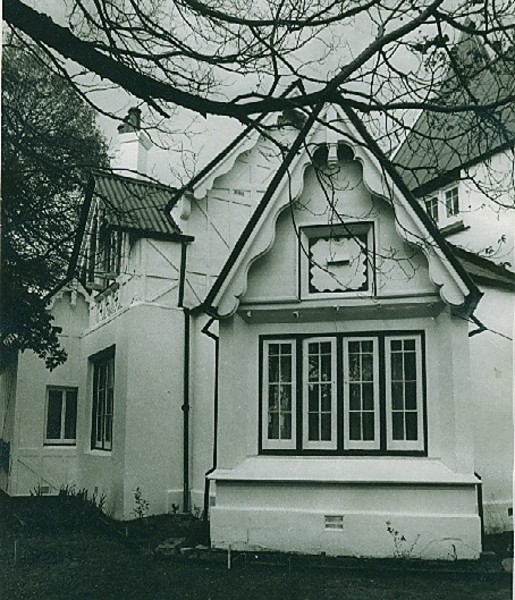 Wattle House was built by noted Colonial era architect Samuel Jackson as his own residence in the 1840s, which he occupied until the 1860s. Designed in a picturesque Gothic Revival style, various additions were made in the same style up to the 1880s.The detailing includes elaborate half timbering, decorative timber bargeboards, many gabled roof-line and stained glass window bays. By the 1850s, Wattle House was on a large block, with many outbuildings, and designed to be admired from at least three sides. Originally approached from the Grey Street side, it now faces Jackson Street, named after the architect.
A number of mature trees around the boundaries are the remnants of an exotic garden. The row of trees along its northern boundary which date from the c1850s includes two mature and very large Dutch elms (Ulmus x hollandica) and a tall pepper tree (Schinus molle).
It has architectural significance as one of the few pre 1850 Gothic Revival houses in Victoria, and is a particularly picturesque example. Later additions only enhanced its picturesque qualities, and do not appear to have altered the original 1840s portion of the house. It is also important as one of the few surviving buildings designed by Samuel Jackson, one of the earliest architects to practice in Victoria.
It has historical significance as possibly St Kilda's oldest residence, and one of the relatively few pre-gold rush buildings to have survived in Victoria, which are particularly rare in Melbourne.
Classified: 'Local' 27/01/1966
Revised: 20/09/1984