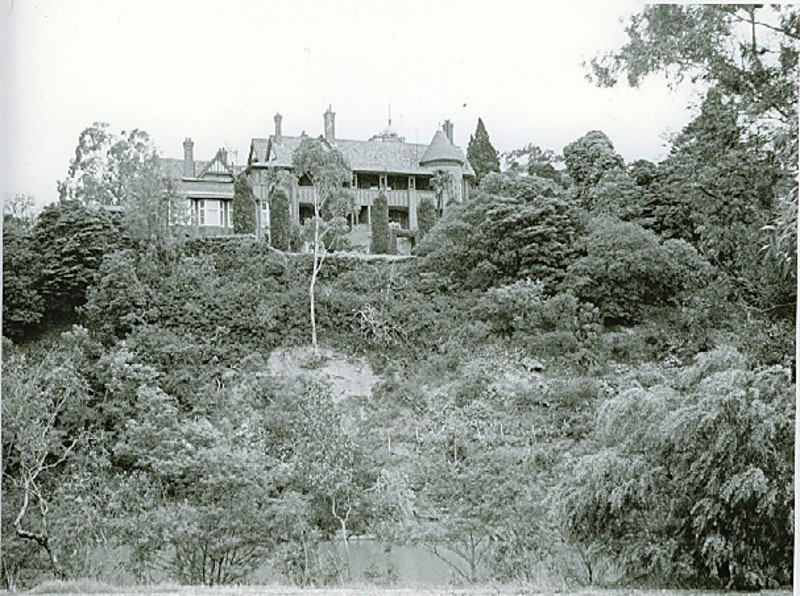 Edzell was designed by the architects, Reed Smart & Tappin in 1892. Alfred Smart was in charge of the design of this large red brick Elizabethan Revival house which was built for James Cooper Stewart. Stewart was a solicitor, Smith ward Councillor and Mayor of Melbourne during 1885-6.
Externally, the house possesses extensive half-timbered gabling, Marseille-pattern tiles and terracotta ridging from this period, along with two asymmetricially placed turreted, corner towers facing the Yarra River. There was also a two-level timber verandah.
Internally, the Dining Room remains near to original, with its panelled timber ceiling and dado which were executed in New Zealand Remu, embossed floral-pattern wallpaper, overdoors and the panelled timber mantel and overmantel with their carved enrichments. The adjacent Drawing Room ceiling still possesses some of the pale tints of the original stencilled decoration but the dado has been painted over. In 1917, the architect Walter Richmond Butler, designed extensive but sympathetic external additions and a new garden for the new owner George Russell.
A large ballroom was added to the east and internally this continued in the Tudor manner, with its panelled ceiling and dado. However externally the horizontal parapet offered little more than alignment to the original design.
The main verandah was substantially replaced with a half-timbered, patterned brick balustrade, and on the south, the original gables were extended in the same pattern, over a new brick verandah. Similarly, the entrance porch was rebuilt on brick piers.
Subsequently, under the ownership of a Mrs Rose Krantz, Edward Billson designed the subdivision of the interior into two maisonettes during 1935. It was divided into six flats by 1947.
This involved superficial internal alterations and a new stair leading from the former ballroom. Edzell is an early and notable example of the Elizabethan Revival, used in a residential context and has since maintained this character both internally and externally.
Its magnificent setting, picturesque roofline and symmetrically located mature trees (conifers and palms), together with the wild garden, which descends to the Yarra River, contribute to the considerable importance of this fine house, are included
Classified: 15/10/1981
Revised: 03/08/1998
Show more
Show less
All information on this page is maintained by National Trust. Click below for their website and contact details.