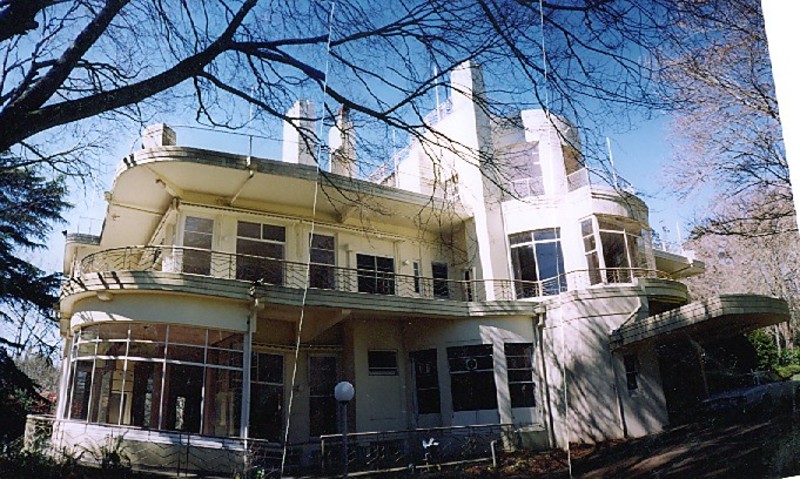 One of the finest examples of the Art Deco Mansion in Australia; built in 1930-1933 for the Nicholas family. The design by Harry Norris sits uniquely at the midpoint beteewn the decorative zig zag moderne of the 1920s. The vast three storey house, built in reinforced concrete, is a rare, elaborate example of its type in Australia and comparable with works in Britain and the United States. Built for a wealthy industrialist, Burnham Beeches is a period exemplar of the up-to-the-minute high style living and entertaining of the 1930s in Australia.
Classified: 29/10/1987

Garden significance:
Burnham Beeches, developed for Alfred Nicholas c.1929-39, the residence erected 1930-33, much of the garden donated to public ownership by his family as a memorial in 1965, and the residence now converted to a hotel, is of State significance:

- as a property created by the vast wealth of its owner in a period of world economic depression: this is best exemplified by the residence and outbuildings; comprehensive water reticulation system; the massive scale of the terraced rockery; the extensive rockery around the lake and waterfall; the vast extent of the constructed landscape; and the continuity of a tradition of hill stations from the nineteenth century (and the inescapable parallels with his brother George and his property Alton at Mount Macedon);

- for the boldness of its conception: this is demonstrated by its size (approximately 13 ha of landscaped garden which is equivalent to almost half of the area of the Royal Botanic Gardens) and the massive scale of most components; by the confident manner in which the steep terrain has been controlled by terraces, paths and water features; by its predominant planting of large trees and shrubs rather than detail planting; by its bold use of stonework in rockeries, walls, paths and water features; by the incorporation and landscaping of neighbouring land as part of the garden (e.g. the tan track);

- for the survival of considerable planting (especially tree planting) incorporated or envisaged by the owner Alfred Nicholas, his designer Hugh Linaker and gardener Percy Trevaskis: whilst not displaying the same range as the original planting, the garden still maintains a fine collection of conifers, mature indigenous trees (notably Eucalyptus regnans) and exotic shrubs;

- for the retention of buildings and structures from the original garden layout: these include the gates, stone walls, boathouse, Blackfish Pond outlet, brick enclosures (presumably for compost), paths and steps;

- for its aesthetic qualities: these are derived from the maturity of the original design concept and best demonstrated by the drive, terraced woodland and lake (although in some areas, notably the terraces, the planting is over-mature and inappropriate to the original design);

- for the continuity of major design themes, including stonework, planting (especially the combination of indigenous and exotic planting) and water features;

- as a property renowned for its completeness and attention to detail: Burnham Beeches comprised extensive residential accommodation, large garden, sufficient rural land to enable self-sufficiency and a complete range of complementary outbuildings;

- for the manner in which the residence provides a dominant focus for the landscape and garden, an aspect heightened by the radical adoption of the moderne architectural style;

- for the historical and social significance of the owner Alfred Nicholas and his family, noted for their part in the 'Aspro empire'; the designer Hugh Linaker, best known for his bold landscape schemes for The Shrine and Domain in Melbourne; and the involvement of the local community in the construction and maintenance of the property.

The residence is of National significance as one of the finest examples of the Art Deco mansion in Australia. The design by Harry Norris sits uniquely at the mid-point between the decorative zig zag moderne of the 1920s. The vast three-storey house, built in reinforced concrete, is a rare, elaborate example of its type in Australia and comparable with works in Britain and the United States. Built for a wealthy industrialist, Burnham Beeches is a period exemplar of the up-to-the-minute high style living and entertaining of the 1930s in Australia.