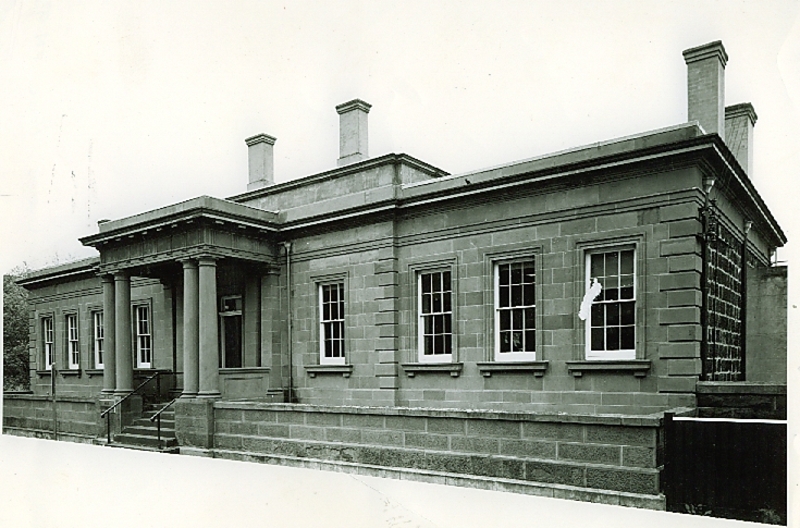 The Geelong Customs House was built in 1856 by Melbourne contractor W G Cornish, replacing earlier structures of 1838 and 1845 on the Customs Reserve. The design of this colonial georgian style three storey structure can be attributed to colonial architect James Balmain assisted by Edward Davidson, Clerk of Works. Classicially modelled Barrabool sandstone ashlar is employed on a rubble bassalt carcass with the axial plan fronted by a central Tuscan portico.
The Geelong Customs House is the finest mid nineteenth century public building in western Victoria. This distinctive georgian composition clearly reflects the influence of earlier N.S.W. colonial public building traditions as espoused by architect James Balmain. The structure is on a site which has served as the Customs Reserve since 1838 and the present Customs House served the port of Geelong at the height of its activity in the 19th century. The building is an exemplar of freestone masonry construction in Victoria.
The fabric of the Geelong Customs House has not withstood the ravages of time and corrosive atmosphere. The Barrabool sandstone is badly deteriorated and restoration is to be effected. The interior remains basically intact.
Classified: 'National' 21/05/1959
Revised: 03/08/1998

Historic Area Statement of Significance: The Geelong Woolstores Historic Area is one of remarkable coherence and integrity. Standing at the corner of Geringhap and Brougham Streets, the row of woolstores stretches away to the east in a unified scene, unequalled in terms of intactness and coherence elsewhere in Victoria.
The Area represents an important aspect of the process of settling the land in Victoria . The consequences of industry created a new economy, a new landscape and a new way of life. In terms of the lives of all of us as inhabitants of an industrial nation, it is the most relevant period of our past, not only because it is the most recent, but because the specific changes wrought during the last century provide the foundation of our present society.
Significant woolstore groups certainly exist elswehere in Australia, for example at Pyrmont and Ultimo in New South Wales, but those structures do not match the group qualities of the Geelong woolstores and were not specifically erected for the storage, handling and marketing of wool.
Classified: 04/08/1980.