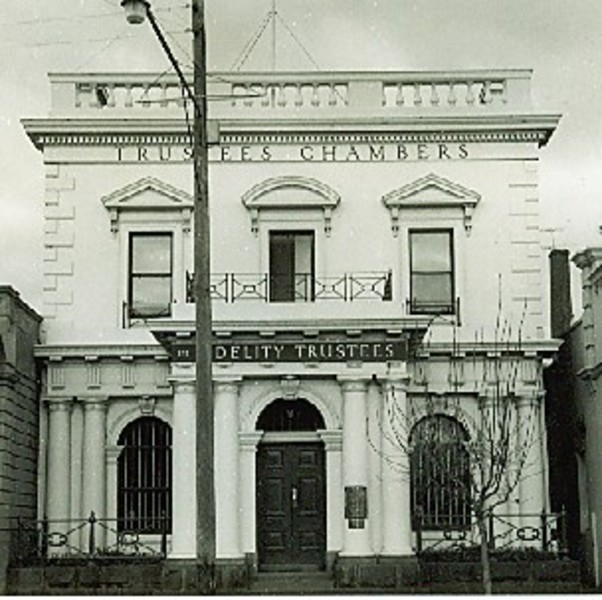 The Union Fidelity Trustees Chambers was erected in 1857 for the Colonial Bank from a conservative classical design by Geelong architects Shaw and Dowden. This two storey bluestone structure with stucco facade is composed of elements derived from the Italian Renaissance including a tuscan portico and engaged columns to the ground level with the upper level enhanced by pedimented windows, cornice and balustraded parapet.
The former Colonial Bank is a most distinguished conservative classical design and one of the principal works of the architectural partnership of Shaw and Dowden. This finely detailed building is an examplar of early stucco craftsmanship. The classical tuscan portico, with double engaged columns, unusual string course entablature and palladian bar ironwork is a most distinctive and central element in the design. The bank, which was erected in a banking precinct at the west end of Malop Street, relfects the prosperity of Geelong in the mid 19th century.
The exterior of the former Colonial Bank is intact. The interior banking chamber and offices have been adapted to commercial business requirements.
Classified: 27/11/1958
Revised: 03/08/1998