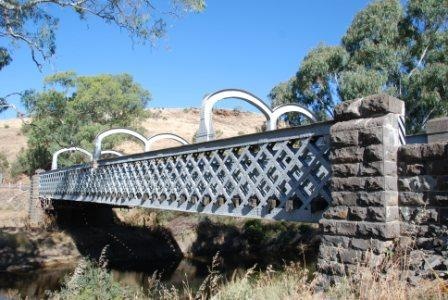 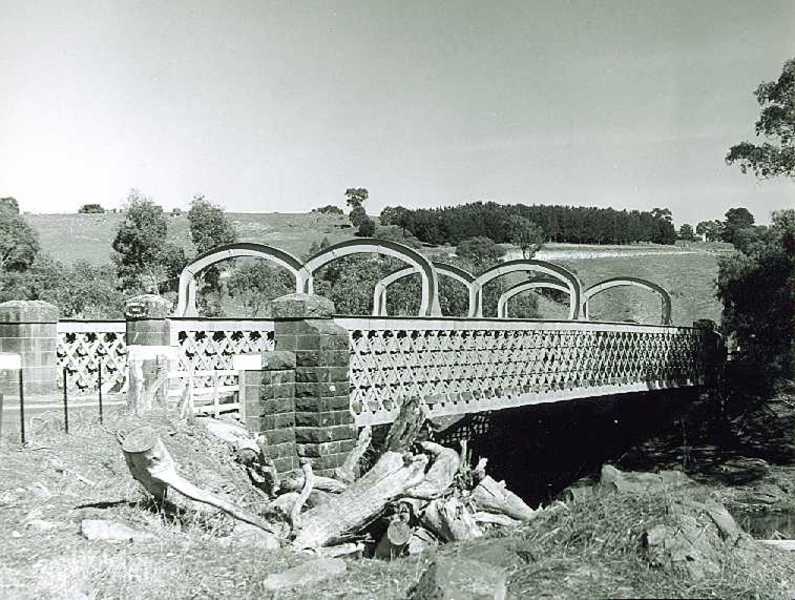 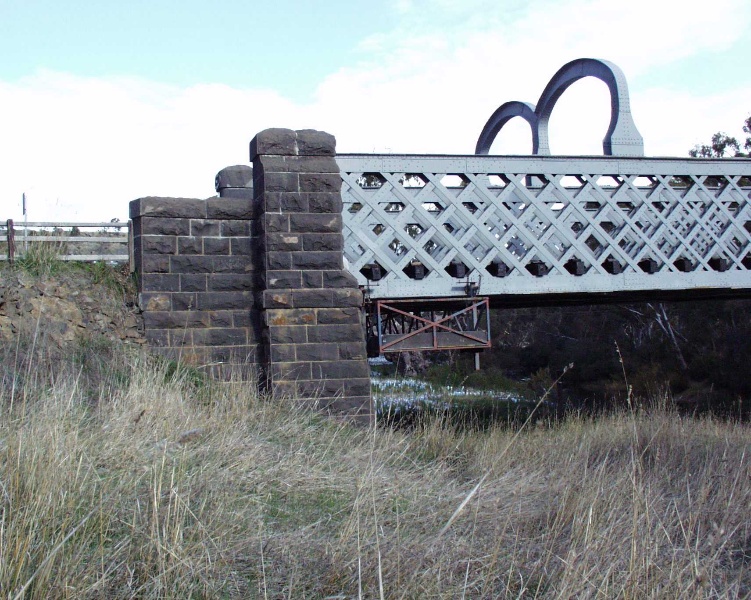 AHC CITATION
Redesdale Bridge (formerly referred toas Mia Mia Bridge), built in the years 1867-8, is a unique wrought-iron lattice-girder through-truss road bridge on stone-masonry abutments, with divided lanes and a longitudinal timber deck. It is historically, scientifically and aesthetically significant at State level, and stands out clearly above other Victorian examples of stone-masonry, iron and timber-topped colonial bridges for several reasons. It was constructed earlier than any other rural Victorian lattice-girder truss bridge, all the others having been built with benefit of hindsight into the devastating potential of freak floodwaters that had been unleashed across the State in 1870. The Redesdale Bridge is one of Victoria's most historically interesting bridges, built for a cross-country mail route that linked the prosperous goldfields centres of Kyneton and Heathcote. It is the second-oldest lattice-girder bridge in Victoria, after Hawthorn Bridge, and is in more original condition than that bridge. The Redesdale bridge was constructed from parts of a larger iron-bridge consignment originally imported from England in 1859 to bridge the Yarra River at Hawthorn, but replaced for that purpose when the ship carrying it to Melbourne caught fire and was scuttled in Hobson's Bay. When salvaged it bacame the subject of a controversial attempted 'deal' with the Victorian Government and lay neglected for several years, before much of its ironwork was modified and sold by the Port Phillip Foundry to the combined Shires of McIvor and Metcalfe for use at the Campaspe crossing. The bridge site can claim historical significance in its own right, it being claimed at the bridge's official opening to be adjacent to the scene of a significant early colonial battle between local Aborigines and early European settlers of the area. The divided-lane through-truss design at Redesdale, was created specifically for this difficult Campaspe River crossing site and is therefore unique. The design of the original Hawthorn bridge from whose components the Redesdale Bridge was constructed, had involved three rows of trusses below deck level. When these materials were used as through-trusses at Redesdale, the three above-deck trusses had to be linked and stabilised by two sets of unusual custom-built overhead arches, which give this bridge its striking appearance. Its lengthy single clear span of 54.7 metres, without use of intermediate piers, differs from the multiple-span designs of our other rural lattice-girder bridges. It also features a lognitudinal-timber deck, once common with this type of bridge but now very rare on surviving bridges of the colonial era. The few other surviving Victorian examples of this lattice-girder type are of deck-truss design (with trusses below deck level). They are not divided-lane bridges and their visual impact is toatlly different. The Redesdale Bridge's divided-lane through-truss design, unique in Victoria today, is reminiscent of the most impressive colonial-Victorian truss bridge of all: the (long-gone) first Keilor Bridge, on the 1850s Mt Alexander Road. The Redesdale Bridge and site are also outstanding in aesthetic terms. Its siting high above a broad and deep river valley where stone-masonry intermediary piers would be impractical, distinguishes it from other colonial Victorian lattice-girder truss bridges. Soaring iron arches linking unusually lengthy and tall triple-through-trusses of attractive wrought-iron work, combine with the physical ruggedness and visual impressiveness of this difficult river-crossing site, to make this one of Victoria's most aesthetically appealing road bridges.