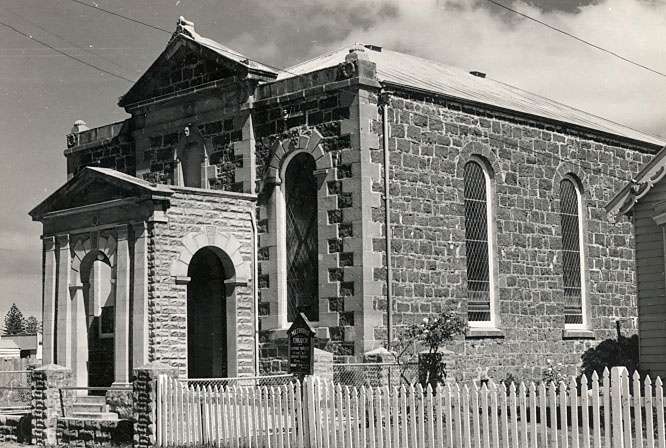 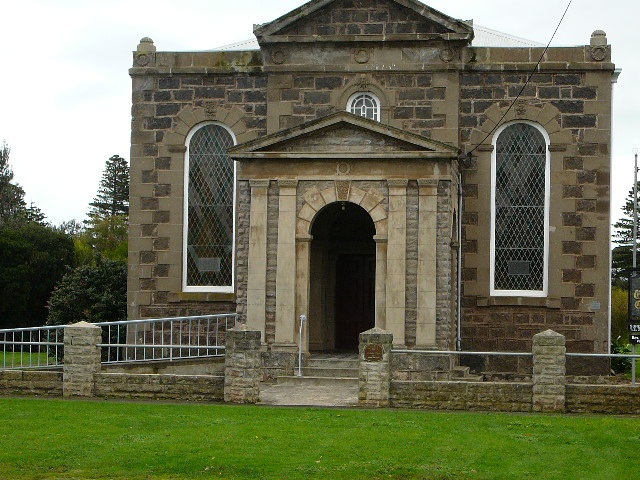 The foundation stone of the Methodist Church was laid in 1855 by William Witton, a famous itinerant preacher of the Western District in the 1840s. Walter McGill, a local sculptor, executed the elaborate ornamental carvings to the facade and entrance portal.
The rectangular bluestone structure is characterised by the elaborate and finely carved stone masonry of its principal facade and porch added later. Stone work to the main facade, with its round-headed windows, wreaths, parapet cappings, pediment and acroteria and the door surround are all most notable.
The detailing of the porch is of interest, although the structure itself does not enhance the orignal facade of the building. In contrast, the side walls are unadorned, random coursed rubble. The interior of the building and the entire structure remains intact. The building is a rare surviving example and a particularly fine example of the non-conformist religious buildings which were erected mostly in England during the first half of the 19th century and of which very few examples survive in Australia. The basic form of this building reflects traditional Georgian design, whilst the detailing of the parapet pediment and the classical motifs such as the wreaths and acroteria all are reminiscent of the Greek Revival movement of the early 1800s. The Methodist Church is a landmark in Port Fairy and is one of Port Fairy's finest buildings.
Classified: 'Local' 12/05/1958
Revised: 03/08/1988
Part of Port Fairy Historic Area Classified: 02/03/1981.