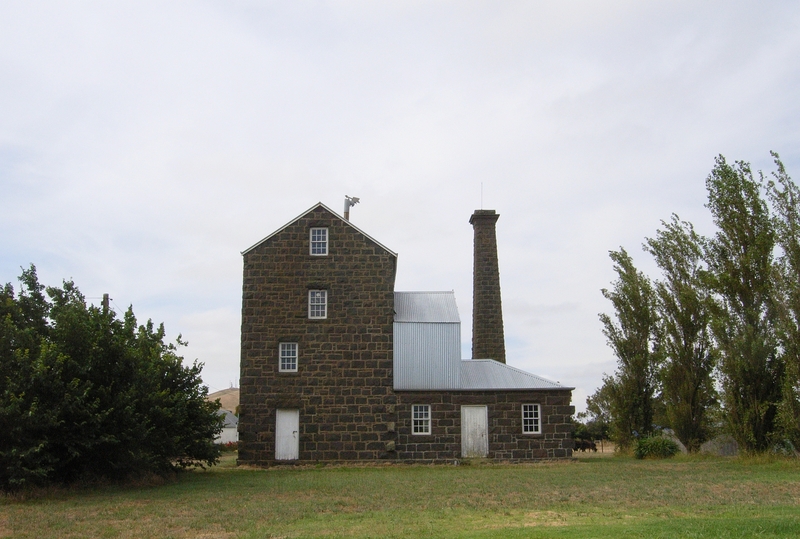 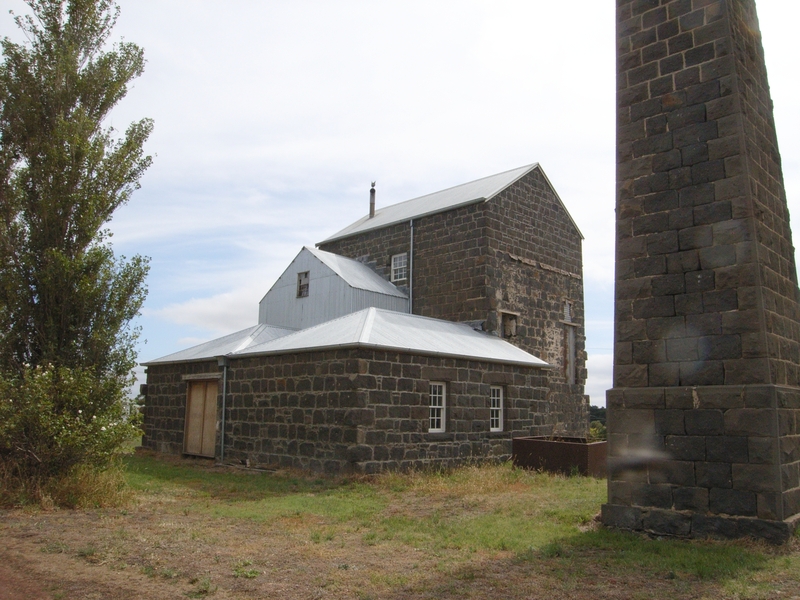 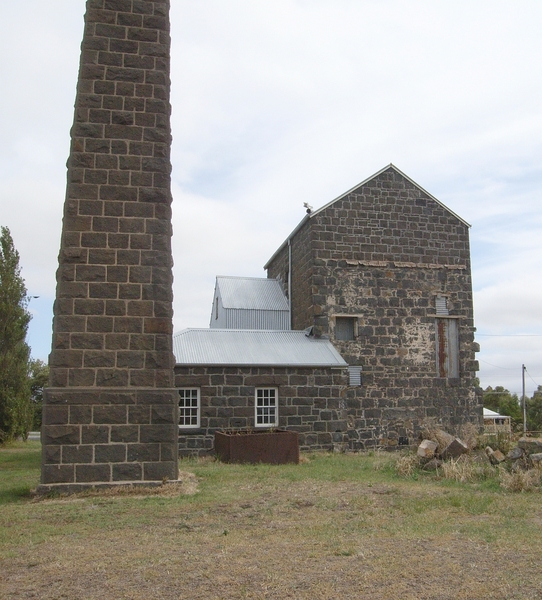 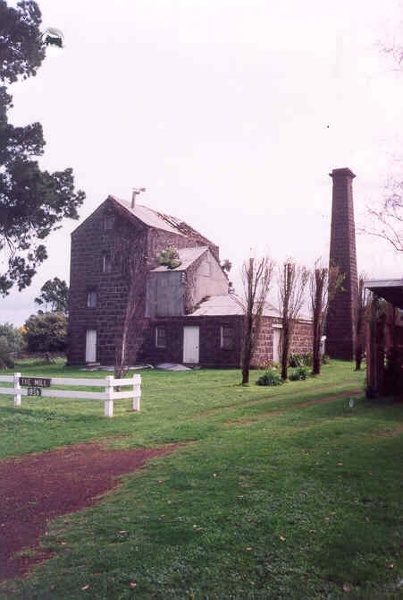 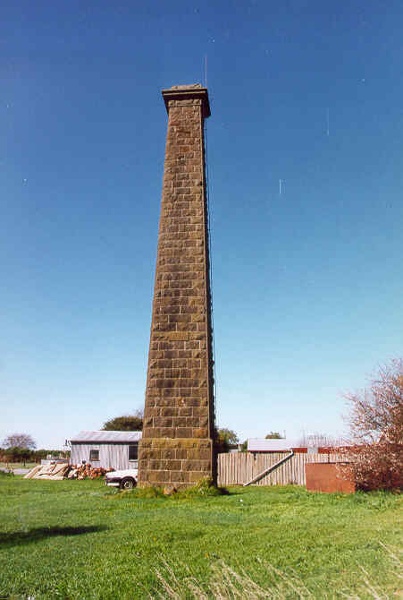 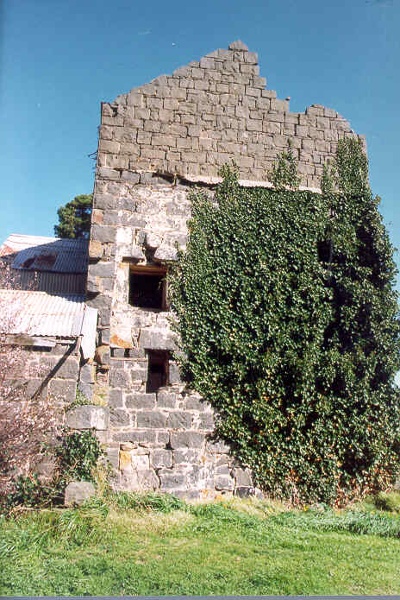 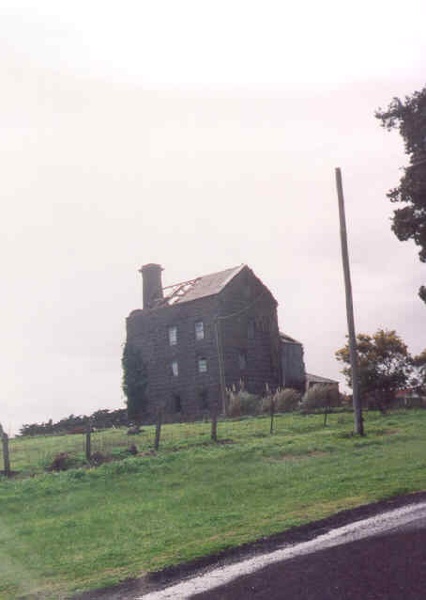 A windmill erected in Mortlake c1857 was the first structure built for the Mount Shadwell Mill. From 1859 a steam mill was operated on the fourteen acre site by the firm of Aikman, Hamilton and Geddes. The extant bluestone mill building was probably built at this time and the bluestone chimney soon after this date. The mill was operated by Aikman and Geddes from 1870, with Aikman becoming the sole owner in 1880. The site then remained in the ownership of the Aikman family for another seventy years.

Milling slowed after wheat growing moved north in the 1870s and, together with the concurrent introduction of roller milling technology, the construction of flour mills was affected, with some mills expanding or converting to the new technology. Those of the south west generally did not respond in this way and the Mortlake Mill typically retained its stone grinding method of milling. From the 1870s the flour milling section of the Mortlake Mill business declined, however milling of various kinds, mostly for feed, was undertaken and reportedly continued sporadically until the 1940s. From the 1860s other businesses were also conducted from the Mortlake Mill, including the selling of building materials.

In c1956 a subdivision by the Soldier Settlement Commission reduced the size of the Mortlake Mill site. In 1996 the Mill site passed into community ownership.

The existing bluestone complex includes a main mill building and adjoining annexe, and a chimney. A number of outbuildings constructed on the site have since been removed, including a two storey bluestone annexe to the north of the mill building. Engine mountings, a well and a wrought iron tank from the early period of the steam mill, remain. Although all the machinery has been removed from the mill building, there is a considerable amount of remaining evidence of the original stone milling process still in place. Two bluestone cottages associated with the mill and built in the 1860s remain on another site.

Mortlake Mill is of historical and architectural significance to the State of Victoria.

Mortlake Mill is of historical significance due to its association with the important and early phase of flour milling technology based on stone grinding. This method of milling was employed from the establishment of the colony to the 1870s, when roller milling technology became common. Sufficient intact fabric exists to demonstrate the process and working conditions of the industry in this period. It is one of the most intact mills in terms of the retention of evidence of the milling process and is a typical mill type of this era.

Mortlake Mill is of historical significance due to its association with the important development of the wheat industry in south western Victoria. From the late 1850s to the early 1870s, this was a major wheat producing area in the State and the establishment of such small mills, close to the source of supply, is illustrative of the industry which developed. Mortlake Mill is the most intact of the flourmills built in the region during this period.

Mortlake Mill is of historical significance as part of a precinct of substantial bluestone buildings built in the town, which demonstrate the growth of the township in the second half of the nineteenth century.

The Mortlake Mill chimney is of architectural significance as a carefully detailed, finely finished and well proportioned example of a nineteenth century industrial chimney. It is one of the few chimneys remaining from a mid nineteenth century flourmill, particularly of bluestone construction.