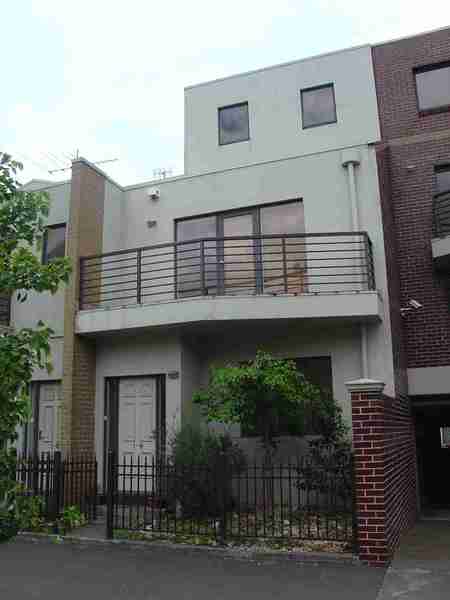 The Victoria Park Heritage Overlay Area includes parts of Crown Portions 78, 79 and 88, which had been surveyed by Robert Hoddle and sold in 1839 to R Dacre, J D L Campbell (a pastoralist) and J Dight, respectively. John Dight built Yarra House (later the Shelmerdine residence) and mill on his allotment and Campbell built his house, Campbellfield House (later owned by architect and MLA William Pitt as Mikado) on his land overlooking the Yarra River.

In 1878, Edwin Trenerry, a shareholder in a deep lead mining company (136), had a plan of subdivision prepared for all three Crown Portions. The design recalled the earlier Darling Gardens development at Clifton Hill, with Victoria Park intended as an ornamental garden square, surrounded by residential properties with 33' frontages to the park.

By 1879 much of the land had been sold to David Abbott, with some lots sold to James and John Kelly in the next year. By 1885, all the lots had been sold, and development of many of them had begun.

The railway line, linking Melbourne to Clifton Hill, was opened in 1901 following the reclamation by the government of 90 of the estate's house lots, six of which had already been built upon. (137) The western ends of Turner, Truro, Abbott and Maugie Streets, west of the Heritage Overlay Area, are remnants of Trenerry's original subdivision before it was disrupted by the railway. Trenerry's vision of a garden square, as the centrepiece for the Campbellfield House subdivision, failed in one respect but succeeded in another. Instead of creating a landscaped park, the Council established quite a different park, Victoria Park, the long-term home of the Collingwood Football Club. Victoria Park is on the Victorian Heritage Register (refer Victorian Heritage Register Ref H0075).

Collingwood Council purchased Victoria Park from the estate developers for ú2,562 in 1878, for use as a recreational facility. From 1882, Victoria Park was being used as a cricket and football ground by the Capulet Cricket Club and Britannia junior football club, the predecessor of Collingwood Football Club. Collingwood Football Club, now a national sporting icon, was formed in June 1889 and admitted to the Victorian Football Association in 1892. The club developed the site throughout the 20th century.

A cable tram service commenced in Johnston Street in 1887.This, and the railway link of 1901, aided speculative residential development in the area from the 1880s. This included the extensive Winniefred and Dorothy Terraces, built in Lulie Street during 1888 for Theodore Fink in association with William Chidzey, the developer of Dorothy Terrace, Lulie Street (also built 1888).(138) The Abbott Street school, later Victoria Park Primary School, opened in Abbott Street in 1889 (demolished c.1997).

The residential sub-area of contributory elements include (but not exclusively) mainly detached and attached Victorian-era and Edwardian-era mainly one storey houses having typically:

. For the distinctive Trenerry estate design, with Victoria Park as a central residential garden square.

. For the former Collingwood football ground, as the centrepiece of the Heritage Overlay Area, the social focus of the Collingwood and Abbotsford area since the late 1800s, and as a national sporting landmark;

. For the Victorian-era infrastructure such as early street, lane and allotment layouts, together with some original bluestone kerbs and guttering, all providing an appropriate setting for this collection of buildings.

In 1878, Edwin Trenerry, subdivided Crown Portions 78, 79, 88 for residential development, creating the existing street pattern in the Heritage Overlay Area. The central element of the development was to be Victoria Park, an ornamental garden, surrounded by residential properties with 33' frontages to the park.

Trenerry Crescent followed the line of the Yarra River and separated the larger riverside allotments from the smaller residential subdivisions further west. By the turn of the century, the river frontage allotments along Trenerry Crescent were undergoing a transformation from gentlemen's farms to industrial uses. The Melbourne Flour Milling Company operated at the old Dight's Mill site on the Yarra from 1891, at the north end of Trenerry Crescent, with the Shelmerdine's Yarra Hat Works and a quarry located further to the south, both since redeveloped.

The massive Austral Silk and Cotton Mills complex was built at the north end of Trenerry Crescent in 1927 and the Yarra Falls Spinning Mills had also expanded in the area during the early 20th century. Their administrative complex was built in 1919 facing Johnston St and the landmark 1930s Byfas building was built, facing Trenerry Crescent, to produce textiles during World War Two. The combination of these extensive industrial complexes has a strong built character that is evident from within the Heritage Overlay Area and from distant views down the Yarra River and the Eastern Freeway.

In the last two decades of the 20th century, these large industrial and mill buildings have gradually been decommissioned and recycled for light industrial, commercial or residential uses. Some of these developments have been innovatory in the re-use of significant industrial structures, such as Daryl Jackson's award winning design for the Esprit company in the 1980s.

The main development period evident in the Victoria Park Heritage Overlay Area industrial sub-area is that of the inter-war era. There is also a contribution from individually significant places of all eras.

. Some public infrastructure, expressive of the Victorian and Edwardian-eras such as bluestone pitched road paving, crossings, stone kerbs, and channels, and asphalt paved footpaths

. Views to the landmark industrial structures, from within and without the Heritage Overlay Area.

. For the strong cultural connection with the highly significant Dight's Mill complex (adjoining the Heritage Overlay Area) as an early and significant industrial site in the State and the precursor to this long-term riverside industrial domain;

. For the many notable, large inter-war former industrial complexes that remain contributory and individually significant because of skilful adaptation to new uses; and

. For the major aesthetic contribution made by the location of these buildings on the curve of Trenerry Crescent and the Yarra River, particularly from close and middle distant views to the river bank and towering landmark factory buildings, above, that dominate the surrounding low scale residential development.