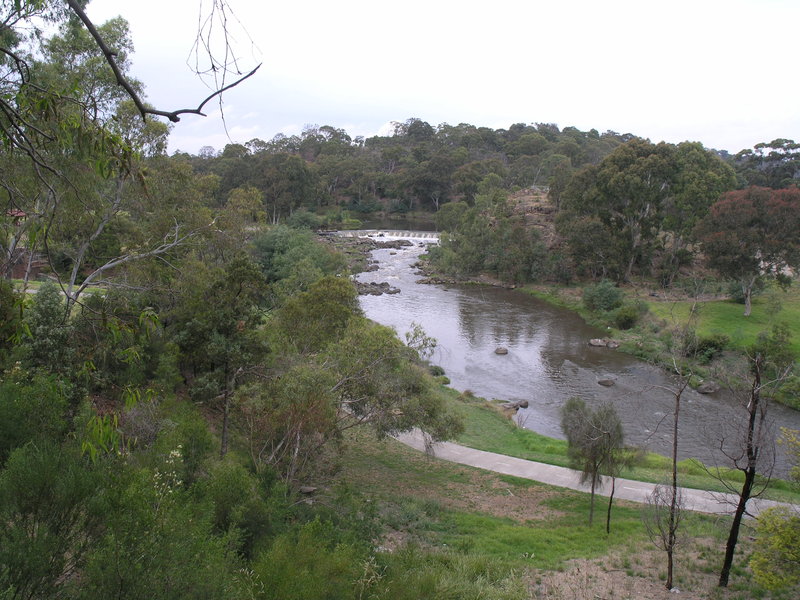 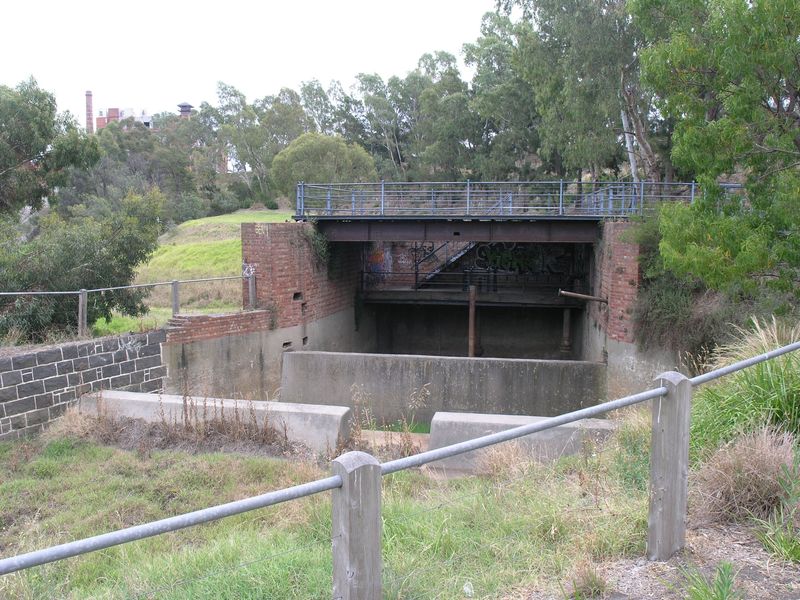 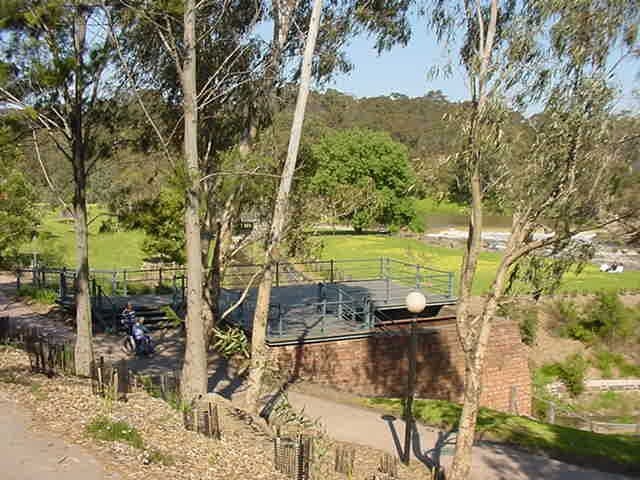 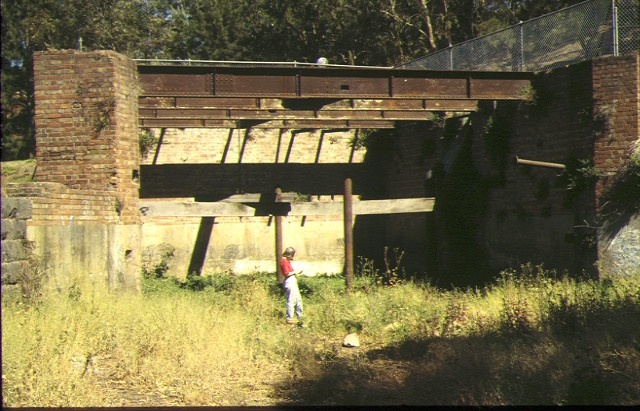 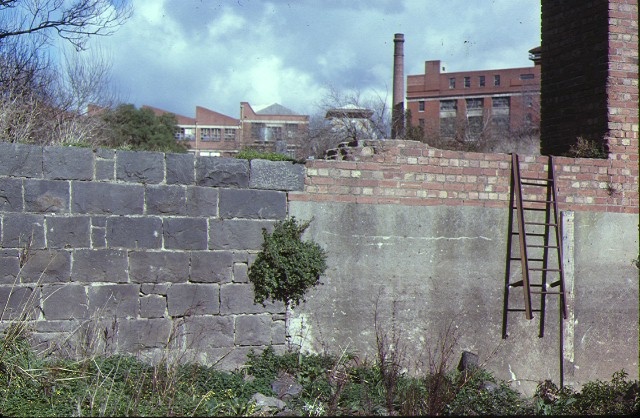 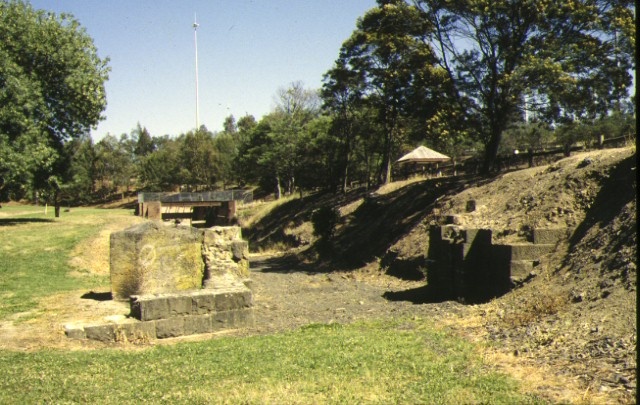 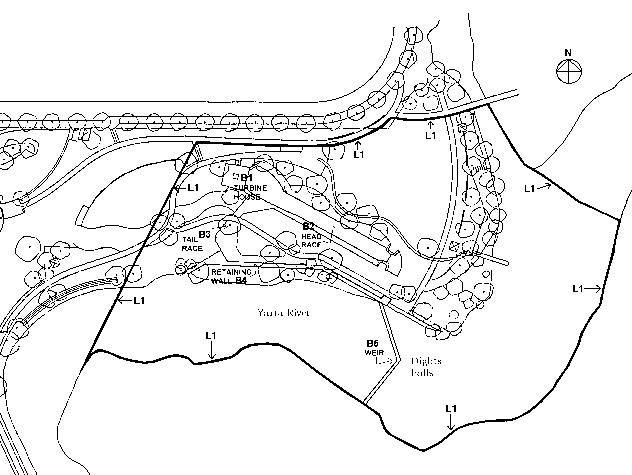 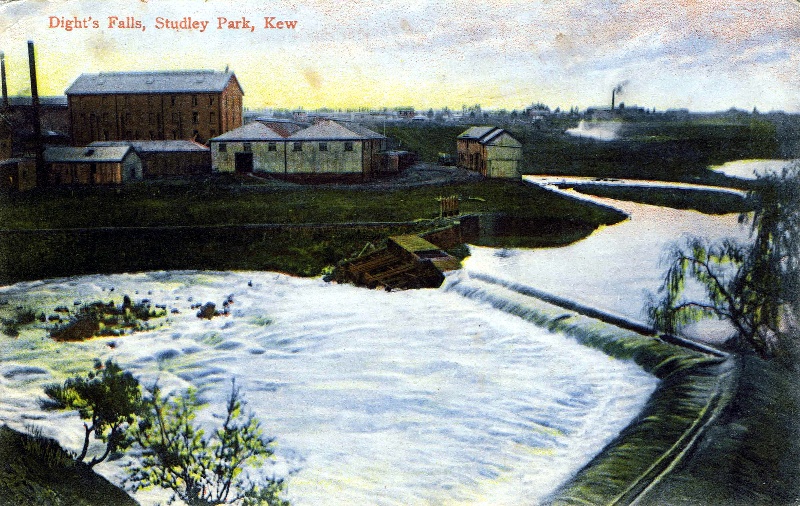 John Dight of Campbell Town acquired portion 88, Parish of Jika Jika, County of Bourke, on 7 November 1838. Over the next few years, he constructed a brick mill on the site and began the production of flour. In November 1843, ownership of the land passed to John Dight and his brother Charles Hilton Dight. In 1864, the flour milling use was abandoned and the mill leased to Thomas Kenny. In the mid 1870s, the site was used by the Patent Safety Blasting Powder Co. The Dight family sold the mill site to Edwin Trennery in 1878 and he subsequently subdivided the land. The original mill on the river bank remained unoccupied until 1888, when flour millers Gillespie, Aitken and Scott, operating under the name of 'Yarra Falls Roller Flour Mills' constructed a new mill and associated buildings on the site. The mill race was rebuilt in much the same position on the site using bluestone blocks from Dight's old mill building, and a new mill and associated buildings were constructed some distance from the site of the original mill building. This enterprise was sold in 1891 to the Melbourne Flour Milling Company, run by the Hon. James Bell. In 1890, the founding Act of the Melbourne and Metropolitan Board of Works was established and the Board issued a licence to the company in 1895 for the construction and maintenance of the weir at the Falls. In 1909 The Melbourne Flour Milling Co sold ?its mill and plant on the banks of the Yarra at Abbotsford to Messrs John Darling and Son, the well known millers and wheat merchants of South Australia. John Darling and Son extended the lease with the Board of Works, but for a period of only three months. Within this time, however the mill suffered a disastrous fire and was destroyed. Most of what remained of the mill buildings was dismantled and removed from the site in the twenty years following the fire. The Melbourne and Metropolitan Board of Works has controlled and owned the site for most of the twentieth century. The site consists of the remains of the head race, tail race, turbine house, retaining wall and weir.

Dights Mill Site is of social, historical, archaeological, scientific and technical significance to the State of Victoria.

Dights Mill Site is of historical significance as one of the earliest industrial archaeological sites in the state. While altered, the immediate site still reflects the character of the place as it was when a mill was first constructed. Remnants of other water driven flour mills exist elsewhere in the state, however these are the only substantial remains in the Melbourne metropolitan area. The site is of major significance to the flour milling history of the state as it is believed to be the earliest surviving mill site in the state which has not been substantially built over or altered and has been associated with several prominent milling firms and families. The turbines at the Dights mill site represent one of the few surviving examples of a nineteenth century industrial prime mover that survives in situ anywhere in Victoria. The Weir although partially rebuilt in 1941 is of historical importance as it indicates the position of the original weir and the role it played in diverting the river to the turbine house. Built to help control the Yarra, its presence demonstrates the importance of the Yarra River in the role of the mill. The site illustrates the importance of the Yarra River to the development of European settlement and industrial development in Melbourne. Dights Mill Site is of social significance as a landmark in the city of Melbourne and a popular recreation area since the 1860s.

The former Yarra Falls Roller Mill turbine house and its associated mill race and water turbines are of historical and technical significance to Victoria as the most intact installation of its age and type. Historically, the Yarra Falls Roller Mill was the largest capacity flour-mill in Victoria at the time of its construction. At the time of its installation in 1888, the turbines represented the largest capacity water-power system in Victoria, and were even more remarkable in their lack of any alternative back-up power system. The two 'New American' mixed flow turbines installed at this site are the earliest recorded instance of the use of this type of turbine in Victoria. They demonstrate remarkable evidence of rapid technology transfer given that this type of design was only developed in the United States in 1884, some four years earlier. Although designed primarily as a direct-drive mechanical system to operate roller flour-milling machinery, the turbines were also coupled to two small electric-lighting dynamos, making them technically the first hydro-electric plant to operate in Victoria.