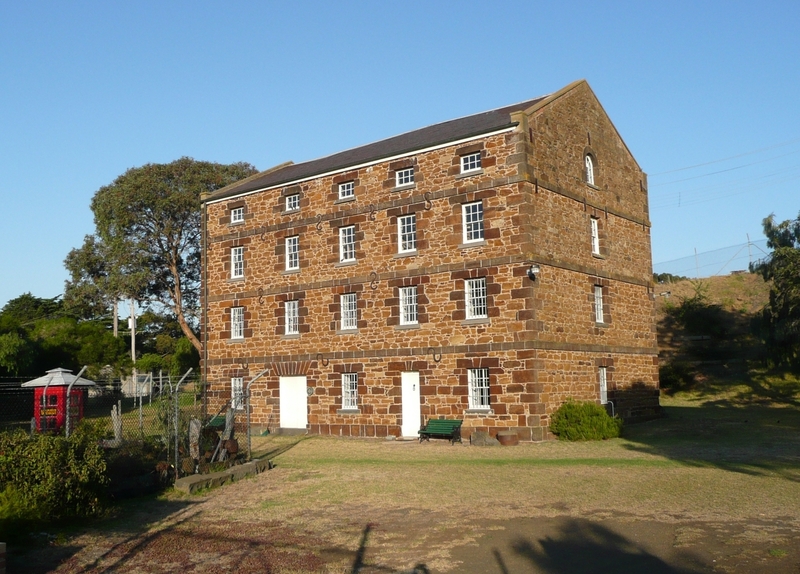 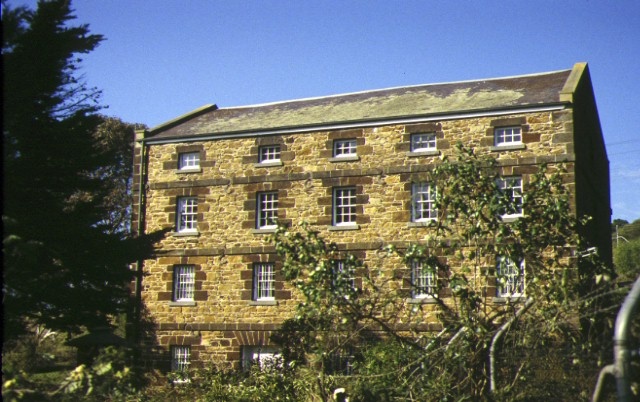 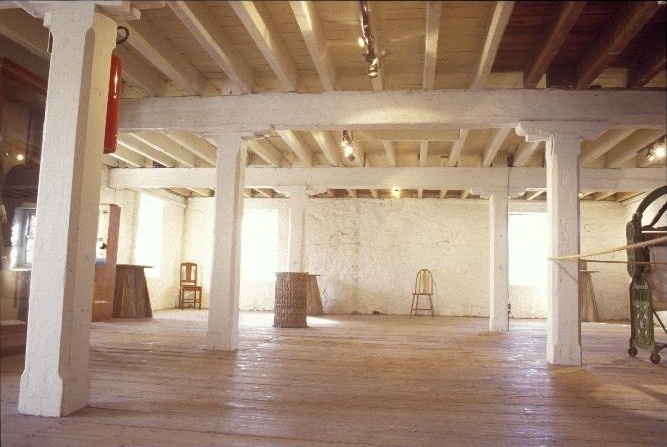 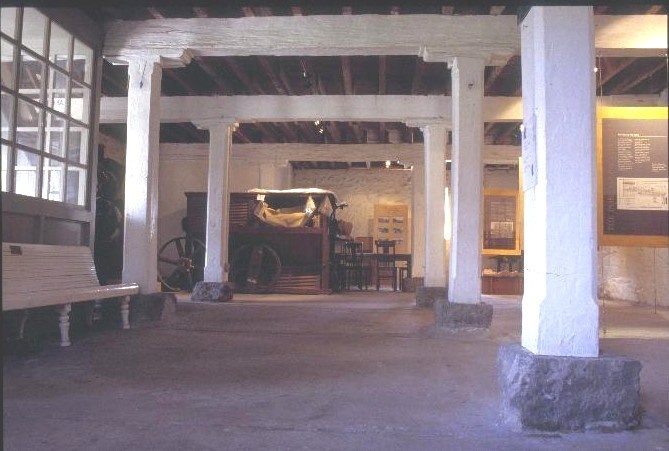 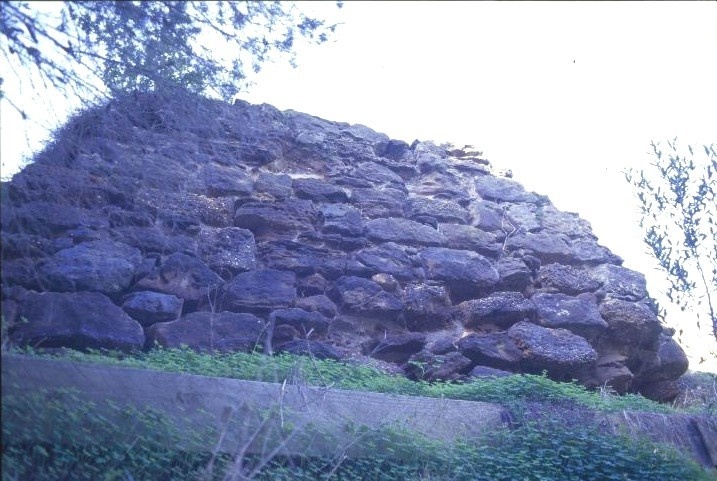 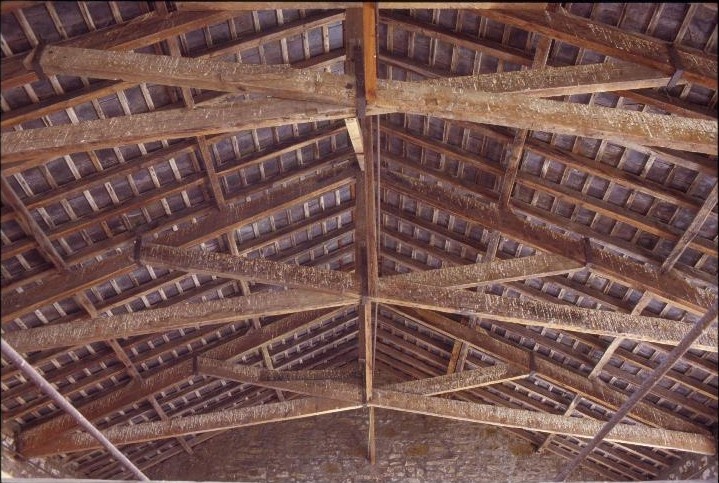 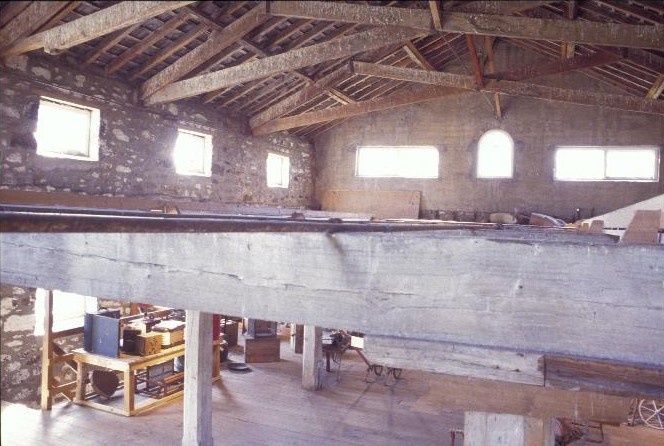 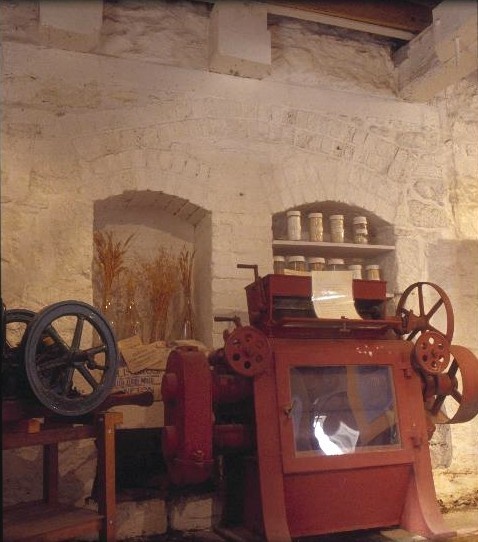 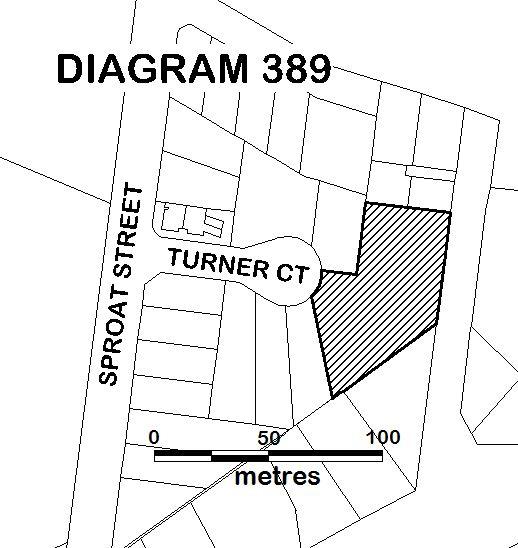 What is Significant?
The Portarlington Mill, 7 Turner Court, consists of a former four storey flour mill building and some adjacent boiler house remnants. The Mill building was initially constructed for the Portarlington Steam Flour Mill Company in 1856, and opened for business in 1857. The former Mill building is a conventional, industrial Victorian Georgian design, and has coursed rubble sandstone external walls with contrasting quoins and stringcourses at each floor level. It is of a gabled form with a slate roof. There are timber windows on all four walls, most of which have been reconstructed. The top of the north gable appears to have been rebuilt or repaired as the stonework has been replaced with rubble concrete. The internal framing of the building is of timber, with the substantial exposed beams and scissor trusses from a large stand of blue gums at Swan Bay (now extinct). The interior is typically utilitarian with exposed timber structural frame, stone walls and an early concrete ground floor. There are also two timber upper floor levels, while the timber floor for the third floor has been removed. Overall, the former mill building is in very good condition and is largely intact, although some internal alterations were carried out in the 1960s when the building was converted into residential flats. There is also evidence of the earlier boiler house at the rear of the former mill building (which originally comprised an L-form layout). The boiler house was demolished after the closure of the mill in 1874, during the period when the building was used for other industrial purposes between the 1870s and the 1960s.

How is it significant?
The Portarlington Mill is historically, architecturally and scientifically significant to the State of Victoria.

Why is it significant?
The Portarlington Mill site is historically significant for its initial associations with the local Koori people as a camping ground, and as one of the oldest surviving building examples constructed for steam power milling operations in the mid 19th century. It may have been constructed by T.H. Widdicombe in 1856 using local sandstone from the nearby Buckley's Cliff. The design of the building was by the Geelong architect and surveyor, Andrew McWilliams. In addition to the mill structure, there were also constructed a substantial stone house, large storeroom, four weatherboard cottages, and a boiler house with towering chimney stack, however all of these structures have subsequently been demolished. With the closure of the mill in 1874 (due to the opening up of the rich wheatlands of Horsham), the building served a number of industrial uses during the next 90 years. It was first occupied by the builder, T.H. Widdicombe and used as brick storage, and it was later a factory for making furniture upholstery stuffing from dried seaweed, and as a factory for printing ink and artificial fertilizer production. In the 1960s, the Mill was converted into residential flats, and in 1971 it was sold to the former Shire of Bellarine and given to the National Trust of Australia (Victoria). From this time, the building has accommodated a folk museum which is open to the public.

The Portarlington Mill is architecturally and scientifically significant as one of the rare known examples of conventional, industrial Victorian Georgian mill design in Victoria. The original design qualities of the building, notably the simple gable roof form, coursed sandstone construction and the rudimentary internal timber structural members also have an affinity with the 17th and 19th century mill designs in Britain, such as the extant Preston Mill, East Lothian, England. The building remnants representing the boiler house also provide a strong presumption of archaeological research potential, and contribute to a wider appreciation of the 1850s steam flour mill complex at Portarlington.