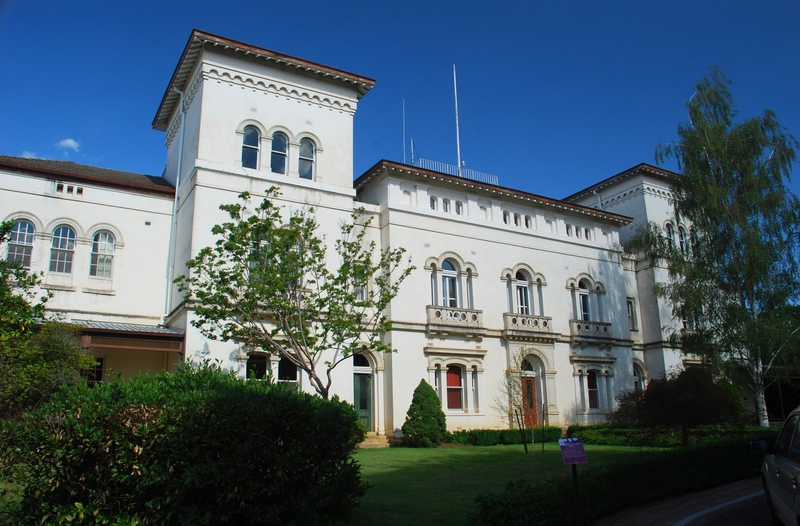 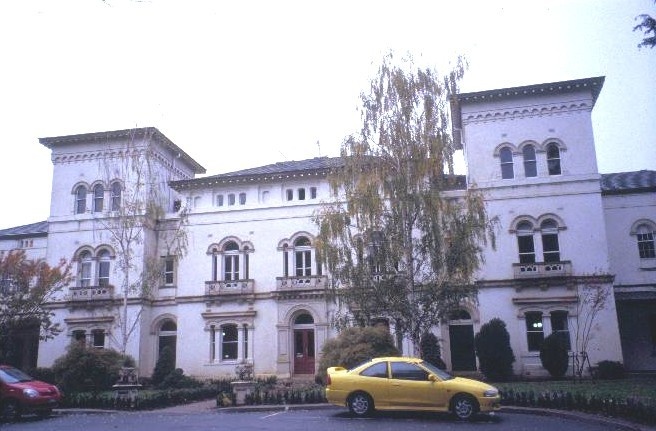 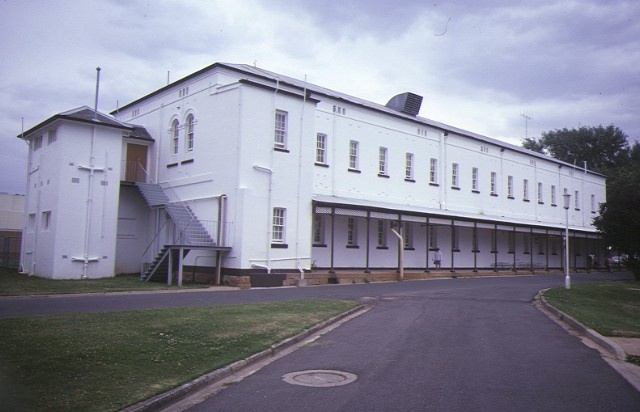 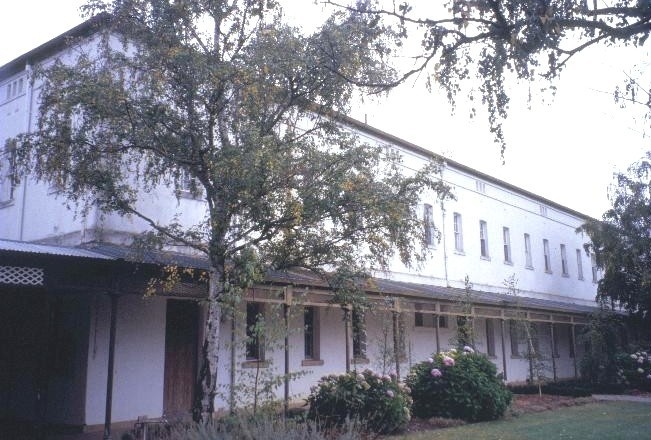 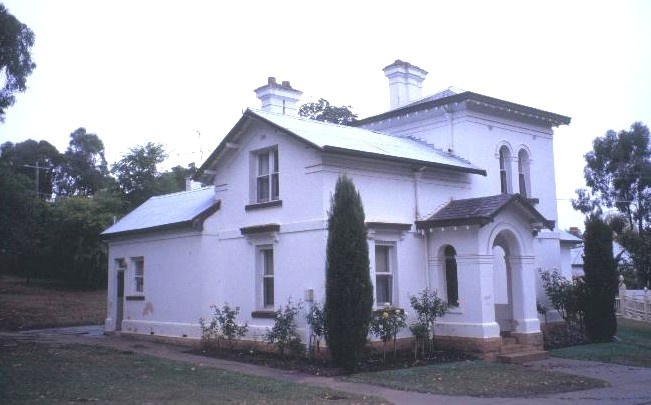 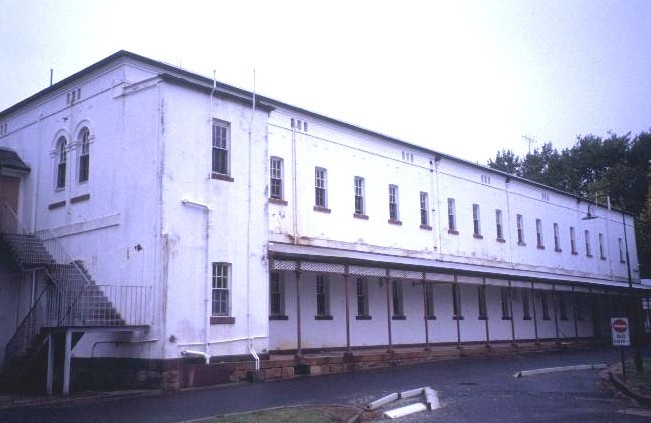 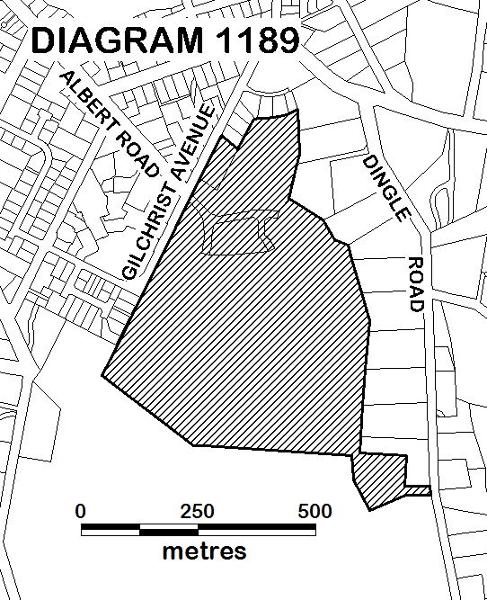 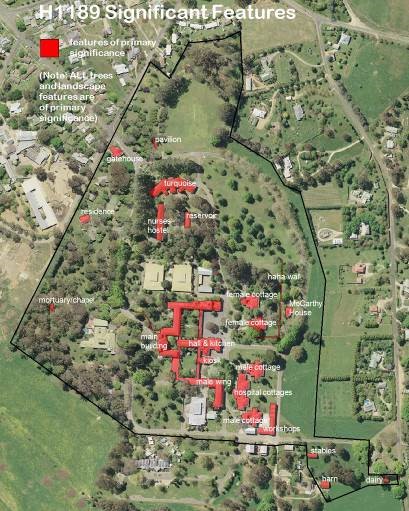 Mayday Hills Hospital, consisting of a variety of buildings constructed since the establishment of the institution in 1864. The majority of these buildings are contained within a landscape setting which includes part of original brick walls and associated ha-ha. A small group of farm buildings, including a cob building, are located to the south-east of the site. History Summary The Mayday Hills Hospital was constructed as the Beechworth Lunatic Asylum between 1864 and 1867 to designs by the Public Works Department (PWD). Together with asylums at Kew and Ararat, the design of the asylum was based on administrative, planning and medical principles developed in Britain. The original asylum building was contained within a fenced compound, with ha-ha, and the grounds were developed to create an attractive and functional landscape. Active work was considered imperative for patients and workshops were located near the male accommodation and laundries and drying yards near the female accommodation. Farm land located south of the compound also provided patients with productive work. Extensive additions were made to the main building in 1873 and detached cottages with enclosed courtyards were constructed in the late 1880s. In the post-war era the treatment of the mentally ill underwent radical change and many buildings were added to the hospital and earlier buildings were modernised. Mayday Hills Hospital closed in 1995, and the complex was sold to La Trobe University, with various community and commercial organisations occupying parts of the site. The university campus was closed in 2011 and the site sold to a private owner. Description Summary The Mayday Hills Hospital site comprises buildings constructed in a number of periods: the initial construction phase (1864-79); subsequent expansion (1880-90); modernisation, including a nurses' hostel and ward by PWD architect Percy Everett (1921-50); later development (1951-95) and the period of occupation by La Trobe University (1996-2012). The first phase included a large E-shaped cement rendered building, designed in an Italianate style with corner towers, and a separate morgue constructed to the west in 1868. The main building contained accommodation, administration, laundry, kitchens, stores and a recreation hall. This and later buildings are set within what is now an extensive parkland containing mature exotic and native trees. Parts of the original surrounding wall and ha-ha and one of two entrance lodges remain on the site. Farm land associated with the asylum contains stables (1873), a barn and a small building of earth construction. This site is part of the traditional land of the Kulin Nation.

Mayday Hills Hospital is significant at the State level for the following reasons: Mayday Hills Hospital is historically significant for its physical manifestation of the changing approaches to the treatment of mental illness in Victoria from institutional confinement to treatment and rehabilitation. The asylum at Beechworth was a key component in a larger system of nineteenth century state asylums in Victoria which included those at Kew and Ararat. [Criterion A] The cob farm building at Mayday Hills Hospital is a rare surviving example of cob construction in Victoria. It is one of few known surviving examples in Victoria. [Criterion B] Mayday Hills Hospital is architecturally significant as a particularly fine example of an extensive complex of Italianate asylum buildings dating from the 1860s, and in the case of the cottages, the 1880s. The design is based on an influential asylum at Colney Hatch in England and, in common with other contemporary institutions notably Willsmere in Kew and Aradale at Ararat, displays key characteristic features such as the E shaped plan of the main administration, kitchen and dormitory block with its airing courts and covered walkways, as well as the gatehouse, mortuary and ha-ha wall. The design of the 1860s buildings has been attributed to Public Works Department architect, J J Clark. [Criterion D] Mayday Hills Hospital is aesthetically important for the beauty of its picturesque setting on a prominent hill among extensive parklands, which comprises native and introduced trees and shrubs. The curved drive with its avenue of large oaks is particularly noteworthy. [Criterion E] The cob farm building at Mayday Hills Hospital is technically significant for the unusual use of cob construction for a small farm building on the site. Double roof construction was used with the inner walls constructed of earth. The technique uses puddled clay, mixed with straw and water, which is laid in courses in a plastic state, without formwork, and pared down once dry. [Criterion F]
Show more
Show less
All information on this page is maintained by Heritage Victoria. Click below for their website and contact details.