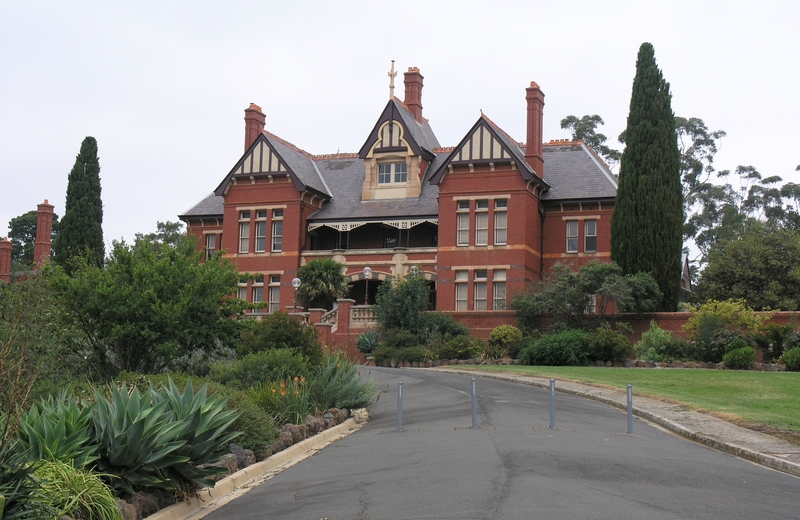 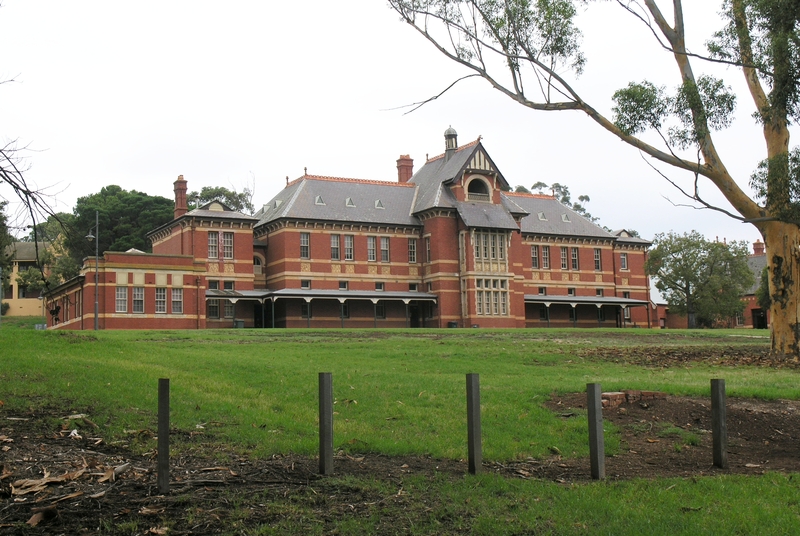 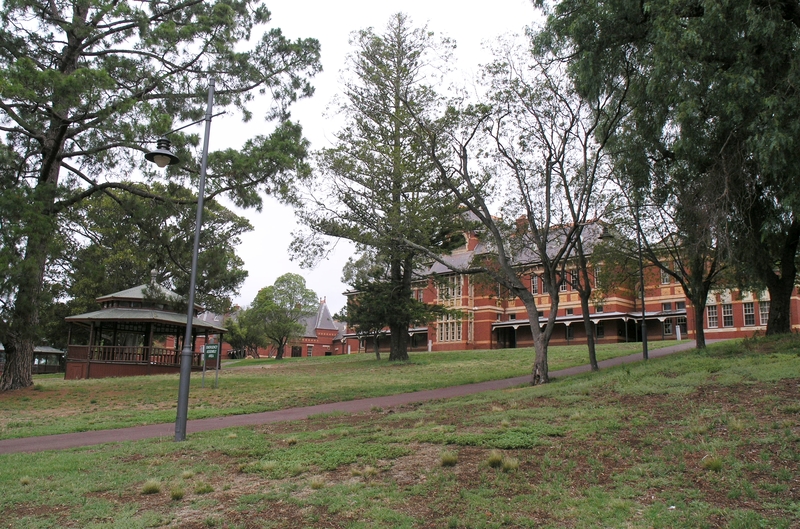 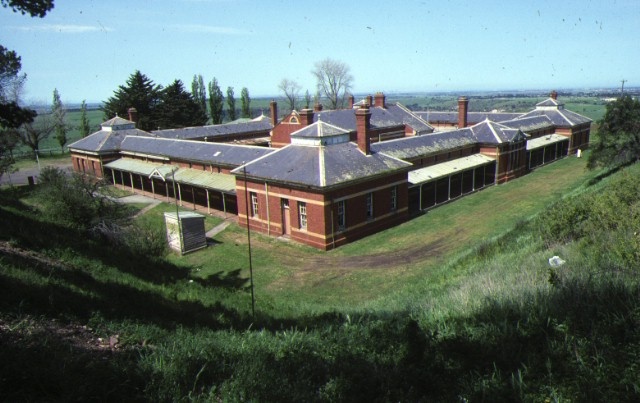 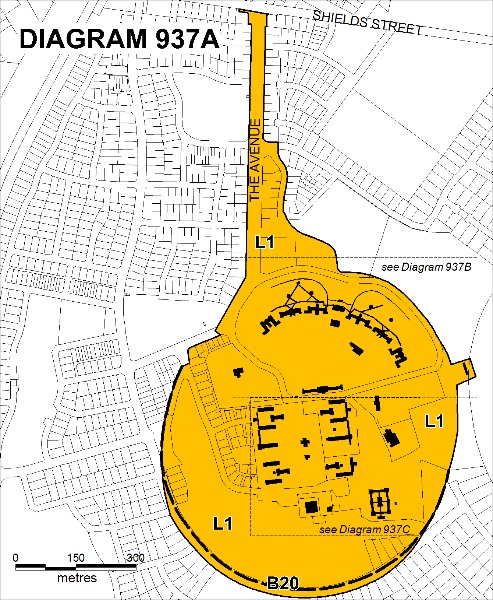 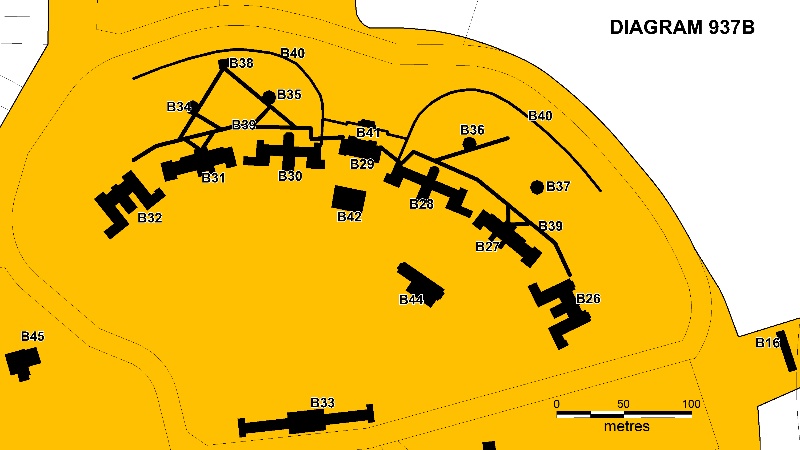 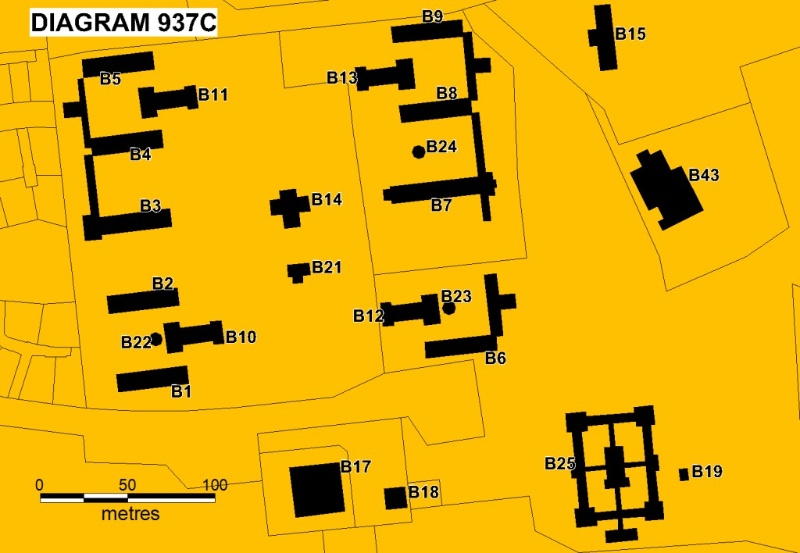 Caloola, Sunbury consists of buildings set in extensive grounds with plantings of mature trees and remnant farmland. Caloola commenced in 1864 as an Industrial School, was redeveloped in 1879 as a Lunatic Asylum, substantially enlarged in the period 1891 to 1914 and was maintained in use as a psychiatric hospital (1879-1968) and later a training centre for the intellectually disabled (1962-1992). Part of the site became a Victoria University campus from 1994 to 2011 and the remainder is in use by the Department of Education.

The Industrial School consisted of ten basalt buildings (nine extant), designed under the direction of Public Works Department Inspector General William Wardell and constructed in 1865-66, four workrooms, kitchen, hospital, basalt farm building, road and stone wall remnants which were used to house and train neglected children in the 1860s. Boys in the Sunbury Industrial School worked on the farm and in the tailoring and shoe-making workshops to maintain themselves whilst in the institution and were given some basic education. Major alterations were undertaken to the earlier basalt wards in the period 1908-12 when the buildings were linked.

The Industrial School at Sunbury is believed to be the earliest surviving example in Victoria; of the original twelve industrial schools: only one other, constructed in 1875-76, survives at North West Hospital, Parkville.

The purpose built Sunbury Lunatic Asylum, constructed mainly between 1892 and 1912, was designed and constructed mainly under the direction of the Chief Architect of the Victorian Public Works Department, George Watson. A site plan was prepared by the talented architect Henry Bastow in 1888. Its pavilion wards in brick with terra cotta roofing tiles conformed to international standards of asylum and hospital planning adopted in the later nineteenth century and were a departure from the single monolithic buildings constructed at Kew and Beechworth. Electric lighting was installed in the wards in 1905-6. A tramway was laid linking the rear of the wards with the kitchen (built 1906-7) in 1908. Telephone and fire alarm systems were installed to connect the 20 separate buildings of the asylum in 1911.

Caloola is of historical, architectural, aesthetic, archaeological and social significance to the State of Victoria.

The Caloola complex is of historical significance for its demonstration of attitudes to child welfare and mental health in its early industrial school buildings and asylum buildings, airing courts and gardens. .

Caloola is of historical significance for its typical asylum landscaping and site planning, its airing courts (many of which retain early sunshades and privies) and a complete example of a sunken wall (or ha ha wall). Asylums were typically distant from population centres, with extensive grounds and ha ha walls to prevent escape.

Caloola is historically significant for its purpose built Sunbury Lunatic Asylum, constructed between 1892 and 1912. Caloola's large and architecturally impressive buildings in a curved detached pavilion arrangement demonstrate changes in the accommodation and treatment of mentally ill patients in the nineteenth century. The clear evidence of farming operations also demonstrates the policy of employing boys in industrial schools to train them in farm work and the later policy of involving physically able mentally ill patients in outdoor work.

Caloola is of historical significance for its physical fabric and spaces which demonstrate nineteenth century attitudes to the treatment of mental illness, including the padded cells, ripple iron cells and dormitory accommodation. The female refractory ward, originally designed for male criminally insane patients, demonstrates contemporary practices in dealing with female patients who were transferred from the general wards for disruptive behaviour.

The Caloola complex is of historical significance for their association with the talented Public Works Department architects from the 1860s, and particularly associated with Henry Bastow and Chief Architect George Watson, who were responsible for the design of the pavilion buildings from the 1890s to 1912. Its association with noted landscape designer, Hugh Linaker, who was responsible for the grounds from 1912, is also significant.

The Caloola site is of archaeological significance for its potential to contain historical archaeological features, deposits and relics that relate to the construction and use of the Industrial School and the Lunatic Asylum.

Caloola is of architectural significance for its institutional buildings of the 1860s and the 1890s. Its industrial school buildings of the 1860s are typical of the Public Works Department output of the 1860s, use local material, have simple classically derived detailing and gain much of their importance by the repetition of forms. Major alterations were undertaken to the earlier basalt wards in the period 1908-12 when the buildings were linked. The planning of these links is accomplished and contributed to the continuity of use of the site and represented changing attitudes to mental health.

The site at Sunbury is architecturally significant for its rare and intact examples of an industrial school and a late nineteenth century lunatic asylum. The site contains rare examples of hairpin fencing used to enclose airing courts for patients. Outdoor shelters or sunshades for patients are also uncommon in Victoria.

The Caloola complex is of architectural significance for its industrial school and asylum buildings. The earliest of the remaining buildings of the Sunbury Industrial School are architecturally significant as forming the earliest purpose built example of its type,. They are important for their bluestone construction and austere style which distinguished them from the later asylum buildings. The 1860s buildings which exhibit classically derived detailing are constructed of local basalt. The red brick and timber buildings of the principal phase of asylum expansion of 1891 to 1912 are of architectural significance for innovative design as a pavilion hospital grouping and include distinctive detailing.

Caloola is architecturally significant as a former lunatic asylum, one of several surviving in the state. It demonstrates typical characteristics such as formal planning, use of sunken walls (ha ha walls), airing courts and a diverse range of building types to cater for the patient and staff population. They gain their architectural significance from the unity of materials, overall cohesiveness of design, consistent and distinctive detailing (especially in the unusual use of buttresses and steep roofs in the former hospital wards), impressive site planning and spacious setting.

The Caloola complex is of aesthetic significance for the quality and range of its architecture and garden elements, consistent use of basalt, red brick and terra cotta tiles, its consistency of architectural styles and materials within the two major building phases, for its landscape planning and plantings and for its prominent siting on the hill with views to and from the site.

Caloola is of social significance especially to past patients and their families as a reminder of past practices in mental health care.

The Caloola site is on the traditional land of the Wurundjeri people.