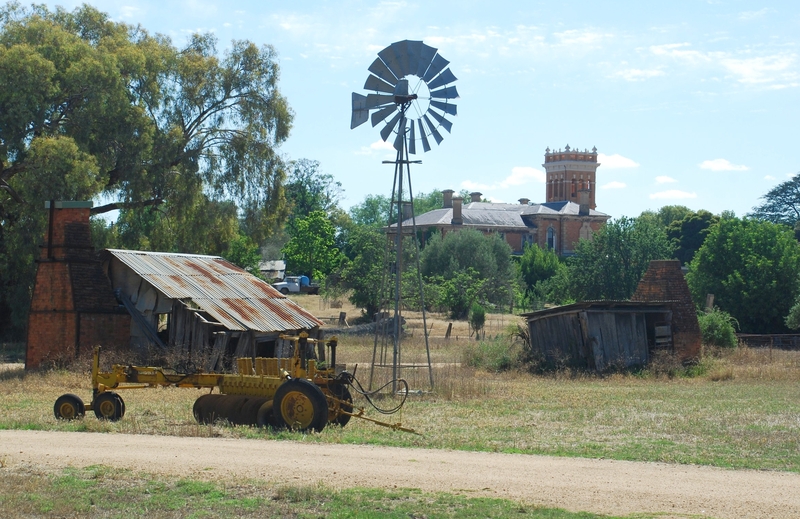 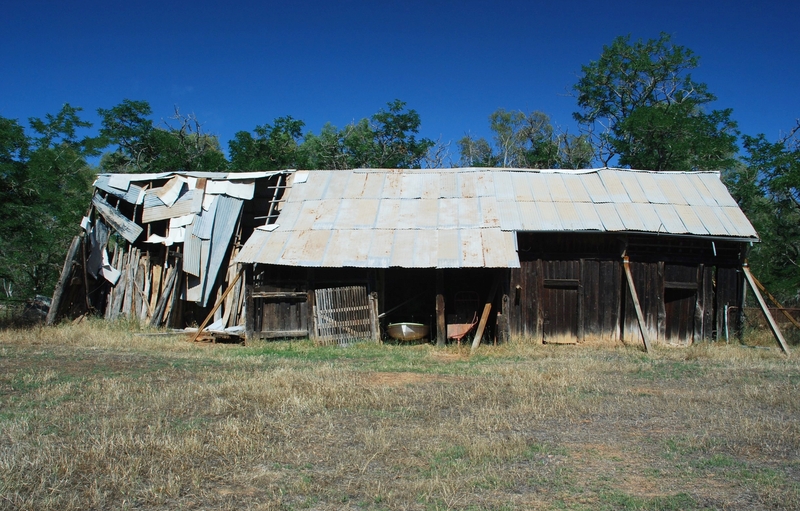 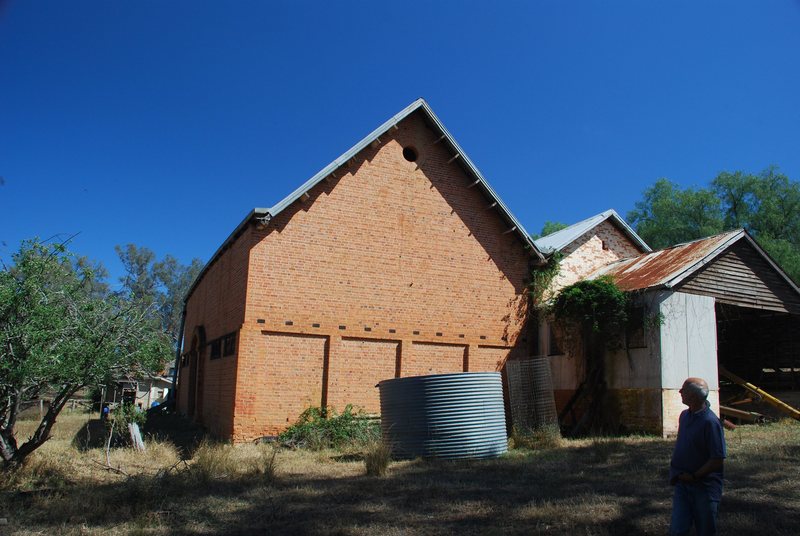 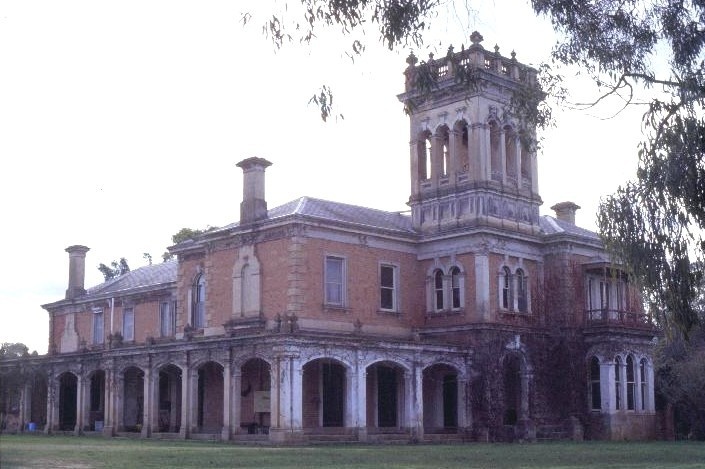 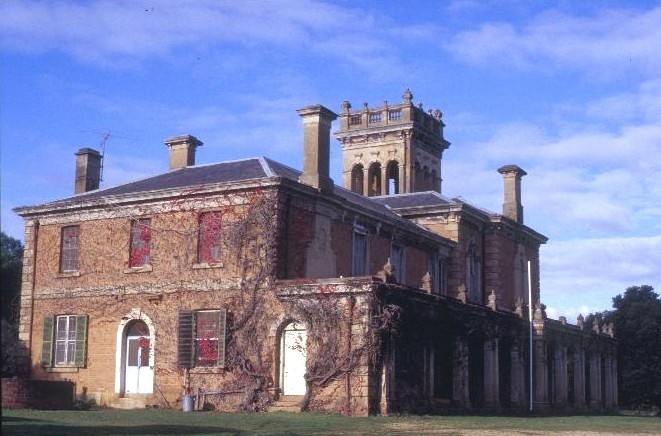 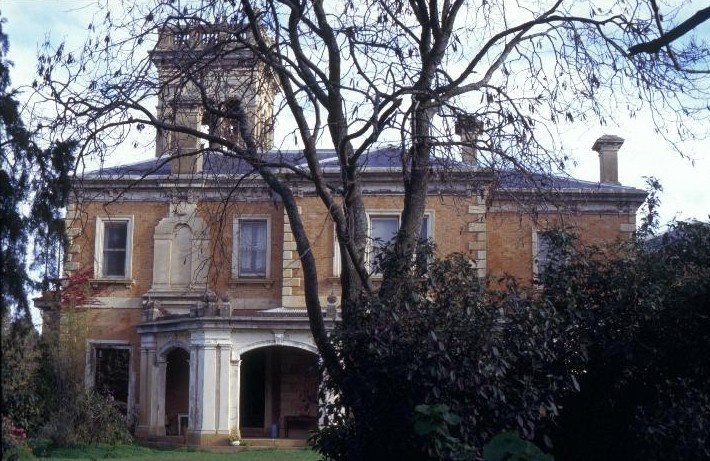 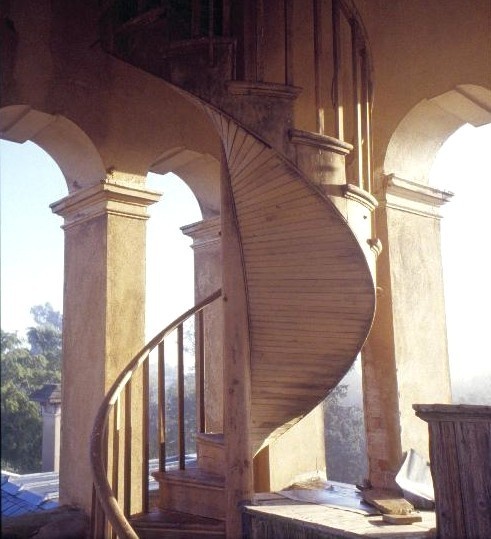 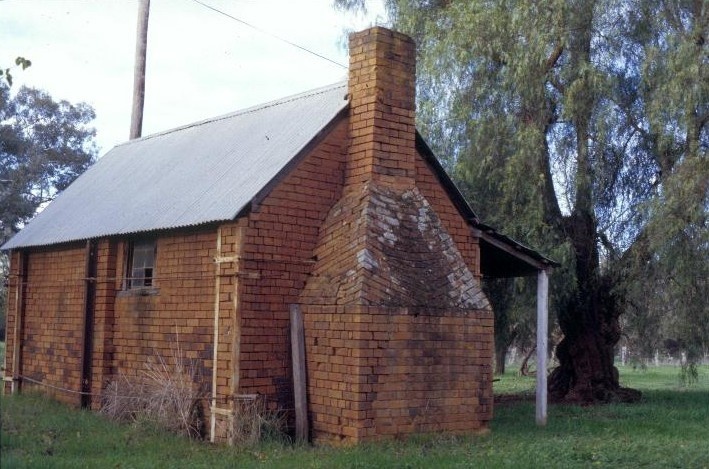 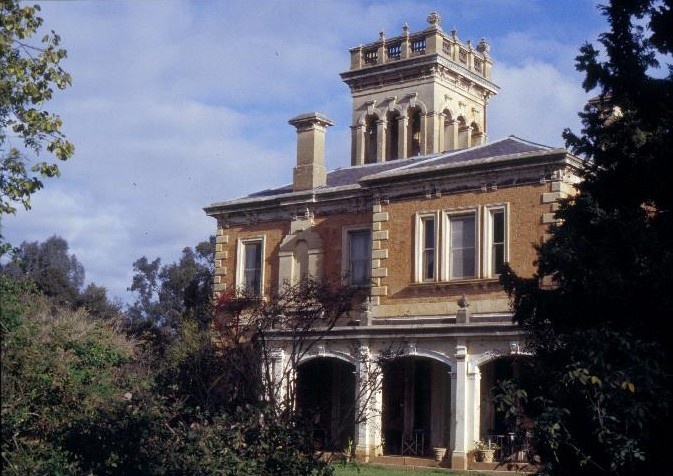 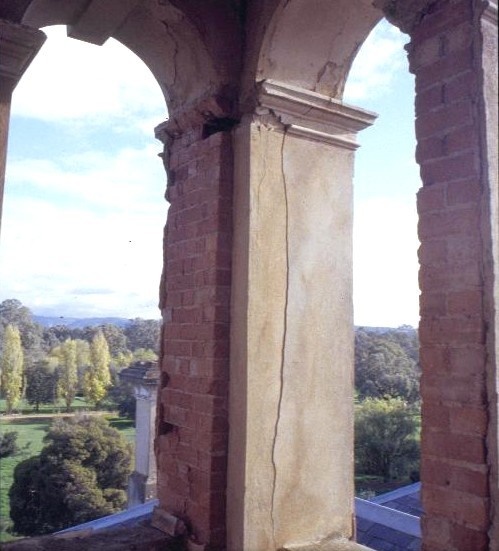 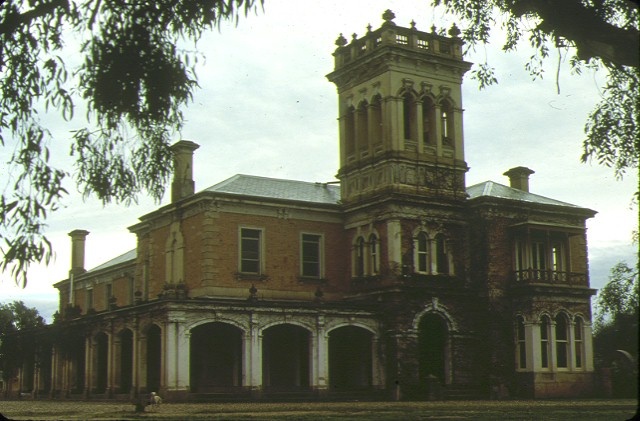 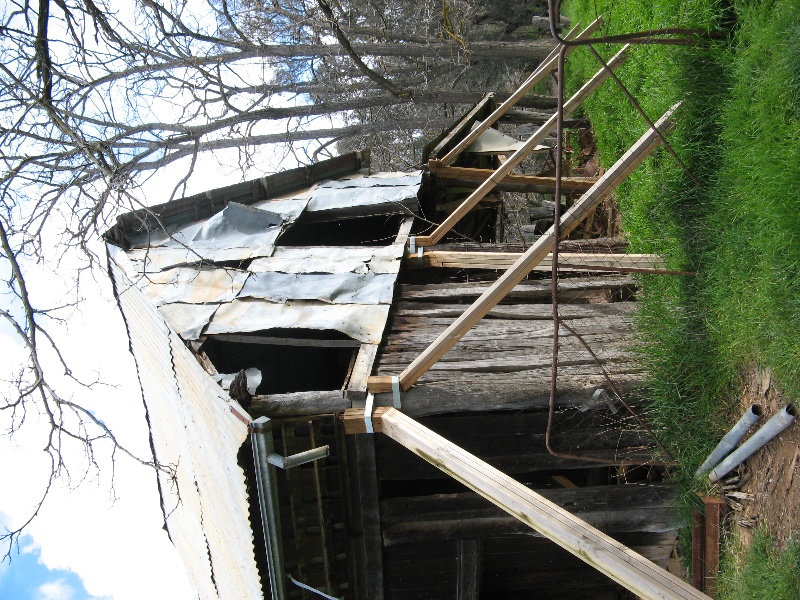 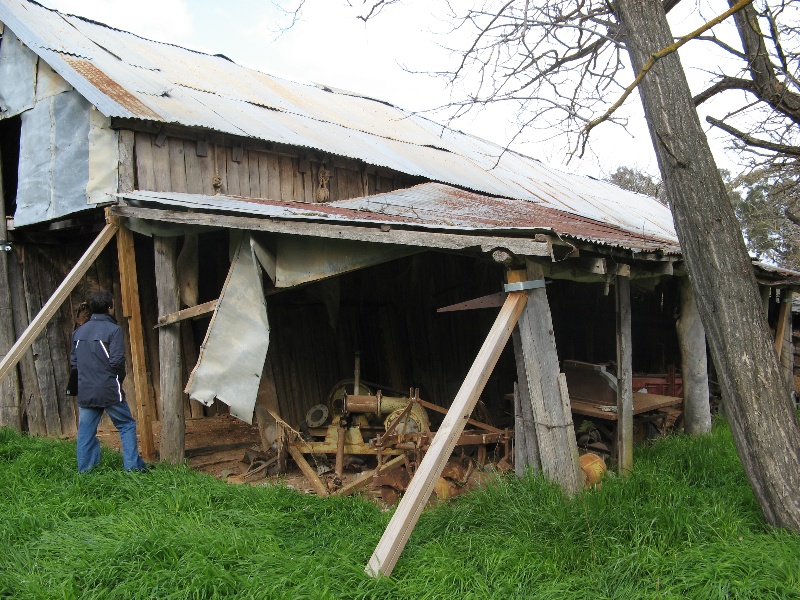 What is significant?
Joseph Docker moved his family to the Wangaratta area in 1838, ten years after his arrival in Australia, and took up the Bontharambo run. He developed this property and built two houses before employing the architect, Thomas Watts, to design the existing Bontharambo homestead. This was constructed in 1857-9, after Docker was granted his pre-emptive right in 1855. Much of the surrounding landscape was developed into parkland at this time, and various agricultural industries were developed on the property, particularly from the 1860s. The property remains in the ownership of the Docker family.

The Bontharambo homestead is a picturesque two storey Italianate brick and stone building, asymmetrical in form with dominant square tower, two single storey, rendered brick loggias and slate hipped roof. Granite quoins articulate corners of the building, and paired consoles support the rendered moulded cornice eaves, which themselves conceal box gutters. The arcaded loggias contain segmental arches and Tuscan pilasters applied to supporting piers. The tower contains the entrance porch at ground level, and the third storey contains an open arcade, with balustraded parapet supported on a bracketed cornice. Internally much of the homestead is intact both in plan form and detail, retaining original polished cedar joinery and a variety of nineteenth century fixtures and fittings and contents, including nineteenth century items of furniture.

The picturesque composition of the house is complemented by the surrounding garden, terrace and landscaped park. The approach to the house is along an extensive drive lined with an avenue of Dutch Elms (Ulumus x hollandica), Kurrajongs (Brachychiton populneus) and other species. The park, entered through an ornate brick and cast iron gateway and Osage Orange (Maclura pomifera) hedge, is notable for its mix of exotic specimens and remnant indigenous trees. Plantings include a pair of towering Bunya Bunya Pines (Araucaria bidwillii), White Cypress Pine (Callitris glaucophylla), Cedars, Kurrajongs, Foxglove Tree (Paulownia), two exceptionally large and rare Bottle Trees (Brachychiton rupestris)and an outstanding Holm Oak (Quercus ilex) near the homestead. Near the Chinese gardener's cottage, west of the homestead, is a large Stone Pine (Pinus pinea) and the remnants of an Osage Orange hedge. Two Olive (Olea europaea subsp.europaea) plantations, on the north and east sides of the park, were used for olive oil production and also provide important wind breaks. A citrus grove and White Mulberry (Morus alba) plantings are indicative of Docker?s experimental agricultural pursuits.

The formal garden to the north of the homestead, is laid out in a half circular parterre, now mostly removed and partly turned into lawn. A focal point is a large, and old, sundial on a concrete pedestal.

A complex of outbuildings remain, including remnants of the second homestead (1843), Chinese gardener's cottage (late 1850s) and stables (1855). These date from the earliest period of European settlement of Victoria and display various building construction techniques and materials, such as timber slab construction, handmade bricks, ironmongery forged on the site and early sheet zinc roofing. In addition to this, a private family cemetery was established by the family on the property in 1843 and this now contains seventeen memorial stones and plantings, including a large outstanding Italian Cypress (Cupressus sempervirens), Laurustinus (Viburnum tinus) hedge inside the picket fence, and Rosemary (Rosmarinus officinalis) hedges amongst the marble headstones.

How is it significant?
Bontharambo, Wangaratta is of historical, architectural, aesthetic and scientific (technological) significance.

Why is it significant?
Bontharambo, Wangaratta is of historical significance as a property established during the early period of European settlement of the Port Phillip District, and its subsequent expansion and development is illustrative of the early phase of pastoral development of the colony. It is a well preserved example of a mid-nineteenth century grazing and agricultural property which retains clear evidence of its evolution. The historic core of the property, comprising the main homestead and its contents, its landscaped setting and the complex of outbuildings and associated farming equipment, provides a complete picture of rural life from the earliest days of colonial settlement until the present.

Bontharambo is of historical significance due to its association with the early pastoralist, Joseph Docker, and is important as one of a small number of nineteenth century properties in Victoria which are still in continuous family ownership. Collections of original furniture and other items contained in the homestead are also of historical significance due to their associations with the Docker family and are illustrative of the nature of rural domestic life in nineteenth century Victoria.

Bontharambo has architectural significance for its homestead, which is one of the most distinctive buildings designed by nineteenth century architect, Thomas Watts, and is an early and sophisticated example of the Italianate style in Victoria. It is probably the first example of a building in this style in Victoria which incorporated a parapeted balustraded tower and segmental arches, both of which became fashionable later in the nineteenth century.

Bontharambo is of aesthetic significance for its landscaped park, which is an early, and unusually grandiose, example of the late eighteenth/early nineteenth century English picturesque traditions in Victoria. It contains some important exotic specimens. The extensive tree-lined approach to the homestead, and the gateway, are also of importance. In addition, the remnant house garden and terrace are important as early examples of Italianate-influenced garden design in Victoria.

Bontharambo is of scientific (technological) significance for its surviving mid-nineteenth century outbuildings and fencing, which demonstrate a variety of vernacular building construction techniques and materials utilised by settlers in the developing colony. These, together with remnant farm machinery, citrus plantings and Olive and White Mulberry groves are also representative of early agricultural industries developed by settlers during the early colonial period.
[Online Data Upgrade Project 2004]

Please note Bontharambo is a private property. There is no public access and limited view from the road.