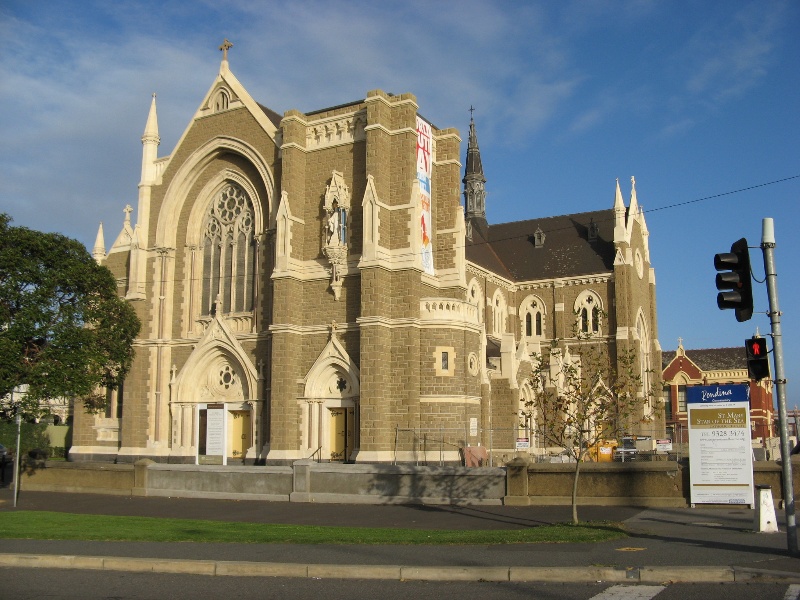 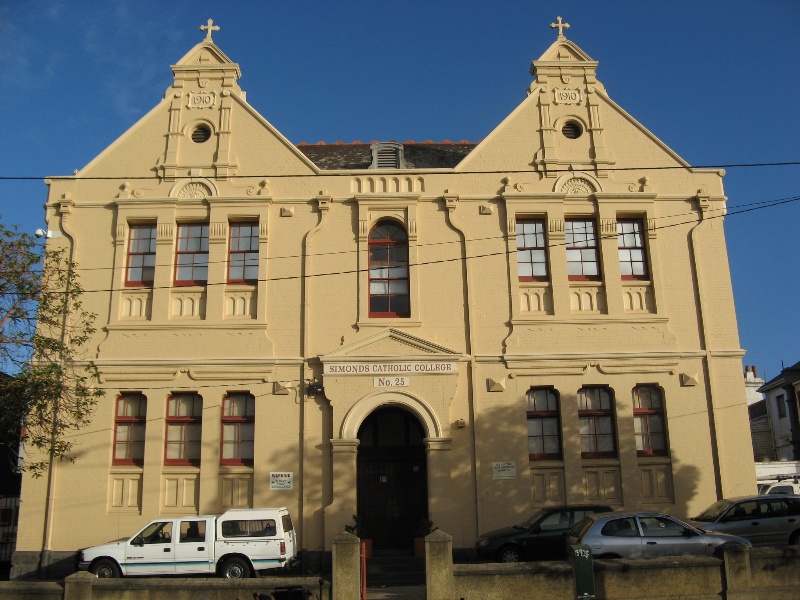 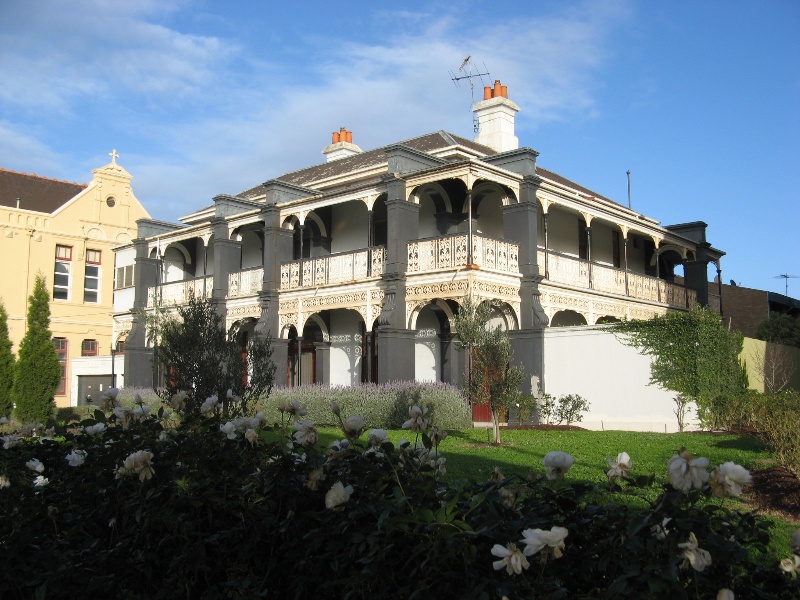 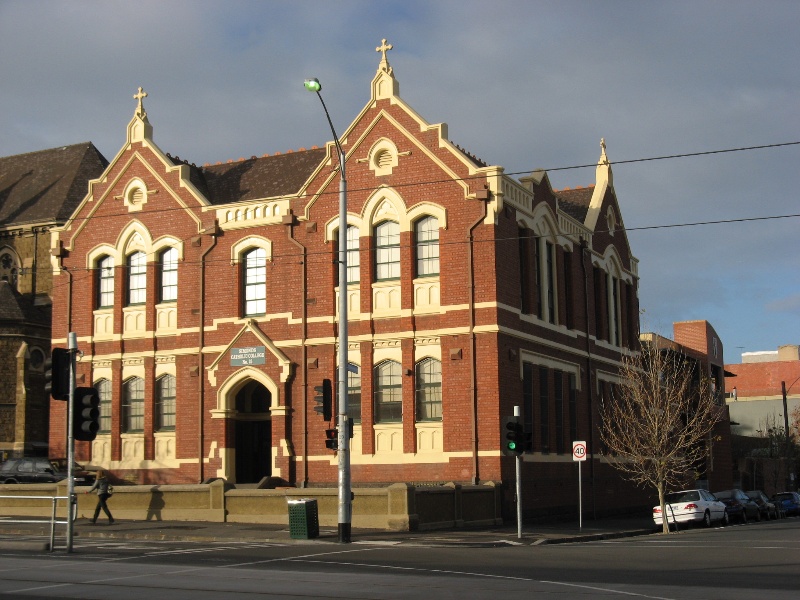 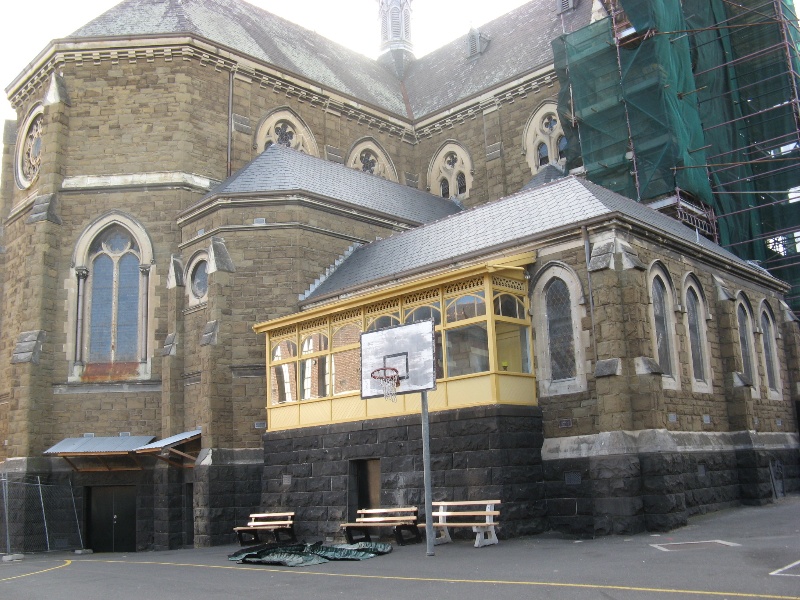 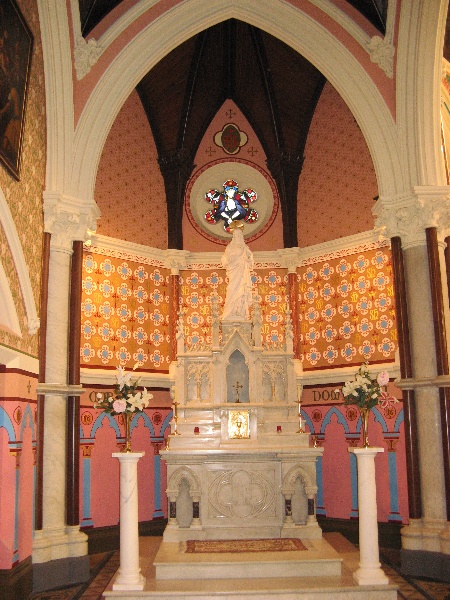 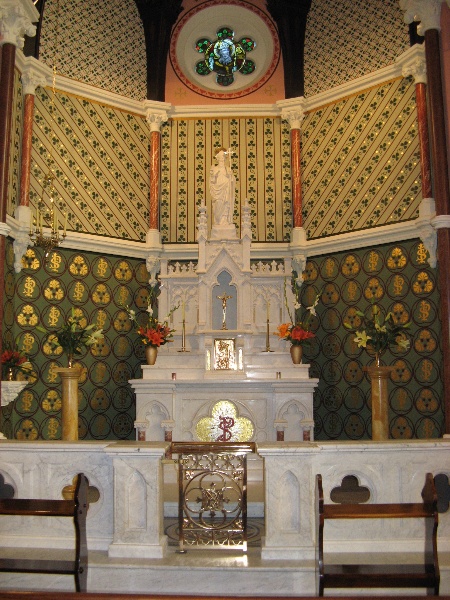 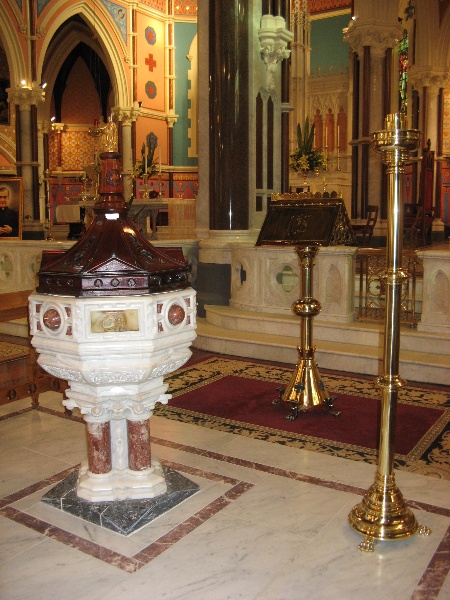 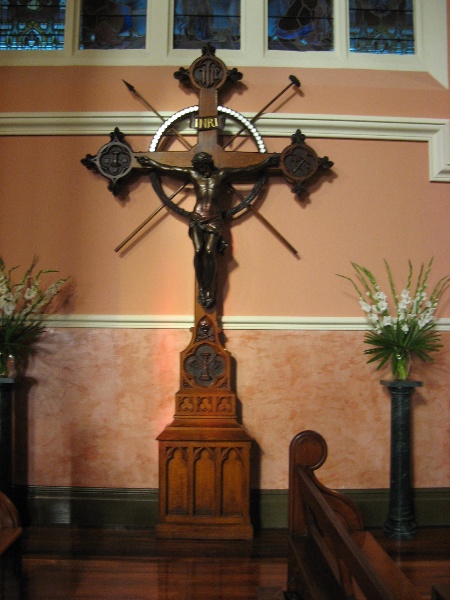 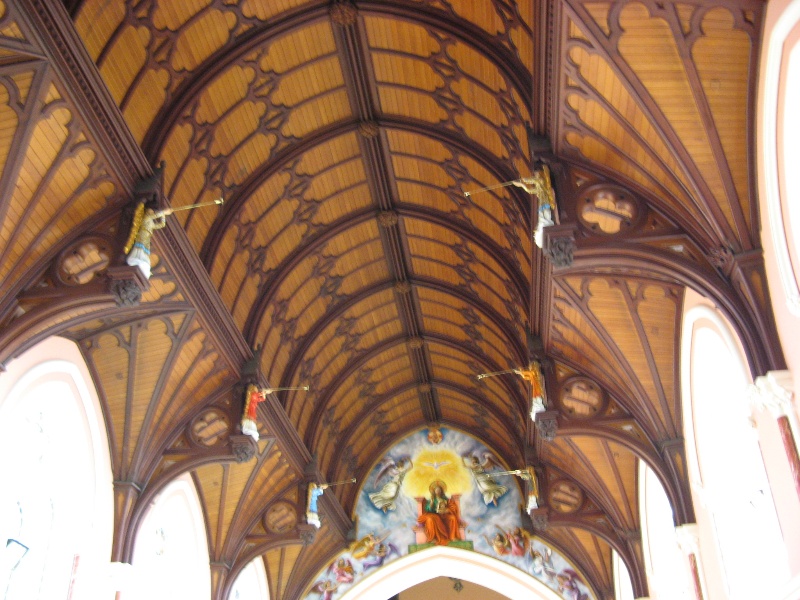 St Mary Star of the Sea was built in 1891-1900 to replace an earlier church built in 1854. North and West Melbourne became a parish in 1872 and in 1872-3 a presbytery designed by William Wardell was built for the first resident priest. In 1881 it was condemned due to faulty foundations and the architects Reed & Barnes carried out extensive renovations, with the addition of prominent curved buttresses and a verandah and balcony. The foundations of a new church were laid in 1883-6, but by 1889 there were concerns that the new church would be too small and it was resolved to begin again. The new building was designed by the architect Edgar Henderson and the contract was awarded in September 1891 to C W Crompton. The 1890s depression and lack of funds slowed work considerably and in 1896, with the walls still incomplete, Henderson left Victoria for Western Australia. He was replaced by the architect Phillip Kennedy who made a number of alterations to Henderson's design, and is credited with the final design of the roof and the interior. In 1897 the spire was eliminated from the design due to financial problems. In 1898 the specifications were accepted for a new pipe organ, a huge electric-powered three manual instrument by Fincham & Hobday. Windows were commissioned from the leading manufacturers in England, Germany and Australia. The church was officially opened on 18 February 1900 by Cardinal-Archbishop Moran of Sydney. The fixtures and fittings were supplied by some of the most highly-regarded artists and furnishers in Melbourne and beyond. With the completion of the new church the old one was used as a school. A new boys' school designed by the architects Kempson & Conolly was built on Howard Street in 1910, and three years later the old church was demolished and a girls' school designed by the same architects was completed in 1914 on the Chetwynd Street corner. The old denominational school south of the old church was converted into clubrooms (now demolished and replaced by a new school building). Further decoration of the interior took place in the inter-war period and in the 1920s the original timber altars were replaced by altars of Italian marble. The building and interiors underwent major restoration works in the early twenty-first century.

The St Mary Star of the Sea complex includes the church, the presbytery, and the boys' and girls' schools. The church is a Latin Cross plan French Gothic style building of brick faced with random coursed sandstone on a bluestone plinth, with limestone dressings, a slate roof and an incomplete tower on the north-east corner. The slate roof is embellished with a series of dormer vents, fabricated from sheet zinc. At the centre of the roof is a polygonal fleche of pressed zinc on timber framing, with louvred vents on the sides and surmounted by a tapering conical spire. The colonnetes flanking the window and door openings are of polished red Aberdeen granite. The total length of the building is 175 ft (54 m) and the height of the roof ridge is 75 ft 23m). The interiors are opulently decorated, with a strong Italian Baroque influence. The nave is painted pink and there is extensive use of high-quality building stone such as Swedish red granite in the nave columns, Carrara white marble for the transept piers and Pyrenean rose marble for the chapel columns. This is further enhanced by the reflective finishes of the mosaic-tiled sanctuary floor, the brass altar rails, the scagliola (imitation marble) of the colonettes and the polished timber, especially in the distinctive two-toned groined ceiling. The ceiling is lined with timber panelling, and painted statues of angels blowing trumpets stand on the hammerbeams. The church retains much original furniture and fittings, including its pews (1900), elaborate marble altars (1925-7) and font (1900), a fine set of Stations of the Cross by Peter Hansen (1901), a Mission Cross by James Curtin (1891), a Bishop's throne made for Daniel Mannix in 1913, and several notable stained glass windows made by prominent local and overseas craftsmen. The Fincham organ in the gallery is a large three manual organ with richly gilded and decorated pipes arranged on either side of a large stained glass window, possibly by Brooks Robinson & Co, and with a fine blackwood console. The presbytery is a symmetrical two storey rendered building with a slate roof, and a two storey cast iron verandah with unusual round-arched flying buttresses supporting the walls. The boys' school is a two storey symmetrical rendered Free Classical style building with a slate roof and with twin gabled parapets on the front elevation. The front facade of the girls' school has a very similar composition, but is of face brick with rendered dressings and has Gothic arched openings.

St Mary Star of the Sea is of architectural, historical, aesthetic, technological and social significance to the state of Victoria.

St Mary Star of the Sea is historically significant as Melbourne's largest parish church and as one of the most costly parish churches built in Australia, a reflection of the spirit of the substantial Catholic population, predominantly of Irish extraction, of the area in the late nineteenth and early twentieth century that helped fund its construction.

St Mary Star of the Sea is architecturally significant as unusual example of a church in the French Gothic style, and as a major example of the work of the distinguished architects Edgar Henderson, a Catholic architect who later achieved considerable success and renown as a designer of Catholic churches, schools and convents in Western Australia, and Phillip Kennedy. The complex includes an interesting presbytery designed by William Wardell and altered by Reed & Barnes and two early twentieth century school buildings by Kempson & Connolly.

St Mary Star of the sea is of aesthetic significance for its opulent interior, with imposing marble and granite pillars, an unusual timber ceiling, thought to be unique in Victoria, intricate marble fittings, especially the marble altars and font, Stations of the Cross by Peter Hansen and an oak mission cross by James Curtin. The magnificent stained glass windows are by prominent local and European makers, such as William Montgomery, Hardman & Company of London and Franz Mayer & Company of Germany

The Fincham pipe organ is historically and technologically significant as the largest example of nineteenth century indigenous organbuilding in Australia to remain essentially unaltered. It is the most intact surviving example of the work of the prominent organ builder George Fincham and was the last organ completed by Fincham himself. It is one of a very small number of surviving three-manual Fincham organs, and is believed to be the second largest organ, after that in the Sydney Town Hall, to retain a tubular-pneumatic key and action stop.

St Mary Star of the Sea is socially significant for its important role in the lives of the Roman Catholic community of Melbourne.