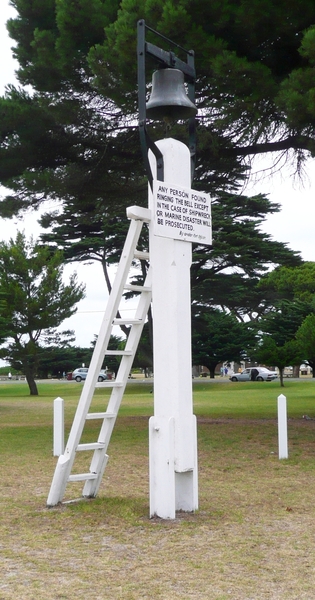 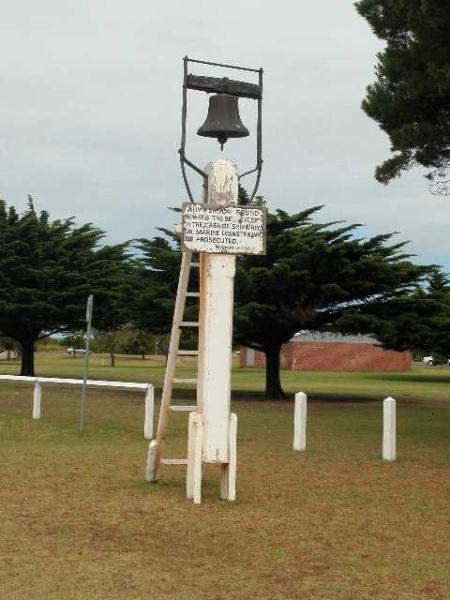 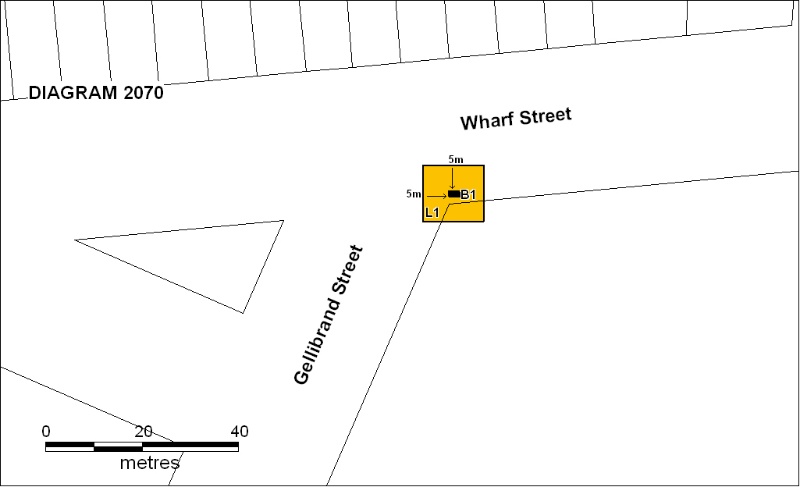 What is significant?
The Wreck Bell was a facility provided by the Ports and Harbours Branch to summon the crew of the Queenscliff lifeboat in times of a maritime disaster. The bell was cast by John Danks & Son, Melbourne, and the supporting structure erected by William Golightly (Jnr) in September 1891. It was placed in Lower Princess Park close to the residences of the fishermen who generally formed the crew of the lifeboat. The head of the lighthouse service was automatically the lifeboat's coxswain. When the lifeboat was required for assistance in a maritime emergency such as a search and rescue involving a shipwreck, the bell was rung to alert the voluntary crew. Prior to 1891, analarm bell mounted on the Signal Mastat Shortland Bluff was rung by the Signal Master to call out the lifeboat crew.

The Wreck Bell was used to call the crew on many occasions, the last being in 1974 when they were called out to a fire on the vessel Brisbane Trader.

There was also another wreck bell called the "Distress Bell", which was once located at the corner of Ocean Amphitheatre and Portsea Roads in 1965 but has since disappeared.

The bell, still in its original location, is mounted on a two metre high square timber post, which is supported and bolted to two upright rectangular timbers embedded into a rectangular platform base. At the top of the post, a bifurcated yoke belfry surrounds the bell. Below this, attached to the post on the western side, is a sign which reads "Any person found ringing this bell except in the case of shipwreck or maritime disaster will be prosecuted". The bifurcated yoke structure housing the Wreck Bell, along with the bell, platform base, and ladder are original.

How is it significant?
The Wreck Bell is of historical and social significance to the State of Victoria.

Why is it significant?
The Wreck Bell is of historical significance for its associations with the maritime history of Victoria. As an essential maritime facility involved in many shipping emergencies, the bell reflects the historical development of the port of Melbourne and the level of its shipping activity. The bell was rung every time the lifeboat was used for a major shipwreck in the Port Phillip Heads area from 1894 to 1974. Many of these wrecks were of interstate and international origins.

The Wreck Bell has historical significance as an intrinsic component of the maritime history of Queenscliff. It has strong associations with other important features of the maritime landscape of the region including the Queenscliff Pier, Queenscliff Lifeboat and Lifeboat Shed, Queenscliff Maritime Museum, Point Lonsdale Pier, Point Lonsdale Lifeboat (now at the Queenscliff Maritime Museum), the Point Lonsdale and Point Nepean Rocket Sheds, Shortland Bluff Signal Station, and shipwrecks in the Port Phillip Heads area. Marine rescue and the pilots' service were two essential services based at Queenscliff, and were responsible in part for the development of Queenscliff as a maritime service town. The location of the bell is highly significant, due to its proximity to the former lifeboat shed and the residences of local crew members. This site is also a significant example of the wider resource of lifesaving and maritime infrastructure heritage from around the State.

The Wreck Bell is of historical significance as one of only two extant wreck bells in Victoria. The other wreck bell, located at Lakes Entrance and built in 1881, is of a different construction method. The Queenscliff bell is the only example of a wreck bell with a bifurcated yoke structure in the state, the only other example known to have existed was erected at Port Fairy in 1884.

The Wreck Bell has social significance to the local community, especially the fishing community, many of whom can demonstrate generations of family members serving as the lifeboat crew.