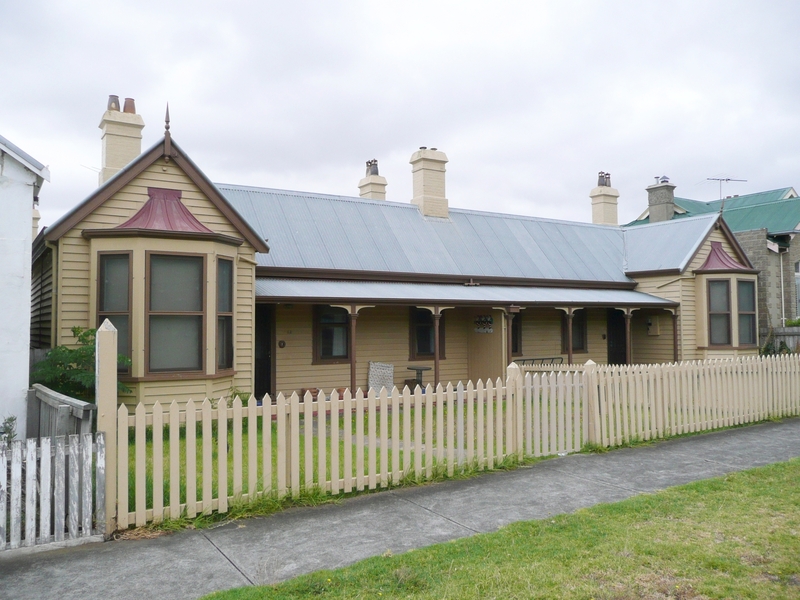 By 1850 all of the Port Phillip Bay pilots were instructed to reside either in Williamstown or at Shortland's Bluff. After the first land sales at Queenscliff, the land prices were seen to be relatively high and the pilots complained; sending a letter to the Argus in November of 1855.

Possibly, as a consequence of pressure like this, sections two and three were surveyed into small lots from 30 perches to 1 rood in area. Section two was the 'Pilot Reserve' and section three the 'Custom Reserve', there the customs house stood on allotments 11 and 12.

At the Stokes Street corner of the pilot reserve, the health officer's quarters were built (the health officer, Dr Robertson and his boat crew having been transferred from Point Nepean to Queenscliff) and, to the south, nine timber duplex cottages were constructed. Each was basically of four rooms, divided in the centre, with a single fireplace in each, placed back to back. They were without passages and hence were provided with external, gabled porches for shelter. Each was on stone foundations, each had a central brick chimney and each had a shingle roof and zinc spouting. The wall boarding is of softwood and very wide: hence it is probable that all of the timber was pre-cut and brought by dray from Geelong.

George Admans, Queenscliff builder and hotel owner, carried out his first construction commission in the colony by erecting these cottages after what he claimed was a long wait for material. Work commenced on the pilots' quarters under the direction of acting Colonial Architect, James Balmain, late in 1853. By mid 1854, the work was completed at a cost of £200 per cottage.

Of these nine cottages, only four were occupied by pilots by 1858: the balance being occupied by the health officer and his boat crew, who formerly had occupied quarters on the beach, and the police, for whom a reserve subsequently was created in 1865. The western half of the block became the property of the Presbyterian church (three lots in 1865 and a further four in 1868), whilst one lot was allocated to the mechanics institute for a library in 1872. The remaining two lots (19, 20) were sold to WJ Craig.

By the 1880s, Nos.60-62 Gellibrand Street was occupied as officers' quarters, following the establishment of the fort and the Victorian Artillery at Queenscliff. Builders, JC Taylor and sons, added a wing of three main rooms to the southern side of the house, which replicated an existing extension and added a verandah on the northern side. Both wings, their window bays and valances, resemble closely those of Warraine, 50 Gellibrand Street.

During 1886-7, a kitchen and washhouse were added to the rear of both halves of the duplex by WG Priddle and trellis work to the verandahs, in 1905-6. Hence little remains on this site of the original pilots' quarters of 1853-4, even the central chimney having been rebuilt and other chimneys added to the new wings. Perhaps the only original remnant is a change in floor level where the new wings were joined to the original houses.

Despite these changes, the duplex represents a rare building type and style combination in Victoria; that of domestic Gothic and row house construction. The window bays to each gable bay and their concave sheeted roofs, combined with simple timber capitals and brackets to the verandah (added), provide a convincing reminder of Pilots' Row. The building is intact within its vernacular, but the former picket fence has been replaced.

Nos.66-8 Gellibrand Street[NOT INCLUDED IN REGISTRATION]is all that remains of Pilot's Row. The porch entrances, with their lancet, twelve pane windows, the central hexagonal-plan chimney and wide softwood boards are all original. A concave roof verandah, panelled cast iron friezes and brackets, a verandah dividing wall, new fences, and a large gabled southern wing have been added probably during the period of military occupation. Ancillary rooms at the rear and marble mantels have also been added but sections of the wide softwood flooring remain. Nos.66-8 Gellibrand Street is a rare surviving use of timber construction by the new colonial government which is underscored by its verified early date of construction. It is thought to be the earliest building standing in Queenscliff. Synonymous with this is the unusual style and building type combination, as with Nos.60-2 Gellibrand Street.